Home » Entertainment » John Bermingham: All That Can Be

John Bermingham: All That Can Be 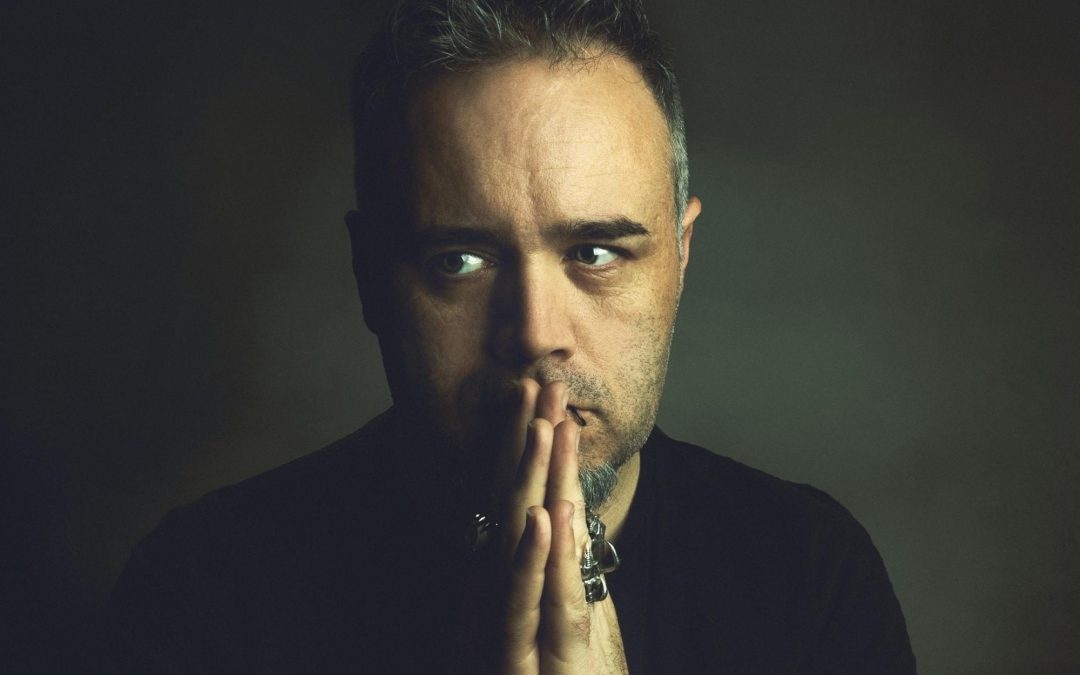 When John Bermingham left his job in HR in 2014, little did he know that six years later – he would have achieved some of the things he has. A renowned photographer, digital visual artist and video maker, there is little that Bermingham cannot turn his hand to – in fact, some might even argue that he predicted the COVID-19 pandemic.

Originally from Limerick but residing in Dungarvan for a number of years, John sat down with the Munster Express to discuss his work to date, the COVID effect, and his plans for 2021 and beyond. He spoke of his first forays into the world of art and entertainment.

“I’ve been out of Limerick longer than I was in it”, said John. “I used to work up in the HR & Payroll departments in Ardkeen Hospital in Waterford but I had always made music videos. All That Can Be is something I’ve done since I was a teenager, it was my email address growing up. When I started doing videos, I used to sign off with it. When I quit the day job to start doing these things, I just stuck with the name and that’s where it all came from.”

As someone who engages with multiple mediums, John is someone who does not necessarily classify as anything in particular – but his ‘niche’ areas for content are in the field of still photography.

“I think I do best with weird stuff. The thing that’s taken off the most with me is still imagery. Conceptual photography and com-positive imagery. Since I started doing those, I’ve been invited across the country to give talks in various camera clubs and that has been where I’ve focused a lot in the last few years.”

With regular invites to share his knowledge, techniques and creative visions across the country and the globe, for John Bermingham – the COVID-19 pandemic has thrown a spanner in the works, but like all of us, the virtual world has provided somewhat of a lifeline. 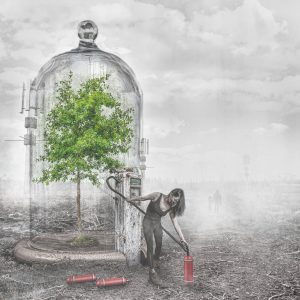 A Pail of Air.

“I was travelling to Belfast and all over the place giving talks and I was expanding my network but what happened last year was that a lot of clubs moved temporarily onto Zoom – and I started receiving some invites from places in the UK. I did some judging for a club in Australia, so in one way I actually got further during a pandemic than I had managed to do so before it.”

As someone who dedicates a lot of time into his projects, which can be seen in how he makes the supernatural appear so nonchalantly, there are many particular pieces which John takes great pride in, but one particular excursion in 2019 is what tops the pile.

“Two years ago, in 2019 – I did a series of images called Think About The Future. I got my Associateship with the Irish Photographic Federation for that series of images, but in it – I was taking things that were in the news at the time to what I thought was some sort of a dystopian extreme. I had everyone in face masks, it was called think about the future – and now, here we are! That brought a lot of people to contact me and it has always gotten a lot of reactions whenever I do presentations so I take great pride in that series of images.”

‘Think About The Future’ is a series of conceptual snapshots of a life permeated by plastic and pollution. A life of data-harvesting and digital tethers, where clean air and potable water are ever more commoditised. The birds, bees, and living trees are all but gone, and the creatures of the sea are becoming as myth. When the question was put to him, Bermingham agreed that sometimes for artists, one stand- out project can be the catalyst to take off overnight. 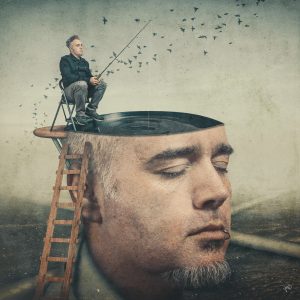 “I suppose that can happen but I don’t believe that I have taken off fully yet. I’m hopeful that there will be something that does that. Sometimes I meet people in Dungarvan who I don’t know, and I had been asked for World Speech Day to talk about that series of images – the event didn’t go ahead but the talk was recorded on YouTube, but people locally have come up to me and said that they recognise me from it. That was really nice to see.”

As someone with many friends in the entertainment sector, John is also someone who is considerably talented in the musical department. He has written and recorded music in his own living room and released an album in 2013.

“It’s on Spotify, YouTube, Amazon and all those music places and it’s called ‘Everything is Wonderful’. At the moment, Anna of Jordan’s Bar in Waterford City holds an online session every Tuesday and I just wanted to do something kind of different, so I had multiple versions of myself making the sounds of my own voice – but I have a lot of music videos that I have made of my own original songs as well.” 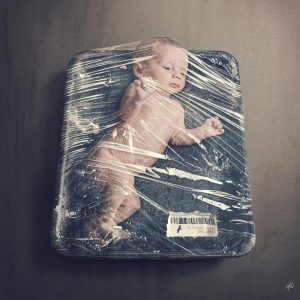 Despite having worked in different fields, the dream of working in this field has always been there for the Limerick native.

“I had poems published when I was 16, I loved writing, drawing and I loved making music. I used to make little short films with my toys. My Grandad had a camcorder and I used to make videos, it was never just one thing for me. I got my first still camera when I made my confirmation. The local shop, they had this camera and it was one with plastic film so I went down and got a camera when I was really young.” As technology gets progressively more expansive, there are no limits as to the license to
experimentation readily available for content creators such as John to develop.

“Definitely. Especially with video stuff. What we have at home now is probably better than what visual effects houses had even in the 1990s. Whatever you can imagine now, you can put together at home. With my own work, everything that’s in my images is either photographed by me, painted by me or it’s something that I’ve created. There’s so much you can do on phones now and I often think if this technology was available to me as a teenager – I probably wouldn’t have ended up doing admin jobs for half of my adult life.” 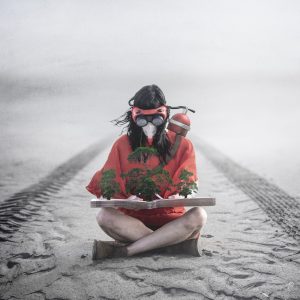 In Memory Of Trees.

In terms of the overall 2021 pipeline, all going to plan – like everybody, it depends on the COVID situation.

“I had hoped last year to do an exhibition of the ‘Think About The Future’ stuff but obviously that didn’t happen. A couple of weeks ago I spoke with a gallery about an exhibition but again this is dependent on restrictions. I hope to go for my Fellowship with the Irish Photographic Federation and that’s something I’ll be working on throughout the year.”

With his living room being his office, there’s no lack of motivation for Bermingham, it’s easy when you do what you love for a living. In terms of advice to young people wishing to go in the same direction, the advice is simple – just do it.

“Just do it. I don’t like saying 20 years ago, but 20 years ago for me there wasn’t this many courses around and I didn’t have the confidence to say what I really wanted to do and I just ended up doing computer stuff and working in everyday jobs so I wish I just pursued things sooner rather than when I did.” Bermingham says living in Dungarvan has made a positive contribution to his work.

“From a personal point of view, I like Dungarvan so much. There’s so many things at my fingertips here in terms of scenery and things that I can use in my work. For my own mental well-being, I love being by the woods, sea, mountains so for me I think it’s enhanced my work simply in the sense that I’m happy here.” 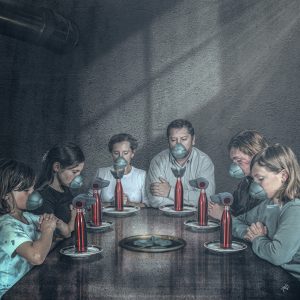 The Family That Breathe Together.

While there are not many positives to take from the COVID pandemic, John Bermingham is one person who has benefitted from the temporary virtual insanity which Jamiroquai once alluded to. Right now, while playing a waiting game for bigger and better opportunities, Bermingham is biding his time with expertise and continued excellent output.
The greatest praise that I could give to John Bermingham is that his work makes the most unthinkable of things thinkable, it provokes thought and question and is a reminder of the strange and ever changing world that we inhabit, it’s fragility and all its brilliance. When the world goes back to ‘normal’, whenever that may be – expect John Bermingham to be a name you see and hear of far more often, and maybe, just maybe – think, about the future.

For John Bermingham, hopes for the future include directing, starring in, writing and producing a film. I wouldn’t put it past him to win an Oscar in every field. Consistently challenging our perceptions of every day life, a look down John’s lens is certainly a worthwhile venture.