Following the launch of the new Air France service form Cork to Paris route, we availed of the opportunity to connect with the French south west from Charles De Gaulle (CDG).
We took a one and a half hour flight south to Montpellier, the educational capital of the south west, which is now a strong tourist city.
We marvelled at the great attractions form period buildings to great squares, great vistas to the south and the mountains, in addition to the sea.
The most pleasant experience was watching the sun go down on the first evening at the west facing Arc de Triomphe, similar to the more famed arch in Paris, in a park full of picnic diners and romantic couples. Nearby is the lovely Jardin des Plantes, full of tropical plants.
A walking tour of the city is a must, although there’s a lot you can do on your own too. Our tour guide showed us the old town, the fine cathedral, old churches and a synagogue. The Cathedral of St. Pierre is impressive, and there’s much Benedictines heritage in the city. Tours run from 2.30pm from Tourist office on Place de Comedie, close to St Roch Station and the tram intersection.
At the Synagogue we learned about the Mikwe Bain (or bath) for women, which they would have as they married and planned for children. They had a warm open bath which was discovered after recent historic digs in the city. The symbol of the bath was to give life and it was also symbolic of fertility and cleansing. So Montpellier is a diversified city today with many Arab, African, Asian and other EU citizens both working and studying there. We learned much about French military strength along with the invaders such the Moors, the Nazi occupation during World War II in addition to the returnees from the Algeria war of the 1950s and 60s. 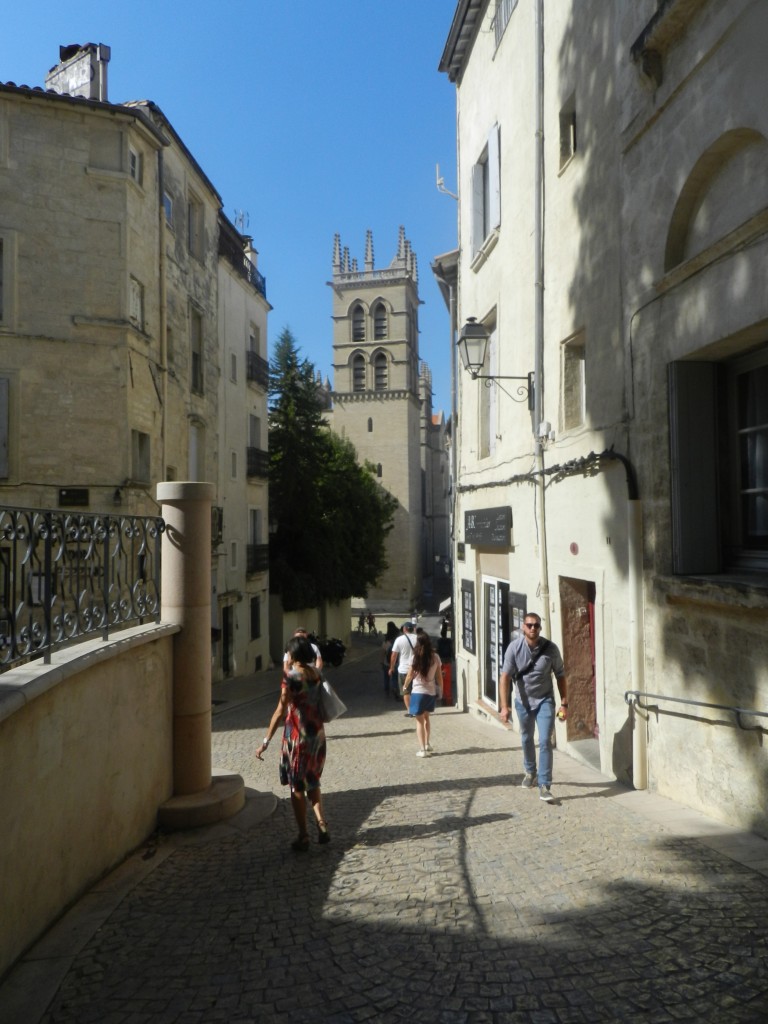 The old town in Montpellier

The latter were called the “Pieds Noirs” (black feet): they got the name as their feet were burned by the sun. They resettled in France, primarily in the south after forcibly leaving Algeria and other places in North Africa. They would have originally been French colonisers and brought their ingenuity and culture with them back from Algeria to France.
The Jews also left a big mark at Montpellier in terms of medicine and with their local doctors created the best medical schools in the south of France. The Jewish influenced extended to some advanced medical treatments and blended this with local practices. Today there are huge numbers of students here, in addition to top medics and engineers. Sanofi, who have a factory in Waterford, have a major plant here too as do other pharma industry giants.The city’s 300,000-strong population is one quarter students with another quarter retirees, with many of the latter coming to the warmer south from the North and Paris to retire in the hinterland, where property prices are lower.
It’s a lively, safe city with tourists and students aplenty. This means lots of bars, restaurants and places to hang out for young and old, along with various ethnic foods; we even tried Vietnamese, which proved good value. Outside the university terms, tourists flock here in summer. Shopping is also very good, we also saw many quirky shops like old book stores and antique shops, classy design shops plus artisan food ones too, not to mention wine with the local Vin de Herault. The great food market stalls, near the squares of Jean Jaures, are also worth checking out.
Long ago as a graduate student, we did some grape picking nearby, inland from the city, We revisited the old village of St. Matthieu, now thriving with commuters to the expanding city of Montpellier. We met Tramore man Matt Dolan who has married a local and has settled here too, with good value housing compared to Ireland.
The wine grapes are from the Herault and Languedoc region and the appellation is Pic de Loup (Wolf from the Hills) which is a good brand name.
In early September, the wine harvest was underway, so we went to the local vineyard and saw them bring it in and the local person in charge knew Ireland well, having completed an Erasmus year in Limerick at UL.We asked about the current crop, but she said it wasn’t a good year weatherwise due to much rain, a cool April and an unseasonal May. This proved bad for the crop making it too moist. Some farmers may even have to write off the crop and seek financial aid from the local co- ops – they too had snow in March just as we did.
Today, the grape picking is done by machine and quality appraised in our day it was just vin de table and cheaper. The white grapes picked first then later the reds.
Local café charged €1.50 for a glass of wine only. Back in the city, you can dine well with many choices go for the plat de jour for the best price option, from €12.
If you want to check the coast take the tramway and go to Palavas, a host of good beaches are just a tram/bus ride away but buses stop at 8pm we were lucky that a local offered a lift back.
A day pass on the tram came to just over €4. 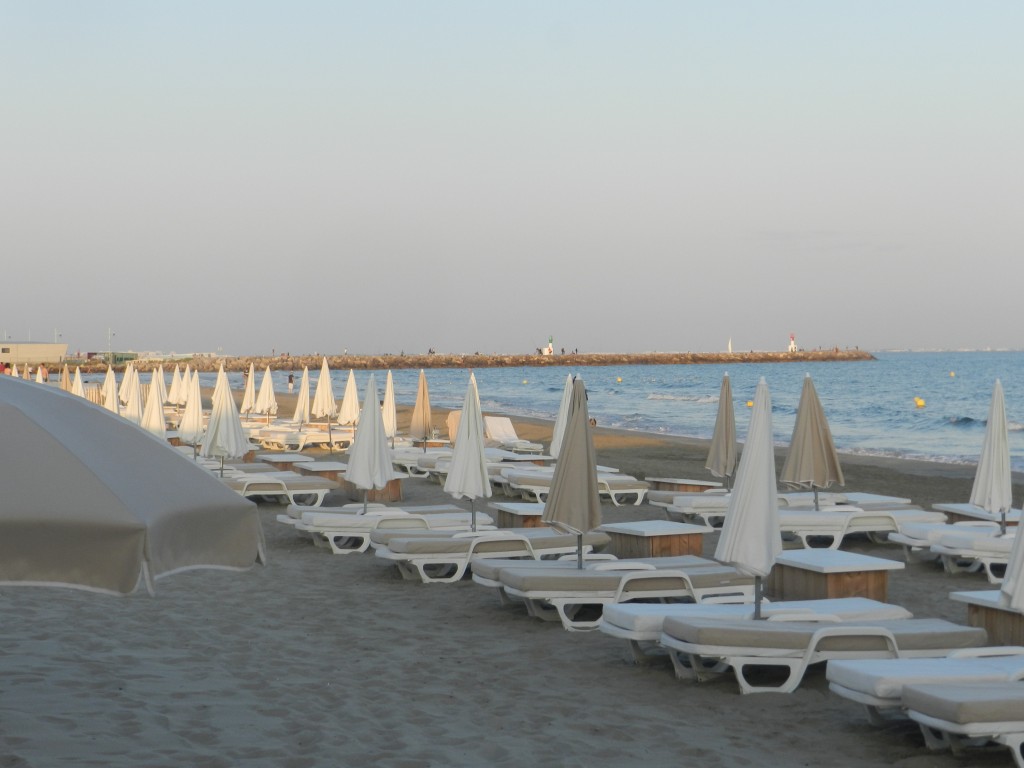 There were many excellent beaches and lovely caves nearby – we were there decades ago but thankfully the area remains without overdeveloped, albeit with some decent upgrades. With hotels from IBIS to four star, you can get hotel rooms for under €100 with €200 charged by the four star Palavas Palace Hotel. We found a hotel near Comedie Square, in Montpellier for under €100 while Air B n B options start at €40. The south west we felt is less brash than the Riviera and more earthy, with tourists not too numerous.The locals proudly love their city but welcome outsiders too, we met people from there from Germany, Holland, UK and Ireland. Local residents include People from former French colonies in Africa and Pacific, who like the warm climate and Spanish settle here too.
We found that there is a wide possibility of interests from history to shopping and sightseeing. The city boasts also an excellent tram system.
Unlike Ireland the Romans were here as they invaded Gaul and many others came in their wake like the Saracens.
The Spanish Inquisition brought Jews to the area while in the 1930s Spanish refugees fleeing the Civil War would settle here too. The French revolution was tough here also with many churches destroyed and ransacked. Sportswise, Montpellier is improving on the rugby front and will host matches during
the 2023 World Cup as a venue. In terms of art, try the Fabre museum, near Comedie square in the city centre, which features , Picasso paintings. He spent some time here as did others like Dali escaping the Spanish Civil War in Spain. There are also some Nazi era points of interest too like the prefecture at Foch and stories of the occupation in the Fabre museum.
Place de Comedie is a great place to grab a coffee or drink in main square before meandering the medieval lanes. You can also try out the tramway too towards the coast or rent a bike and cycle there towards the dunes. Or why not try a drink near St Anne Square, where you’ll find Carolan’s or Fitzpatrick’s bars for live music. Café des Artists pours a happy hour pint for €3.50 and you can also admire the fine Haussmann designed buildings and 19th Century architecture. Montpellier deserves at least two days of your attention given what it and its environs have to offer.
Getting There…
With Air France: Cork or Dublin to Montpelier for €279 return. Arrive in Paris, changing from Terminals 2e to 2f at CDG. From Montpelier Airport you can take an airport bus to the tramway system for under €5.
Via train: It’s three hours on the TGV Gare de Lyon in Paris – book in advance for best fares from €70 euro each way (approx). The Air France option maybe the best with through fares.
Car: Montpellier is a long drive from the ferry ports. You can go via the west of France Roscoff/ Cherbourg to Bordeaux via Lyon from Paris or west coast to Bordeaux and across the foothills of the mountains or via Poitiers after La Rochelle/Tours.