In last week’s issue, Noel Connors spoke about his love of his native village Passage East and the day they won the Waterford Senior Hurling Championship for the first time.
He also looked back on Waterford’s amazing year which saw them being crowned National League champions and he outlined his ongoing study at WIT and his research for his ‘Self Identified Practises’ project.
During the past few years there has been a lot of debate about the overall structure of hurling and indeed football and Noel has his own views on the current situation.
And when former Kilkenny star Eddie Brennan stated that the Walsh Cup “had run its course” it added fuel to the fire.
“As I already mentioned, I believe that the Munster Senior League is a great idea because it gives young players a chance to play senior hurling. 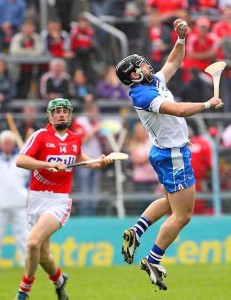 “The Division 1A League and Division 1B are really competitive competitions and because of that fact it’s not possible to play young players in any of those games because every game is vital and that’s a fact so it’s important to have the pre-season tournaments.
“I’m happy enough with the league set-up because you get the chance to pit your wits against the best players in the country but what I would like to see in time is a Champions League style format which would include midweek games.
“Perhaps we could play matches on a Wednesday and then on the following Sunday. If that idea came in to place I would like to see the competition completed by early May and then we could crack on with the Championship games.
“I will admit that it would take it’s toll on bodies but the way we train now I think players would adjust to the programme. Young children growing up begin playing hurling at a very early age.
“They run around the yards and fields and we have seen them here in Waterford pretending to be Dan Shanahan or Eoin Kelly and Ken McGrath and that’s wonderful but eventually when they blossom into a senior hurler and become good enough to line out for their county they may only get the chance to play two Championship games so yes I would like to see the current situation changed in that regard.”
Noel admitted that the training regime has changed dramatically in recent years and he paid tribute to a man who joined the Deise’s backroom staff last year.
“We train on a number of nights and hen we are not together we still have to remain loyal to the strict rules and regulations laid down. You can of course eat and drink what you like but if you do that you won’t get a game, it’s as simple as that and you will be out on your ear.
“Don’t get me wrong because we are not looking for sympathy or anything like that because we love what we are doing.
“When last season came to an end, those of us who’d been in the (Waterford) panel began getting itchy feet after a few weeks and it was great to get back and get stuck in again.”
Noel added: “Last season, Derek McGrath brought in a chap called Stephen Barrett and I can only describe him as a fantastic individual. He’s a lecturer at WIT and he has been a professional cyclists for Ireland and he has also worked with the Irish boxing team.
“He’s present at every training session and he is always available to take a telephone call or to even turn up on your doorstep and I have become great friends with him. He’s a Cork man but he is slowly becoming a Waterford man and what he has done for us it amazing and I truly believe we would not be in the good place we are now without Stephen!
Needless to say the name of Derek McGrath popped up in the conversation and Noel was fulsome in his praise of the Deise manager.
“I’ve been extremely lucky to have played under Derek for a long time. We go back to the great Harty Cup days when we also won the All-Ireland title and I genuinely believe that a lot of people don’t understand the amount of work he puts in every day of the week. He lives and breathes Waterford hurling and he will never come out and speak in public about what he does.
“When you take into consideration that he also puts everything possible into his role as a teacher you get some sort of idea of what a special person he is. He is also a husband and father of two young children and we all have the greatest admiration for him and we will try and win silverware for him this year and not for ourselves. So I’ve been blessed to have learnt from Derek as both a student and as a hurler.”
The countdown is now well an truly on to the opening game of the League against Kilkenny on Sunday next and it’s a match Noel is looking forward to. 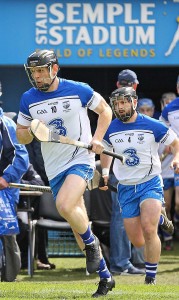 Noel following Kevin Moran out of the tunnel prior to last year's National Hurling League Final.

“Without doubt, it’s going to be a massive game. It’s the League champions against the All- Ireland champions and Walsh Park will be packed and these are the type of games you dream about playing in when you are a little fella growing up.
“We will have to be in tip-top form to beat then because lets face it they have been the greatest team for over 15 years but we will be ready for the challenge and we will not be found wanting. We are all very close together in the panel and we will give it everything we have” admitted Noel.
Waterford of course will play Clare in the Munster Championship when and Noel spoke about the decision of Donal Óg Cusack to link up with the former Waterford manager Davy Fitzgerald in the Banner County.
“I suppose it was a strange move in some ways but I would imagine when he weighed up the pros and cons he saw the attraction that there is in Clare. People may think Clare are on the way down but you have to remember that they were the All-Ireland champions in 2013.
“They have had incredible success at minor and especially Under-21 level in recent times so Donal Óg clearly knows Davy and himself have a lot to work with – and our game against them in the championship will be a cracker.”