MATT KEANE MEETS
The blue eyes of the gravelly voiced Tosh Lavery (aged 62) often sparkle during the full flow of conversation, but when recalling his past both as a member of the Garda Sub-Aqua Unit and as a family man, they can occasionally dim.
There’s no doubt whatsoever that the 30 years he spent with An Garda Síochána took its toll on Tosh but nevertheless he remains one of life’s great enthusiasts and remains heavily involved in helping relatives of those who have been missing for many years. 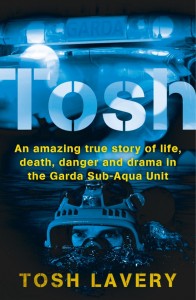 Tosh has worked on many missing person cases along with high profile investigations such as the Whiddy Island disaster, the Lord Mountbatten assassination (both in 1979) and the 1996 murder of journalist Veronica Guerin.
He admits freely that he became obsessed with a job that demanded utter dedication and total fearlessness and in may ways it was an ideal job for a maverick like him.
But along the way he battled alcoholism and his marriage fell apart and he simply had to turn his life around and thankfully he is now in a much better place because.
Drink is now a thing of the past for him, his personal life is also back on track but the ghosts of the past inspired him to write a book which was published last year and “Tosh, An Amazing True Story of Life, Death, Danger and Drama” is a fascinating read and it has in some ways been a slow burner because it’s only since the turn of the new year that the national media have latched on to his extraordinary honestly.
Last week, Tosh paid a quick visit back to his native city and looked back at his life in full detail when I sat down with him.
“Ah Jesus, Matt it’s great to see you again,” he began, clasping my hand tightly. “You were a Ballytruckle boy and I was a Pearse Park boy and then of course we had the St John’s Park lads who were nicknamed ‘The Johnnies’.
“We used to play soccer on the street from morning until darkness fell and from time to time we used to play against each other. They were super days.”
Continuing, Tosh spoke about his family and his memories of growing up in an area he still calls home.
“Our parents were from Limerick but they came to Waterford and I was born here. My sister Eileen was born in Tipperary. Our parents worked in Richardson’s and they worked bloody hard there.
“Our father worked with the jersey cattle and our mother worked in the dairy. We all lived in a little house on the farm but it was to small and a priest called Father Power got us a house in Pearse Park.
“Lionel Richardson, the owner of the farm told my mother not to have any more children (she had five kids at that stage) so that’s why we had to leave in the first place.”
Tosh added: “One of my brothers was born in Pearse Park and the rest of us apart from Eileen were born in Richardson’s. I can remember a man called Maurice Foley coming along in the middle of the night with a little coal truck which he owned and he moved all of the furniture into our new home in Pearse Park.
“Fr Power also helped my father to get a job in Clover Meats afterwards. The boys slept in one room and our sisters slept in another room. I can remember when one of of my brothers Milo joined the FCA and I was delighted because he got a heavy green coat and that used to keep us warm.
“We used to play football with Martin Dunphy and Tony Dunphy and that was great because of course Tony went on to play for many seasons with the Blues.
“Another memory I have is going to the games in Kilcohan Park during the great days of the 60s and early 70s. We used to walk up to the St John’s Park side of the ground and we had a secret entrance which we used to climb under.
“My father used to have cones outside our house to help with the parking because the cars used to be back down as far as Poleberry and right up to the top of St John’s Park and I will never forget players like Peter Thomas, Johnny Matthews, Paul Morrissey and Jackie Morley.”
Tosh joined the Garda at the age of 18 and he has mixed views on joining so young. “After I completed my Leaving Cert I applied for a job in a bank, as well as the Cadets because I thought I was too small to be a Guard. But at that time the Minister for Justice Des O’Malley lowered the height restriction to 5ft 8 inches from 5ft 10 inches and those of us who got selected at that time became known as ‘O’Malley’s Midgets’.
“Lots of guys from Waterford attended the interviews including Martin Barrett (now a car dealer in Waterford). Sergeant Johnson was one of the men who interviewed us and I couldn’t believe it when I was one of the first people selected to head off to train in Templemore. Eventually 500 of us graduated and I was posted to Ballyconnell in Cavan – it was 1972 and ‘The Troubles’ in Northern Ireland were in full flow.
“To be honest we didn’t even know what we were doing there but it was funny because I had never really been away from home before, apart from a day out in Tramore or Woodstown or, if I was lucky, a day at the Dublin Zoo and here I was in Cavan.
“One night I was standing on a bridge for about half an hour and shortly after I had walked away, the bridge blew up. To be honest we did not realise the danger we were in, at least I didn’t because I used to dive into the harbour here at home when I was young and I never had any real fear worth talking about.
“I became friendly with lots of people in Ballyconnell and I used to go around drinking there and that was easy because there were 10 pubs in the town and it was a tiny place. When I used to come back to Waterford I would drink at the Mansion House and although I didn’t know it at the time that was the period of my life that drinking was beginning to become a problem.” 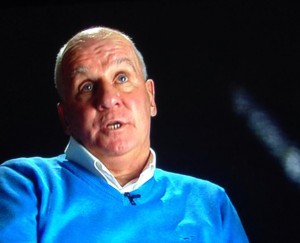 Tosh Lavery: a man with an incredible story worth sharing.

Tosh added: “It wouldn’t be fair to say that my job was the reason for my drinking problems but having said that you simply had to have a few drinks after you had taken dead people from a river someplace. It’s something I will tell you about later.”
Tosh then looked back at his entrance into the Sub-Aqua team at this point. “The first official unit was founded in 1974 and I became member with a Sergeant and eight other men at that time and I remained with them until I retired in 2004. We had no real training and we had to learn as we went on.
“I can recall one particular occasion I was diving for a body with a colleague I could hear him panicking and his breathing was all over the place so he had to be taken out of the water also. We had no training whatsoever so we all went to the pub and that included doctors, nurses and firemen.
“I was over 20 years in the Guards before I went on a diving course and the Sergeant in Scotland where we did the course looked at me and he said ‘what are you doing here you auld fella, sure you have seen it all’ and I was a Sergeant at that stage having been promoted but to be honest that course meant nothing to me because there were no corpses there.
“We were diving down into a tank of tadpoles and asked to tie up nuts and bolts. It meant absolutely nothing to me and that’s the truth.
“People love to see the Garda Diving Unit arriving at the scene of a tragic incident because they know there will be a realistic hope that the body of a loved one will be recovered and that’s why I am now involved with the organisation that deals with missing people.”
Although Tosh freely admits he has had his problem with alcohol but he is equally as proud of the fact that he has been dry for a very long time.
“I began drinking at the age of 17 but I have not touched a drink now for almost 28 years and I didn’t drink during the last 16 years of my career in the Gardaí so, yes, I am proud of that fact’.” We’ll continue Tosh’s story in next week’s edition.