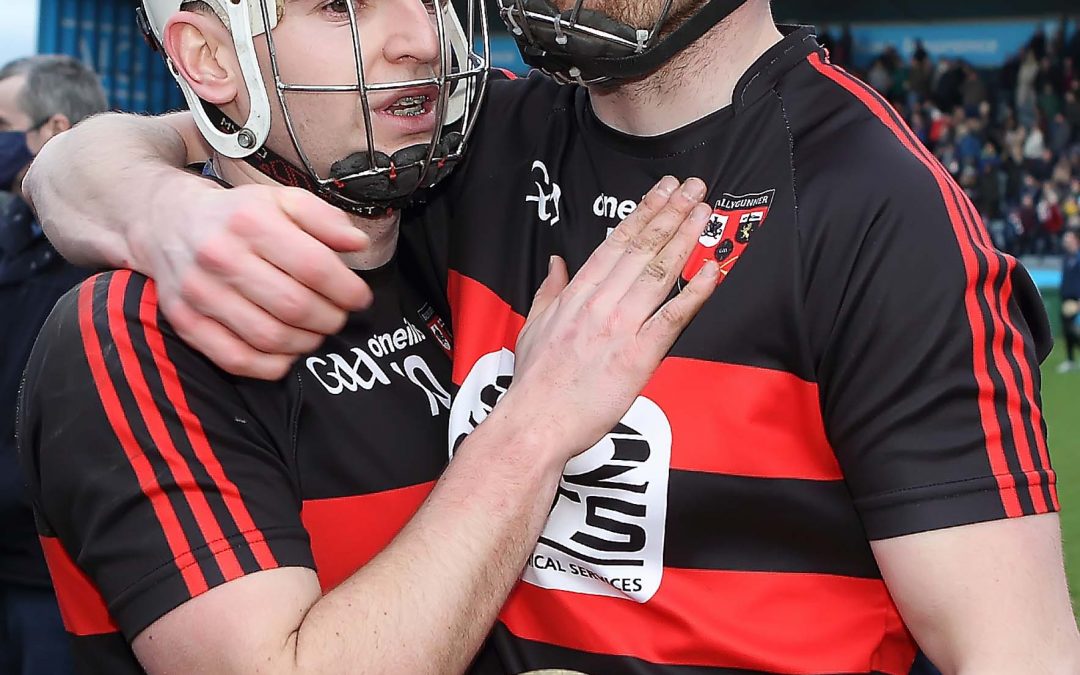 Brian Flannery
Waterford and Munster senior hurling champions Ballygunner have reached the promised land of an All-Ireland club final after an exciting five point victory over Ulster champions Slaughtneil.
Conditions were as ideal as you could reasonably expect on a January afternoon with the pitch at Parnell Park also in good condition for this All-Ireland semi-final.
A goal at the beginning of each half from man-of-the-match Billy O’Keefe was instrumental in earning Ballygunner a date against reigning champions Ballyhale Shamrocks (Kilkenny) in the final on the weekend of 12/13th February at Croke Park. 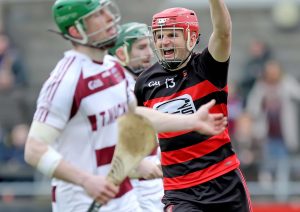 Celebration time for Ballygunner’s Billy O’Keeffe after scoring an early goal for his side. PHOTO: Noel Browne

The Waterford winners had the perfect start with early points from Conor Sheehan and Kevin Mahony but were soon to get a major boost. After three minutes Pauric Mahony pirouetted on the left wing to send a beautiful cross-field pass to the in-rushing Peter Hogan who had manoeuvred behind his marker and drew the remaining defensive cover to allow Billy O’Keeffe to shoot to the net from close range, 1-2 to 0-0. It could have been even better with goalkeeper Oisin O’Doherty doing well to repel Dessie Hutchinson’s volley in the fourth minute.
The Derry men did recover from this early body blow with Brendan Rogers, Brian Cassidy and Jerome McGuigan all landing points to reduce the margin back to a single goal, 1-5 to 0-5 at the opening water-break.
Slaughtneil operated with their number 12, Gerard Bradley operating as a sweeper just in front of their full-back line as their number 13 Mark McGuigan sacrificing his own game to man-mark ‘Gunners usual free-defender Philip Mahony. This meant Tadhg Foley initially and later Shane O’Sullivan now operated in that ‘free’ defending role at the heart of the Ballygunner defence.
This tactic did work for certain periods with Philip Mahony largely out of the game and Gerard Bradley intercepting many of the ‘Gunner’s attacks. 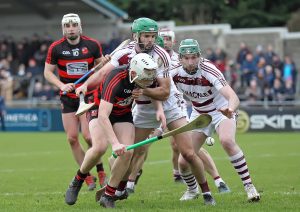 The Ulster men shaded the second quarter 0-4 to 0-3 and margin was down to a mere two points, 1-8 to 0-9 at the break.
Conor Sheehan’s reputation as an outstanding mid-fielder continues to grow with Sheehan again scoring immediately after the break. Gerard Bradley fumbled the sliotar moments later to allow Kevin Mahony to gather and once again it was Billy O’Keeffe being the right man in the right place to register his second goal and double his team’s advantage to six points 2-9 to 0-9, after 31 minutes.
The task now looked to be beyond the Derry men and three points on the bounce from Kevin Mahony, Mikey Mahony and Peter just before the second water-break left Ballygunner leading 2-13 to 0-12 heading into the final quarter.
Surprisingly talisman Pauric Mahony was off-target with three successive frees after the restart with Billy O’Keeffe instructed to take over responsibility for placed balls. This was an afternoon when Billy O’Keeffe could do little wrong hitting another point from play to put Ballygunner now eight points clear, 2-14 to 0-12 with just 12 minutes to play.
The Derry champions to their credit never quit and four points in a row from the excellent Brendan Rogers (2), Brian Cassidy and Cormac O’Doherty brought the margin back to a more manageable four points. Ian Kenny and Tadhg Foley was outstanding in the Ballygunner defence as the pressure mounted with the Derry side now in search of goals as time was winding down.
Billy O’Keeffe (f) and Dessie Hutchinson (2) pointed to ease the nerves of the large black and red following in the stand before the end of normal time. Shane McGuigan did register an injury time goal for Slaughtneil but the final score of the game went to Kevin Mahony to copper-fasten a famous victory for Ballygunner.
Stephen O’Keeffe was as assured as always on goal with Ian Kenny and Tadhg Foley outstanding in defence for the winners. Conor Sheehan was the best mid-fielder on show with all six forwards making valuable contributions.
The scoring abilities of Dessie Hutchinson, Kevin Mahony and Peter Hogan were crucial in keeping Slaughtneil at bay. Billy O’Keeffe was well deserving of the crystal on this occasion. Indeed Billy O’Keeffe has now scored 5-8 since his switch to attack from the opening round of the Munster championship.
Slaughtneil claim much plaudits but no victory. Karl McKaigue, Shane McGuigan and Meehaul McGrath all had good moments with Jerome McGuigan, Brendan Rogers and Brian Cassidy more than holding their own against the pre-game favourites. 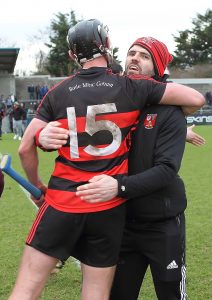