Bohemians 1 Waterford FC 3
Waterford FC recorded their second win of the season in Dalymount Park on Friday night last when they proved too strong for a Bohemians side who fielded a lot of young players due to the fact that they were facing an FAI Cup semi-final against Cork City on Monday. The home side took an early lead but that was a good as it got for Bohs and Waterford went on to totally dominate the remainder of the contest. The three points gained moved the Blues closer to European football next season.
Blues boss Alan Reynolds made one change to the side that defeated Shamrock Rovers with Bastien Héry replacing Noe Baba, while his opposite number Keith Long made nine changes ahead of the cup clash with the Rebels, and it showed as Waterford were dominant all over the park. 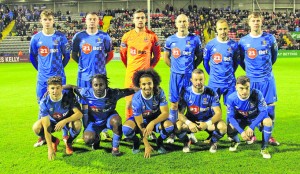 The Waterford FC Team that defeated Bohemians at Dalymount Park

After a tentative opening, the home side struck for the opening goal on 16 minutes. Eoghan Stokes played the ball out to Jamie Hamilton and his cross was brilliantly steered to the net by Cristian Magerusan giving Blues keeper Niall Corbet no chance from 10 yards.The lead lasted less than three minutes.Dylan Barnett did well to put in a deflected left-wing cross with his right foot and Sander Puri scored for the third game in a row when he bundled the ball past Colin McCabe from deep inside the penalty area. A third goal in an amazing nine-minute spell came for the Blues from the penalty spot on 25 minutes. Noel Hunt sent Sander Puri clear on goal but he was dragged down by defender Paddy Kirk, leaving referee Sean Grant with no option but to point to the spot.
Stanley Aborah assumed responsibility from the penalty spot and he duly sent Bohs keeper Colin McCabe the wrong way.
Garry Comerford went close to extending the Waterford lead just past the half hour mark when he rose highest in the area to get on the end of Aborah’s right-wing corner kick, but Comerford’s header was just off target.
Cory Galvin cracked in a long-range effort for the first chance of the second half on 52 minutes when he let fly with a right-footed shot, but the ball sailed over the bar.
Niall Corbet came to Waterford’s rescue sixty seconds later when Eoghan Stokes released Cristian Magerusan clear, but the Blues netminder got down well at his near post to save
A comedy of errors from Bohs led to a third Waterford goal on 55 minutes.Sander Puri charged down a clearance from Colin McCabe and when Dan Casey played the ball straight to Noel Hunt, the striker found the net with the aid of right-hand post.The width of the crossbar denied the Blues a stunning fourth goal when Cory Galvin picked up possession of the ball on the left-side of the penalty area, but his cracking effort, that had keeper Colin McCabe beaten, came crashing back off the underside of the woodwork.Dean O’Halloran nearly put the icing on the cake with a brilliant effort on 83 minutes when he took a pass from the impressive Cory Galvin, but the substitute’s well-struck effort from the edge of the penalty area just cleared the crossbar.