Fergal Hartley let his guard down a little following Sunday’s full-time whistle. The Ballygunner manager, who naturally keeps his cards close to his chest in his pre-match dealings with the fourth estate, didn’t hold back when heaping praise on a team which deservedly lifted the News & Star Cup for the fifth successive season.
“They’re incredible characters,” he said in the wake of the Gunners’ victory over Abbeyside, managed by his friend and former Deise defender, Peter Queally. “No matter what’s put to them, they always respond.” When asked if the Class of 2018 represented the club’s greatest ever team, Hartley immediately declared: “Without a doubt. The team I played in back on the 90s won three in a row and that was a good team but this team, I think, surpasses anything we ever had. It’s about character for me more than it is about hurling. They’re great hurlers but it’s all about character. What people don’t see is what these lads do on the training ground. Every night and I mean every night, they never let up. Every night this year, without exception, they’ve gone 100 per cent and that’s all you can ask for from a team, and I just can’t say enough good things about them.” 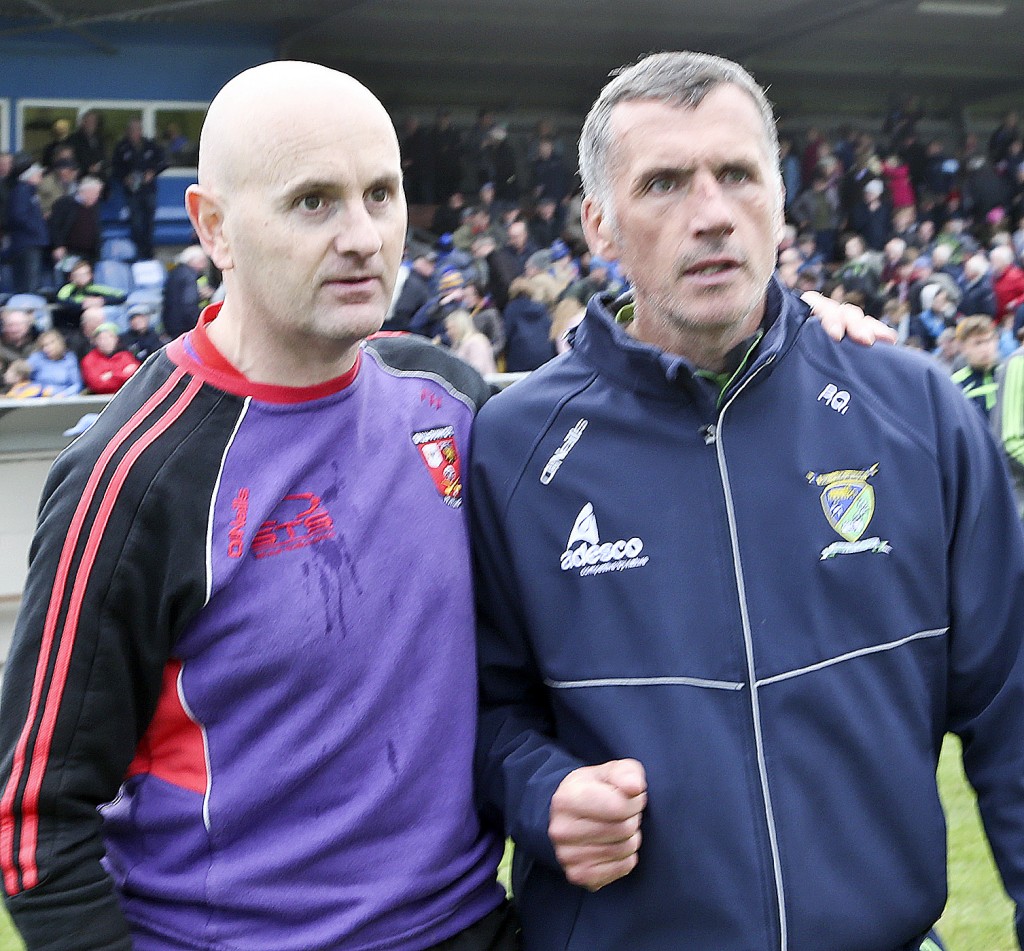 The champions weathered Abbeyside’s strong start and the even stronger wind to turn a two-point deficit into a three point advantage when rattling over six unanswered points, much to their manager’s satisfaction. “Our backs were to the wall,” according to Fergal Hartley. “Abbeyside were in the ascendancy and they had the momentum, but that’s what our boys do and I think they don’t always get the credit for that because sometimes when they’re winning games comfortably and it looks like it’s all about hurling, these boys dig it out when it needs to be done. And I’m so proud of them, so proud to be a Ballygunner man and I’m so proud of this team. One of our men, Pat McCarthy, he’s in hospital at the moment, he’s not well and we’re dedicating this win to him.”
Man of the match Pauric Mahony produced his best display yet in a Senior Final despite a -pre-game back issue which Fergal Hartley admitted could have left him sidelined.
“We didn’t let this out there but up until this morning, we didn’t know if Pauric was going to be able to play this game,” said the Gunners boss. “He’d an issue with his back and right up to this morning, even when we were at Brickey Rangers warming up, we didn’t know if Pauric was going to play…and to then go out and do what he did in a game he shouldn’t have played, it’s just a mark of the man that Pauric is. And if this game hadn’t been on today, he wouldn’t have trained for another two to three weeks. But he’s a phenomenal character and that’s what Pauric Mahony is all about.”
Despite Brian O’Sullivan’s goal, the Ballygunner manager never felt capable of relaxing until the explosion of joy and relief at full-time. “Look, when you’re playing a County Final, as we found out five years ago when we played Passage, you can’t relax – anything can happen. In fairness to Abbeyside, they kept going and going and going and the journey they’ve made this year under Peter Queally from where they were last year is phenomenal. Peter’s a good friend of mine and a phenomenal character and you can see that Abbeyside team reflecting what Peter is all about: work, attitude and honesty, and that’s what Peter Queally and Abbeyside are all about. They deserve great credit – I think the scoreline was very harsh on Abbeyside. We were flattered by the scoreline.”
And so Ballygunner will embark on another provincial campaign come October 28th, chasing what would be only a second Munster Club crown. “We’ll focus on the Munster Club now; it really hadn’t been in our heads at all, it couldn’t be,” said Fergal Hartley. “It’s a tough draw for us against Midleton but there’s no such thing as a handy game in Munster but hopefully we’ll drive on from here.”