Blues skipper Paul Keegan, reflecting on last Friday’s win in Dalymount Park, said he was delighted with the win as Dalymount Park is a hard place to try and get a result.
“Bohs have some fine young players and they scored an excellent goal by playing the ball out wide and then into the middle but we dominated after that because they created very little afterwards. We were solid and organised and our midfield players, Bastien, Stanley and Sander know their jobs inside out at this stage. 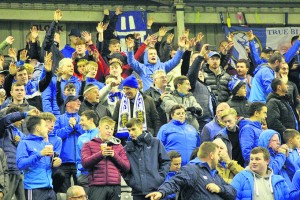 “It was good to see Sander popping up with another goal although Dylan (Barnett) is claiming the goal in there in the dressing room. Noel Hunt was been brilliant since he came to the club and his goal was the icing on the cake. We now play Dundalk who have been crowned champions and .congratulations to them. We will try and beat them because we want to secure third place and we are edging closer to European football next season and that would be a fantastic achievement for the club considering this is our first year back in the Premier League.”
First team coach Paul Cashin was equally as pleased with the outcome. “It was great to come here and be so positive. Training all week was very good and we brought that positivity into the game. There is no doubt that their goal kicked us into action and we went on to score some great goals. “One of them began at our corner flag and we moved the ball very well indeed. ‘Hunty’ took his goal well and he has brought so much to the dressing room as well as the pitch. Our midfield players bossed the game and that was wonderful. I know it’s an old cliche but all we are thinking about now is the Dundalk match. We are now fully focused on the game and we are now thinking about anything else. It’s one game at a time, pure and simple.”