Waterford FC will want to forget their two visits to Richmond Park this season when they look back at their campaign come the end of 2018.
Back in April they lost 1-0 at the Inchicore venue and they finished the game with just nine players.On Friday last at the same ground they turned in their worst display of the season and the defeat means they have now dropped to fourth in the table, two points behind a Shamrock Rovers side that easily defeated Bray Wanderers
Two points now separate the two clubs. Waterford’s destiny is still in their own hands as they have to play the Hoops at the Tallaght Stadium next month but that aid one would feel that the Blues will have to win their next two games, home to Bray Wanderers and Sligo Rovers, to keep the dream of European football alive for next season.
They did play reasonably well during the opening 45 minutes of this game but unfortunately they quite simply didn’t come out for the second period and they could have no complaints about the final outcome.
Waterford boss Alan Reynolds made four changes to the side that defeated Drogheda United in the FAI Senior Cup with Matt Connor, Dylan Barnett, Sander Puri and Courtney Duffus coming into the starting 11 in place of Niall Corbet, the suspended Garry Comerford, Paul Keegan and the injured Noel Hunt.
The Blues had much of the early possession, but a lapse of concentration from Bastien Héry on eight minutes saw Jake Keegan nearly take advantage when the Saints attacker spotted Matt Connor slightly off his line; however his ambitious effort from distance went wide of the left-hand post. 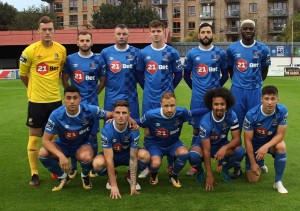 The Waterford FC team pictured prior to last Friday's kick-off.

Courtney Duffus should have done better with a chance that fell his way soon afterwards when he got on the end of a knockdown from Izzy Akinade, but the striker just couldn’t sort his feet out as Brendan Clarke gathered the ball.Bastien Héry opened the saints’ defence on 22 minutes when his magnificent pass sent Sander Puri clear down the left-side, but his low shot was saved by Brendan Clarke before the Estonian had a carbon copy of that chance superbly tipped around the posts moments later.
The hosts had a golden opportunity to take the lead just past the half hour mark when Achille Campion turned Blues defender Kenny Browne before playing the perfect pass for Jake Keegan, but the centre forward blazed wide from 12 yards.
Sander Puri could have put the Blues in front in a cagey affair on the stroke of half-time when he raced at the St. Pats defence before firing in a left-footed shot from just outside the penalty area. Goalkeeper Brendan Clarke parried the ball but Gavan Holohan just couldn’t react quickest as the ball was cleared.Ian Bermingham went agonisingly close to putting the home side in front six minutes into the second half when the full back found himself in an adventurous position 25 yards from goal, but his cracking left-footed shot whistled inches of the right-hand post with keeper Matthew Connor struggling.Connor came to his side’s rescue a minute seconds later when Darragh Markey split the Blues defence to set up Jake Keegan on the right-side of the area, but his low shot from 16 yards was superbly turned around the posts by the Blues netminder. 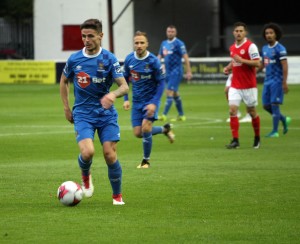 The home side broke the deadlock on 54 minutes when Markey took a pass from Ian Bermingham down the left channel.
His shot from deep inside the penalty area was saved by Connor, with Achille Campion on hand to hammer the loose ball into the net for his first goal for the Saints.
Courtney Duffus should have done better with a chance that came his way less than five minutes later when he got on the end of a lay-off from Izzy Akinade on the right side of the penalty area, but his angled effort was wide of the far post.Things got even better for the home side on 68 minutes when Ian Bermingham whipped in a brilliant corner kick from the right that picked out the head of the unchallenged Michael Leahy and he guided a fine header to the far corner of the net past a hapless Matthew Connor.
Duffus did have an opportunity to half the deficit six minutes later when the centre forward linked up Bastien Héry on the left-side of the penalty area, but his right footed effort from inside the penalty area flew inches over the crossbar.Leahy grabbed a third goal from another set piece on 83 minutes when he rose to meet a right-wing Ian Bermingham free kick; unmarked he planted a header into the back of the net from deep inside the penalty area.