Kilrossanty stun Stradbally to shake up the natural order
The satisfaction was palpable as the Kilrossanty team’s post-match team huddle broke up at Fraher Field on an airy Sunday evening.
For the fourth successive season, they’d just qualified for the Senior Football Championship Semi-Finals, having just taken the biggest scalp of all: reigning champions Stradbally, whom they’d just beaten in a knock-out scenario for the first time in 18 years. A semi-final with An Rinn awaits, meaning we’ll have a Finalist from outside the ‘Big Three’ of Stradbally, Ballinacourty and The Nire for the first time since Ardmore reached the Conway Cup decider in 2007. Manager Emmet Doherty, now in his fourth year with the Lemybrien-based club, has diligently toiled for a win like this, and was justly proud of his group as they strolled towards their dressing room. 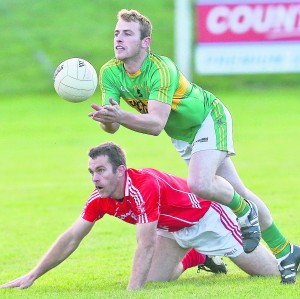 “In the last number of weeks since the (Quarter-Final) draw was made, the lads really knuckled down and really put it in on the training ground. It all came down to executing it on the day. It doesn’t always happen; we fell flat a couple of times but today, some of the scores we got were exceptional, top drawer stuff, maybe we got one or two lucky breaks but you need them as well. But credit to the lads, there was only a break of ball in it last year when we played Stradbally (in the semi-final which Kilrossanty lost by two points), sometimes it comes down to small margins and I felt all of those things went right for us tonight as opposed to last year, maybe, and we’re thrilled. We’re nearly 20 years waiting for a result like this, it’s my fourth year with the lads and it really was a case of it’s now or now rather than now or never: I know the quality that’s in those lads and it was just a matter of getting it out of them.”
Well, on the basis of this 2-13 to 0-12 victory (having led by 2-6 to 0-5 at half-time), in which Kilrossanty limited the champions to just eight points from play, there’s no disputing how much Doherty and his management team have got out of this group.
And they’ll head into their semi-final meeting with An Rinn (victors over Clashmore on Friday last) with justified confidence that they can advance to a Senior Final for the first time since 2000.
Kilrossanty’s work rate on Sunday night was exemplary: centre-back Patrick Whyte shone, as did former Tipperary midfielder Martin Dunne, while Conor Hayes superbly shadowed Stradbally’s Tommy Connors over the hour. Ahead of Hayes, full-forward Donie Fitzgerald roamed with intent, ending the night with five points, while Paul Whyte, who somehow almost played for the entire hour, ended the match with 1-3. There was no denying the quality of this Kilrossanty performance.

“You’ve got to work like that whenever you play the champions,” said their manager. “You can’t give them a second. We talked during the week about pressurising them on the ball because they have big target men in attack who can do damage if they get their hands on the ball. We had to ‘squash’ things a bit in the middle third to cut out that supply and the quality of the ball (into their forwards) wasn’t what they would have wanted it to be so that was probably the difference in the end. The lads worked so hard there, and I’m just delighted for them.”
Emmett Doherty added: “It’s our fourth year in a semi-final – we’re quarter-final experts at this stage! We know how hard it is to get over the line but we haven’t done it yet (at the semi-final stage). It’s going to be a huge task against An Rinn but the lads will knuckle down now and stick to it over the next few weeks.”