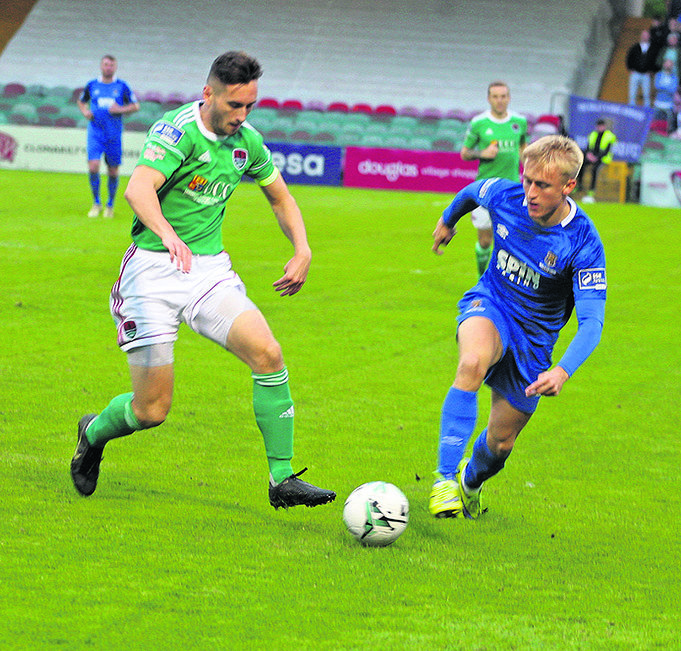 League of Ireland, Premier Division
Cork City 1
Waterford FC 2
Monday of last week proved to be one of the great nights for the Waterford FC players and supporters. With just eight minutes left on the clock the home side were leading one nil and a defeat at Turners Cross was looking odds on but the ‘Boys in Blue’ fought back and grabbed two excellent goals for their third victory of the season over Cork City.
Alan Reynolds made three changes from the team that had drawn with Derry City four days previously at the RSC. 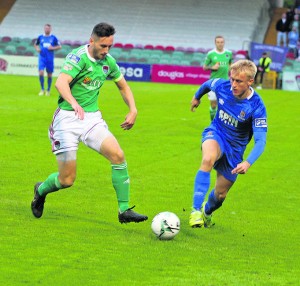 J.J Lunney replaced Zack Elbouzedi who was away in Under 21 international duty. Rory Feely came in for Maxim Kouogun in defence and Dean O’Halloran replaced Michael O’Connor up front. O’Connor scored the goal against Derry City and this decision surprised a lot of supporters. However he was to play a vital role in the winning goal after coming on for the second half and Kouogun, who replaced the injured John Kavanagh after just 19 minutes, headed the equaliser.
It just proved how important it is to have a strong panel. This win leap-frogged the Blues over Cork City on the league table. The Blues could have scored with their first attack on four minutes when Kevin Lynch sent over a cross to Shane Duggan but he dragged a right-footed shot wide of the far post from 12 yards. Dean O’Halloran went close for the Blues shortly afterwards but his shot was deflected wide.
Cork Under 19 goalkeeper Tadhg Ryan, who had replaced regular ‘keeper Mark McNulty, showed his class when he made a top save to deny Walter Figueira the lead goal for Waterford on 22 minutes.Cork City broke the deadlock three minutes later when Eoghan Stokes had a goal-bound shot blocked out for a corner and Daire O’Connor picked up the ball 20-yards and arrowed a shot to the net with the aid of the crossbar. Blues keeper Matt Connor made two superb saves in the space of a minute to keep his side in the game.
On 55 minutes Karl Sheppard sent in an excellent right-wing cross to Mark O’Sullivan, but his cracking header was tipped over before O’Sullivan got on the end of the resulting Shane Griffin corner that somehow the netminder managed to keep out. The hosts could have doubled their lead on 66 minutes when Sheppard took a pass from Eoghan Stokes and fired a ball across goal, under the arm of keeper Connor but Rory Feely cleared the ball out for a comer.
A mix up between Feely and Maxi Kouogun gifted Eoghan Stokes a chance soon afterwards, but he was denied by a fine Connor save.
The Blues went close on 73 minutes when Cory Galvin brought a great save out of Tadhg Ryan. Karl Sheppard was just inches wide with a free header after a Stokes delivery into the area two minutes later before Michael O’Connor brought a super save out of Ryan on 80 minutes when he let fly from 25-yards, but his effort was turned around the posts.
Waterford grabbed an all-important equalising goal two minutes later.
Shane Duggan crossed into the six-yard box where Maxi Kouogun powered a close-range header past Tadhg Ryan. Cork City manager Neale Fenn, who was taking charge of his new team for only the second time, was furious that the Waterford defender was given so much space to find the net.Fourth official Graham Kelly indicated three added minutes and it was clear the Blues weren’t just happy with a point as they pushed for a winning goal.With time counting down Michael O’Connor set up Georgie Poynton and he showed great vision to spot the unmarked Walter Figueira, who had the simplest of tasks to finish to an empty net.
Neale Fenn, who saw his team lose 4-2 to Sligo Rovers at the same venue the previous Friday admitted that he was “sick with the display of his defenders” but that did not worry the travelling supporters who were applauded by every single Waterford player at the St Anne’s end of the ground.