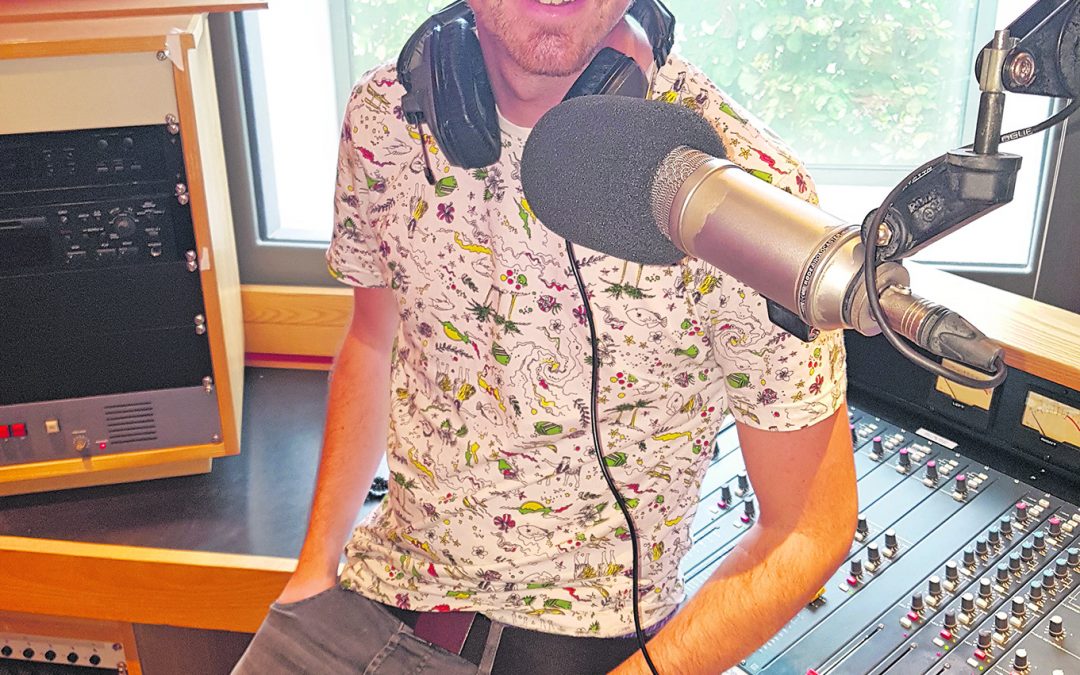 A new voice burst on to the airwaves here in Waterford and surrounding counties (including Carlow, Wexford, Kilkenny and South Tipperary) during the past few months and already he has become one of the most popular personalities on the regional radio station Beat 102-103.
It is clear Kevin Galvin has a love of many sports and that fact has helped him settle in quickly into his role as the main sports presenter-reporter with the station. Apart from broadcasting and writing about sport he has also played many different roles in various aspects of different disciplines as I found out when I spoke to him in Turners Cross last week as Waterford FC defeated his beloved Cork City. 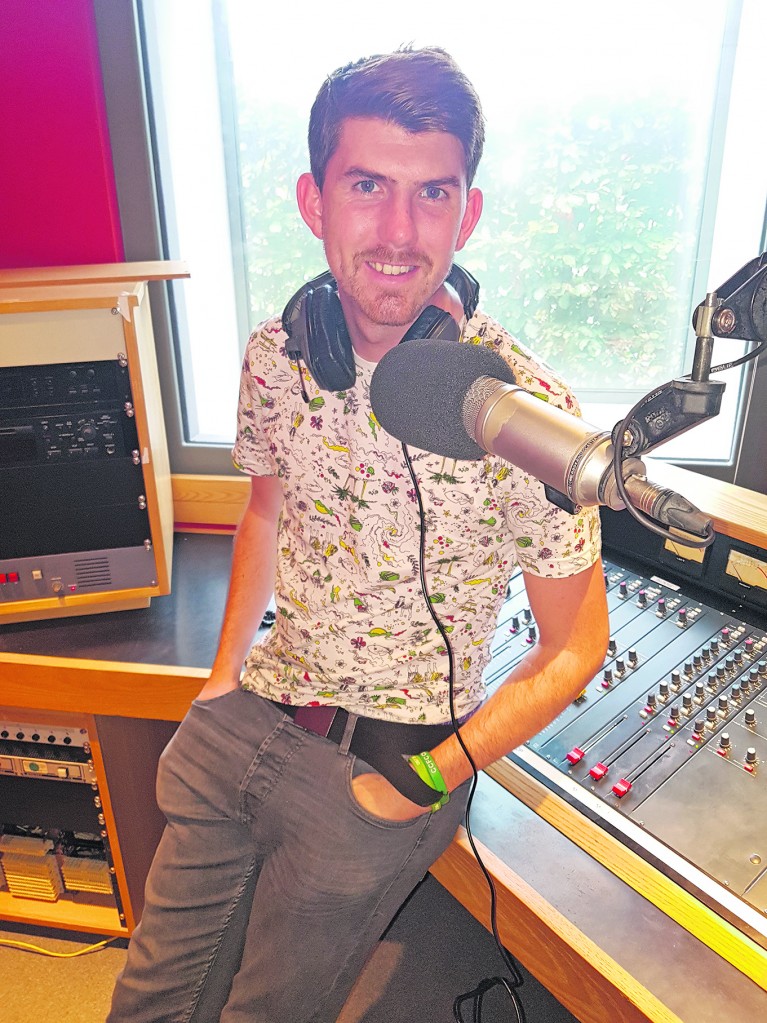 Kevin Galvin, relaxed and happy in his sports studio at Beat 102-103.

“I was born in December 93, the youngest of three brothers by six years. They are Stephen and Paul. Our parents are Mary and Dave. I went to secondary school in Christian Brothers College in Cork which is a rugby school (bit of a black sheep as my brothers went to Douglas Community)I went to my first Cork City match when I was just one month old. I started going regularly around the 97/98 season. My Dad Dave used co-edit the Cork City programme and won five ‘Programme of the Year’ titles in a row alongside Gerry Desmond. He is very proud of that fact and rightly so. He devoted a hell of a long time working alongside Gerry compiling and editing the programme.
“I remained in Cork for college to do Arts (European Studies) where I majored in French, and spent a year abroad in Marseille, watching a lot of football over there. That was certainly an added bonus. There is something different and indeed special about French football. The players in the main have special and unique talent and I was lucky enough to see some of the best players they have ever produced when I was there”, Kevin stated with his customary smile.I was keen to find out how the broke into journalism and he informed me how it all came about. “While I was in second year I ended up writing for the Evening Echo on local underage soccer and then went on to write on the League of Ireland and I currently still write two columns on cricket and soccer. I fell in love with the game of cricket in 2004 when I was watching The Ashes on Channel Four. I was totally bowled over (pardon the pun) with the game and I still am to this day. It is truly an incredible game and to be honest I would watch it all day long if I had the time. Rugby is another game which excites me and I am really looking forward to the World Cup in Japan. Like a lot of people I was surprised when Devin Toner was left out of the squad but I think Joe Schmidt has picked a strong panel of players and I think Ireland will reach the last four at least if we avoid injuries and all of the players play to their full potential in all of the matches.
“I spent four years on college radio, and in 2013 started ‘Rebel Radio’, an independent online radio commentary of Cork City games which we kept up to the week I started with Beat.
We covered almost 200 games in six countries in total, providing exclusive commentary on some of the club’s biggest games. It was a fantastic experience. It’s sad to see what Cork City are going through now and hopefully Neale Fenn will get it sorted next season.”
Kevin then outlined his administrative expertise with two different sporting bodies.
“I worked as a Communications Executive with Munster Rugby covering maternity, which is a brilliant place to work. It was hectic and chaotic at times but highly enjoyable.
I was also Munster Cricket’s first ever employee under Cricket Ireland, looking after the region as an administrator/PRO/commercial/team services/kitman, you name it I have done it!
I always wanted to do radio but at that time it never quite worked out, so decided to spend nine months travelling Asia to take some time out and decide what I wanted to do. I spent four months in India either side of the trip, and in the middle visited 10 other countries, including China for a bit. That nine months was amazing and it was an experience I will never forget.”When he returned Kevin decided to get stuck into seeking work on the airwaves as he explained.
“I applied for several radio jobs (including at WLR!) before I came back and was going to head into radio broadcasting in CSN before the Beat opportunity came up. I jumped at the opportunity and I have not looked back since. I love working in the Broadcast Centre and Waterford has become my second home. My colleagues are super to work with and I have made a lot of friends here. I really love it here in Waterford.“l love playing all kinds of sport; I have trained with Ireland in Aussie Rules and Olympic Handball, and at the moment I am playing in goal for Red Star. Adam Wyse asked to be play for the club. We play in Division 2A and we have played two games to date. Last week we defeated a strong Southend United team 2-1 and hopefully that will prove to be the first of many wins this season. The lads are a super bunch and apart from the matches the training sessions are enjoyable also.
“I will admit that I am a proud Corkonian and that’ll never change but I am loving the change to Waterford and the South-East is an absolutely fabulous place to live and right now I am making my way through every beach, week on week. Waterford is a beautiful county with so much to offer. The beaches and the mountains and of course the Greenway are fantastic.
Yes I am loving it here and hopefully I will be here for a long time to come,” concluded Kevin.