Waterford bounce back to stun Turners Cross crowd
Waterford FC put the disappointment of losing their opening game to Shamrock Rovers behind them on Friday last in stunning style, outplaying Cork City to record their first League win at Turners Cross since 2011. Blues manager Alan Reynolds was thrilled with the result but also with the manner of the victory. “The result was fantastic, but I thought the performance and display from everyone was outstanding,” he said. “We deserved it and it could have been more. We were really good and if we were more clinical in front of goal we could have scored more.” 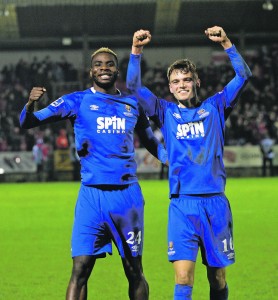 The starting Blues side team showed two changes from the match against the Hoops. JJ Lunney and Scott Twine came in for John Martin and Aaron Drinan in what was a changed starting formation. A 4-3-2-1 system worked a treat and the fact that Bastien Héry lined out in a more attacking position proved a masterstroke and he really tore the hosts apart. Shane Duggan and Lunney were also sublime in the middle of the park. Every single player rose to the occasion and the large travelling band of supporters went home extremely happy. This was one of the best displays by a Waterford team for many a long day.
Said Reynolds: “With the first (goal) when Bastien (Héry) squares the ball to Scott Twine, it’s a good save. It was a really good performance and I thought that we were defensively very good as well. We defended really well, which is something that we have to do down here.”I played Bastien further up the pitch tonight and he scored as well as having an assist so I can’t ask for anymore than that to be honest. Scott Twine coming in as his debut was very good. I didn’t really know him last week when he came in. He is a young lad and he is delighted with himself. He has settled in Waterford now.”
Commenting on the second goal, Alan Reynolds stated: “It was really good. Zack (Elbouzedi) is very quick. We just needed to get that striker to hold it up and bring the midfielders into play. Scott done well for it and the ball from Bastien was superb as was the finish. It was right in front of our fans as well which is special. The lads enjoyed it, but as we have spoken about in there, it’s about preparing for the next game. I thought Shane Duggan was excellent as well tonight and he is a good player. He is a great person to have in the dressing room and has settled in well with the boys.”
The manager continued: “After losing to the last kick of the game against Shamrock Rovers last week, it’s great to get a win here tonight and the lads will be hoping to build on that. It was a long week for us and we were disappointed after the defeat to Rovers. We are just a new team as well. There are so many new bodies and it’s going to take a bit of time. It’s going to take a bit of time for us to settle and gel.”