National Hurling League Division 1B
Dublin 1-26
Waterford 4-15
Brian Flannery at Parnell Park
In the fifth minute of injury time at Parnell Park, with Waterford trailing by two points, Stephen Bennett stood over a penalty with the opportunity to win the game. Unfortunately for the Ballysaggart man, Dublin goalkeeper Alan Nolan saved his low drive and with that referee Fergal Horgan blew the final whistle to signal victory for the hosts.
This was a rollicking good Division 1B league game that could have gone either way with Dublin marginally the better side over the 70-plus minutes. Dublin had the better of general play and the possession statistics but struggled to keep ahead of a Waterford team that hit the net four times.
Paraic Fanning’s side kept within touching distance of their hosts all through before spurning the late opportunity for victory.
Dublin, with the aid of the first half breeze, looked really sharp in the opening half with their half-back line of Chris Crummy, Sean Moran and Shane Barrett well on top, dictating the flow of the game.
In attack, Danny Sutcliffe, John Hetherton and Eamon Dillon were all showing excellent form with their ball winning ability causing difficulties. 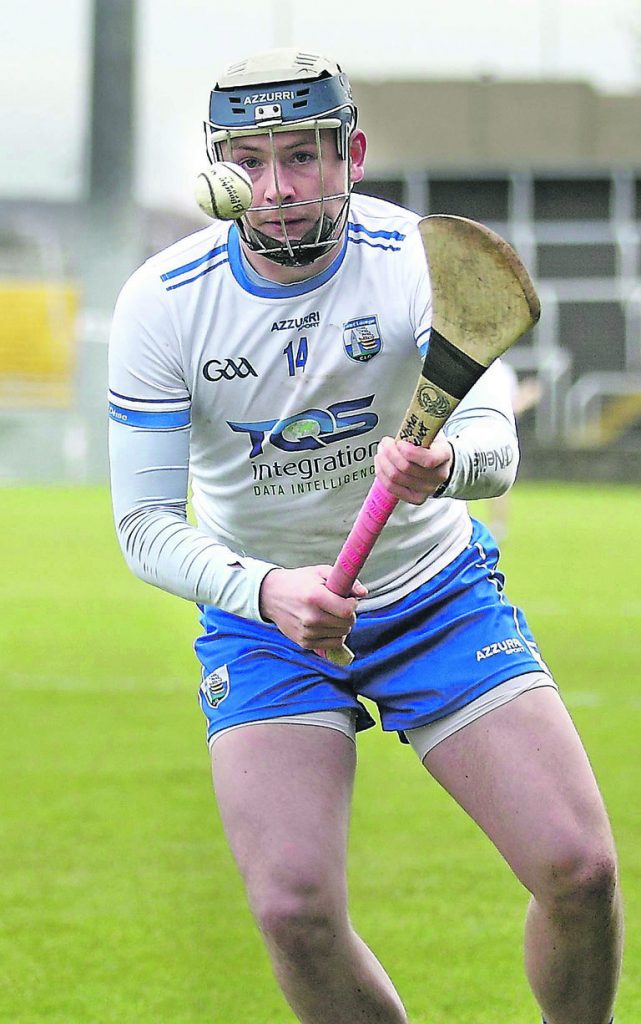 For the second consecutive week, Waterford’s lethal full-forward line of Thomas Ryan, Stephen Bennett and Shane Bennett all managed to goal. While goalkeeper Alan Nolan was the ‘late late hero’, he was very much the villain after just three minutes when allowing Stephen Bennett’s long-range free slip through his fingers for goal number one.
In the 18th minute, Thomas Ryan was sprung by a fabulous Jamie Barron line-ball, slipping his marker before shooting to the net. The first half goal scoring was completed after 31 minutes when Shane Bennett graciously accepted the assist from brother Stephen to shake the rigging once more and bring the game back to parity (3-2 to 0-11). Chris Crummy and Oisin O’Rourke hit late points to give Dublin a two-point interval advantage (0-14 to 3-3).
The home side had seven different scorers in the opening 35 minutes but their slender advantage looked slight given the quality of their play.Immediately on the turn-over it required a last gasp tackle from Austin Gleeson to deny Eamon Dillon what looked a certain goal at the expense of a 65, which Oisin O’Rorke then nailed; John Hetherton soon added another to increase Dublin’s lead to four points. Jamie Barron and Stephen Bennett (from another free) halved this advantage by the 41st minute. When Jamie Barron spilled possession inside the Waterford 45-metre line, Danny Sutcliffe pounced to send former All-Star Liam Rushe through on goal, who blasted into the roof of the net. Dublin were now in pole position leading by five points (1-16 to 3-5) after 43 minutes.
However Waterford responded superbly with Kevin Moran and Jamie Barron leading the charge. Fanning’s men hit six out of the next seven points to level the game 1-17 to 3-11 after 51 minutes. By then, the play was end to end with the intensity levels elevated to an even higher level.
New Dublin manager Mattie Kenny looked composed as points from Oisin O’Rorke (2) and Eamon Dillon restored a three-point lead for the homesters. Moments later, corner-back Paddy Smyth cleared a Stephen Bennett effort off the line but on 60 minutes Stephen Bennett was not to be denied, hitting his second and Waterford’s fourth goal with Shane returning the favour with the assist and levelling the game for an eighth time (1-20 to 4-11). Oisin O’Rorke hit all of Dublin’s last five points to put his side white flags clear deep into injury-time. But there was still time for further drama. A last gasp ‘Hail Mary’ ball towards the Dublin goal yielded a penalty when Tommy Ryan was dragged down by Darragh O’Connell with referee Fergal Horgan arriving on the scene with his arms outstretched. O’Connell’s strenuous protest yielded a straight red card before Alan Nolan redeemed his earlier error with the match winning save.Waterford will host Galway at Walsh Park on Sunday next (2pm) for a match which ought to draw a sizeable crowd to the Keane’s Road venue.