Mac Dara Mac Donncha Reports
When did Waterford footballers last score five goals in one match? When did they last score more goals than points in a clash? That’s a query for the historians but that’s what Benji Whelan’s charges achieved in Innovate Wexford Park on Sunday last.
The win, thoroughly deserved by the way, lifts them off the foot of the table and should give them a timely fillip for their remaining three matches, even if promotion is out of the equation.
In some ways this encounter was similar to their championship meeting last June. Each and every time that Waterford ran at the Wexford defence, they caused havoc, and each of the five goals was well created and finished.
Wexford’s appalling inaccuracy, shooting some 14 wides in all, didn’t help their cause but they can have no complaints here.
A small crowd(272) saw a mediocre opening half of football, with both sides making a litany of basic handling errors. Jason Curry got Waterford off the mark, kicking a short 45 to Tommy Prendergast, taking the pass back and neatly splitting the uprights. Jonathan Bealin equalised for the home side two minutes later and they took the lead through a speculative Eoghan Nolan effort, which hopped over the bar from 13 metres out, not what one would expect in February! 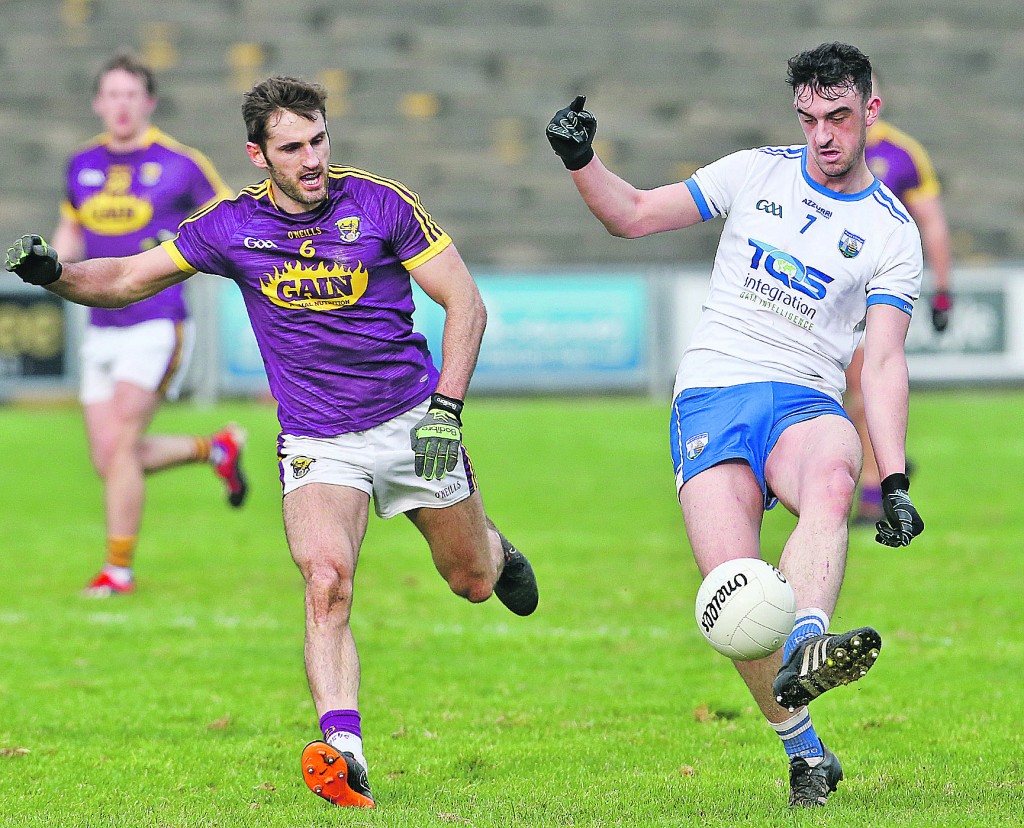 Wexford had much of the possession in the first quarter and Jonathan Bealin extended their lead with a ninth minute point. We then had to wait eleven minutes before the next score, a Jason Gleeson minor for the visitors and although they hadn’t nearly as much possession, they were very much in touch. Both sides pulled back most of their players when defending and Wexford showed patience in one such instance, going across the field over and back before John Tubritt finally doubled their lead in the 26th minute.
A minute later, The Déise breached the defence for the first time, when good work by Brian Looby, Dylan Guiry and Tommy Prendergast freed up Feargal Ó Cuirrin and the An Rinn man calmly finished low to the net. Eoghan Nolan equalised in the 32nd minute but that goal gave Waterford a new lease of life. Their second major came in the 37th minute.
This time, Feargal was the provider, slipping the ball to Dylan Guiry who showed great composure in slotting the ball past Matt Doyle. They were back in front but suffered a blow then, when Ray Ó Ceallaigh received a straight red card from referee John Hickey, for an off-the ball incident. Jonathan Bealin’s injury-time free narrowed the gap at half-time to just two points: Waterford 2-2, Wexford 0-6.As one would expect, Wexford, with the extra man, threw everything at the Waterford citadel on the resumption but the Déise defence was disciplined and well marshalled and for all their early possession, all Wexford could add was a Jonathan Bealin point, from a mark, and even this may have been slightly controversial as he seemed to take a solo and a hop before kicking the ball, which isn’t allowable in such situations.
From a rare Waterford attack at this stage, Feargal Ó Cuirrin’s low shot was deflected out for a 45 which Shane Aherne excellently slotted between the posts. The hosts then had their best spell of the match, scoring three quick points, per Glen Malone, Conor Carty and Eoghan Nolan and they were back in front by the 52nd minute. Waterford’s best goal of the five came within sixty seconds. Wexford’s constant attacks left them open to breaks and when Sean O’Donovan released Feargal Ó Cuirrin, he used his lightning pace to eat up the ground before unleashing a perfect and powerful low shot to the net. It was a superb goal and it couldn’t have come at a better time.
Barry O’Connor had been introduced by the Wexford management and his 54th minute point narrowed the gap to the minimum, but on an unlikely scoreline of 3-3 to 0-11. Ten scoreless minutes ensued, including some atrocious wides by the home side, but to give the Waterford players due credit, they hassled and harried all the way. They then broke again in the 64th minute, which saw Shane Aherne inside the last line of defence. After losing control initially, he chipped the ball over Matt Doyle with his left foot. Was it an outrageous fluke or a flash of genius? Maybe only Shane himself can answer that!
Barry O’Connor added his second point for the shell-shocked home side but Waterford weren’t going to pass up on this opportunity and a lovely cross-field pass from Shane Aherne found Tommy Prendergast who calmly dissected the uprights for just their fourth point of the afternoon. Better still was to follow in the 67th minute when they attacked with vigour once again and Jack Mullaney’s pass was palmed to the net by Conor Murray. Even though the referee inexplicably added a full seven minutes of injury-time, Wexford pressed but never looked like scoring a goal and the final whistle was greeted by relief rather than ecstasy by the Deise camp.
Finally, Waterford have league points and they were honestly earned here. The kick out strategy, which is not dissimilar to the Kilrossanty one where all the players line up in a straight line up the middle of the defence before players break away to the sides, worked quite well and they gained possession from most of Aaron Beresford’s restarts.
He made two fine saves, helped out by a solid defensive unit. Tommy Prendergast worked like a beaver at midfield as ever and up front, Feargal Ó Cuirrín, Conor Murray and Shane Aherne (second half) stood out but each and every player involved did his bit here, with an admirable work rate featuring from start to finish.