League of Ireland, Premier Division
Cork City 0 Waterford FC 2
Waterford FC put the disappointment of losing to Shamrock Rovers behind them in stunning fashion when they defeated Cork City by two goals to nil at Turners Cross on Friday night last. Zack Elbouzedi fired over the bar from a corner inside two minutes while Kevin Lynch sent in a left-wing delivery in the fifth minute to central defender Damien Delaney, but his header was saved by Cork keeper Mark McNulty.Conor McCarthy gifted the Blues a chance to take the lead on seven minutes when he played the ball straight into the path of Izzy Akinade, but the ball took a bobble as he fired goalwards. 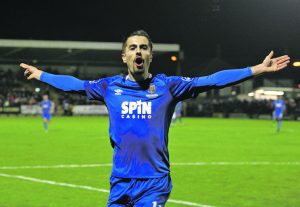 Zack Elbouzedi celebrates as he scores the Blues second goal against Cork City.

There was a break in play as both captains Damien Delaney and Alan Bennett fixed the net damaged by a Kenny Browne clearance.
Scott Twine had a great chance to open the scoring for the Blues on ten minutes but his shot was saved on the line by McNulty.
Héry then tried his luck from distance, but his effort was high over McNulty’s crossbar.The Blues continued to dominate the first half and on 36 minutes Kevin Lynch sent in a brilliant right-wing corner kick but the ball bypassed both Delaney and Browne.
Cork City nearly made their visitors pay for not scoring on 39 minutes when Daire O’Connor clipped the ball into the penalty area for former Blues player Kevin O’Connor, but his right-footed shot was saved by the feet of the netminder.
The Blues struck for the goal their first half dominance deserved when, in the third added minute of stoppage time, JJ Lunney sprayed the ball out to Kevin Lynch, who slipped it back inside for Bastien Héry and after some brilliant control, he beat McNulty with a fine right-footed finish from the edge of the penalty area.City had a penalty appeal waved away by referee Tomney on 64 minutes when Sheppard’s ball hit the hand of JJ Lunney, but it wasn’t intentional.Two minutes later O’Connor nipped the ball off Lunney and played Graham Cummins clear down the right-channel, but his cross was way too high for Sheppard.
The Blues should have doubled their lead on 69 minutes when Bastien Héry picked out Shane Duggan, who slipped the ball to Scott Twine, but his effort went inches wide of the target.Rory Feely came to the Blues rescue with a brilliant goal-line clearance when he hacked the ball off the line after Karl Sheppard’s shot beat keeper Matt Connor.Waterford grabbed the insurance goal in the second of five added minutes when Scott Twine held up the ball for Shane Duggan, who fed Bastien Hery and he found Zack Elbouzedi and the winger powered an unstoppable shot past a helpless Mark McNulty.