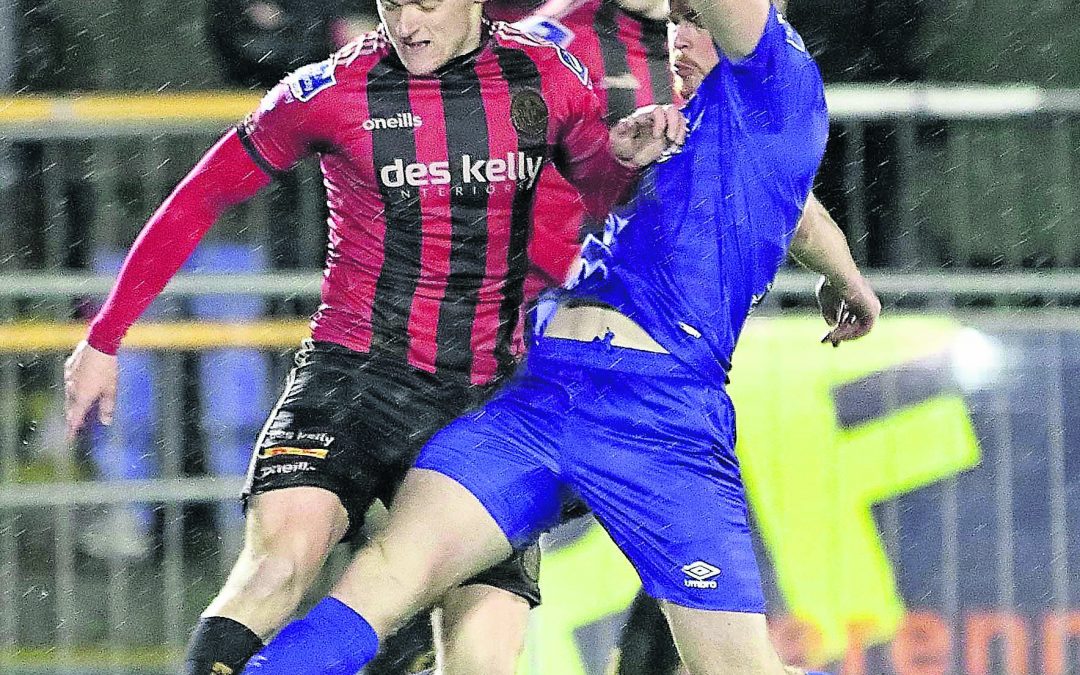 League of Ireland Premier Division
Waterford 0 Bohemians 2
Jordan Norris Reports
A flurry at the end of the first half saw Bohemians grab the points at a wet and windy RSC.
A crowd of over 2,400 came out in droves to support the Blues in their first home clash of the campaign – but the conditions were not so welcoming, as in truth, it was a difficult night for football. Alan Reynolds’ side looked to build on their impressive opening day win at St Pat’s and started the game brightly, but it was the visitors who created the most significant of chances.
Tyreke Wilson was impressive down the left during early exchanges, as was Robbie McCourt. The first real chance of the game came as Keith Ward launched a stinging effort, but the safe hands of Brian Murphy palmed it behind the post. Waterford strung together some nice passes on the counter, looking dangerous when getting into forward areas, however failing to really test Stephen McGuinness between the sticks. Ward was growing into the tie for Bohs, and he struck a fierce effort out of his feet which looked a certain goal until it clipped the inside of the post, Murphy scrambling to be first to the loose ball on the line. 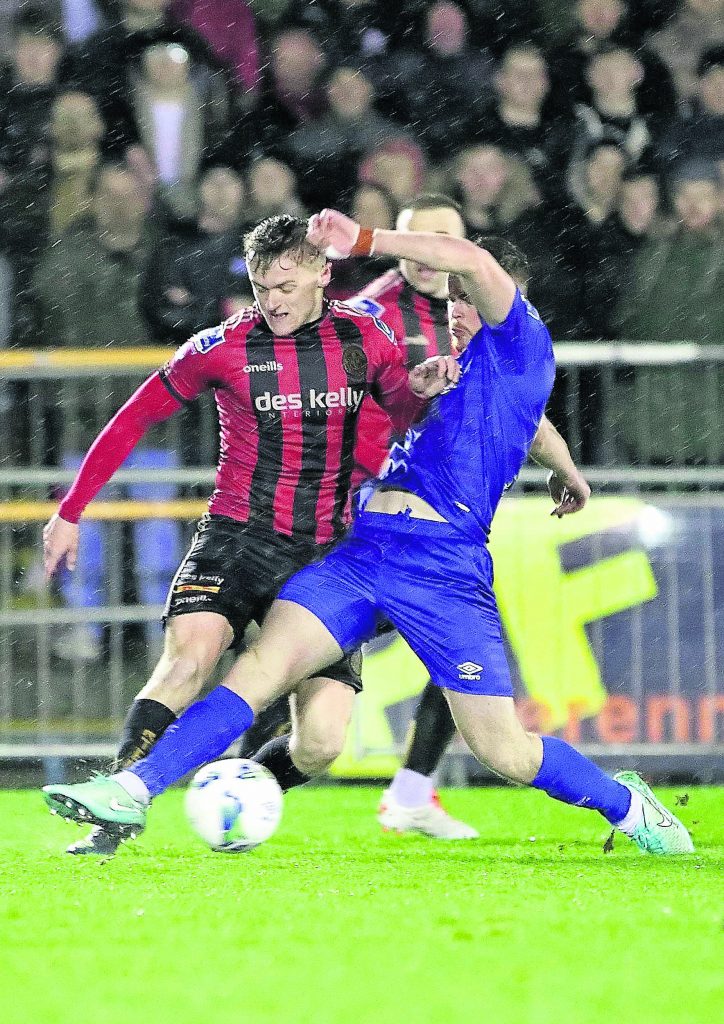 Waterford FC’s Scott Allardice gets a great tackle in on Bohemians JJ Lunney.

Matt Smith then tested McGuinness from range, before McCourt whipped in another great ball to no avail, but just ten minutes later the Blues were dealt a sucker punch from which they never really recovered. Michael Barker played in Kris Twardek, who displayed great skill to beat Wilson down the line, his sumptuous cross into the six yard box left Sam Bone isolated and with attackers behind him he knew a touch was vital, but unfortunately for him this touch would end up in his own net. Scoring right before the interval, just as the home side were growing into the game, Bohs began to blow the wind out of the Blues sails.
The away side were then awarded a spot kick just moments later as Scott Allardice was adjudged to have bundled over the lively as ever Danny Mandroiu in the area, referee Paul McLaughlin showing little hesitancy in pointing to the spot. The Ireland U-21 international picked himself up and fired an excellent penalty to the top right, sending Murphy the wrong way with Boh’s essentially home and dry in all but the literal sense when heading in for half time.
The second half was a much scrappier affair, Waterford having the elements in their favour but being stifled by a well marshalled defence, as it was no real night to get the ball down and try to play football. Bohs went closest to adding to the scoreboard, as Glen McAuley got in behind but was denied by a terrific recovering block from the outstanding Akin Odimayo who was solid at the back for the home side. Two late efforts from Bone threatened to see Waterford grab a consolation but in truth it turned out a comfortable victory for the Gypsies, as Keith Long’s side saw out the game for large periods of the second half, Waterford not able to use the gale force winds to their advantage.
It was far from a poor performance, but two goals in three minutes at any level is a setback difficult to mount a recovery from. The task of facing Shamrock Rovers, who struck six past Cork, is another that will prove daunting – but it’s still early days, and there is definitely potential for success this season.