Loanees In Limelight Once Again

Jordan Norris Reports
While Waterford went down 2-0 to Bohemians under Friday night lights – a text of thank you very much was surely headed the way of John O’Shea again, as it was the Reading duo of Andre Burley and Akin Odimayo who shone brightest on a night where it was crazy to be outside the door, let alone play football.
There’s no denying that the weather conditions didn’t help either side, but it was Keith Long’s side who had the better measure of it and they capitalised during a strong spell to shoot two daggers into Deise hearts from which they would never recover. 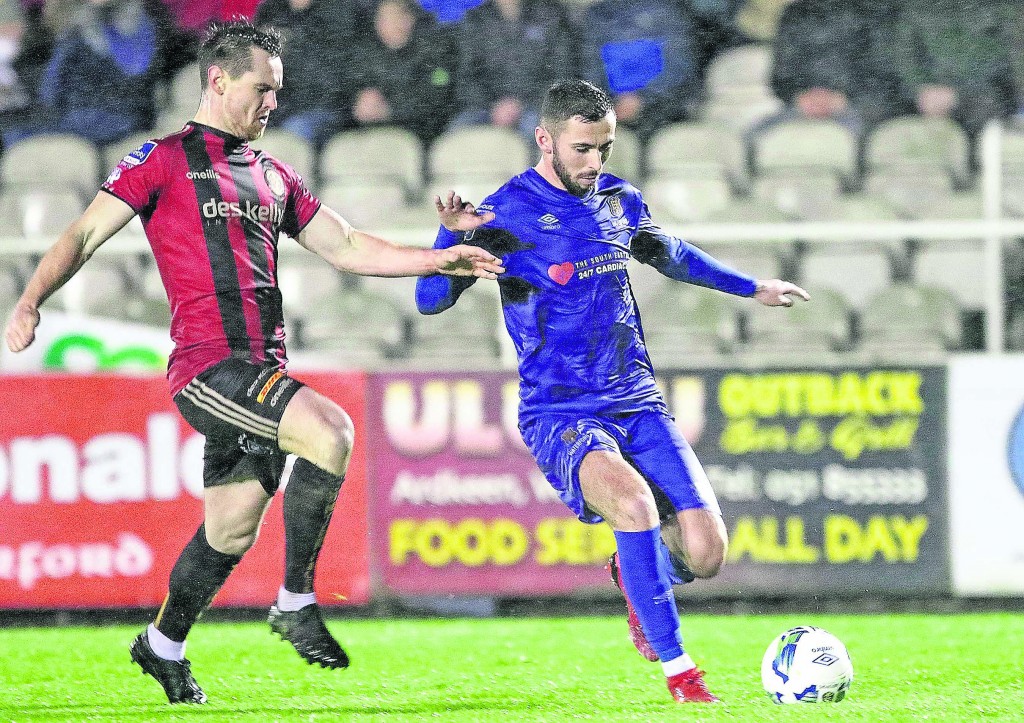 Waterford FC’s Robbie McCourt about to cross in the first half.

With a high line at the back, the ball playing abilities of the loan duo Burley and Odimayo were crucial in breaking down the blocks in which the visitors defended, a well calculated ball up the line from Burley set the impressive Tyreke Wilson racing up the line in one of Waterford’s brightest exchanges, and each time the Gypsies attempted the counter, Odimayo mopped up impressively with a defensive acumen far beyond his years.
The duo displayed an ability to carry the ball forward into midfield, remaining positive minded on the ball, and never panicking in possession – which helped to assure the side at times in conditions which threatened to give us hoofball and desperate play.
The pair were absolutely excellent in their debuts at Richmond Park when they kept a clean sheet in the win at St Patrick’s Athletic, and there was little either could do with the goals conceded on the night here – the first a wicked ball from Kris Twardek that saw Sam Bone head in his own net under pressure, the second a harsh call on Scott Allardice for a foul on Danny Mandroiu, who duely converted from the spot.
Odimayo excelled in the second period in keeping the scoreline to damaged limitation, his second half recovery challenge on Glen McAuley as he bore down on Brian Murphy’s goal was as good as any you’ll see this season. There’s no denying it was a disappointing result, but these two have given supporters something to be excited about despite only playing 180 minutes in the Blues shirt.
It is a worthwhile deal for all parties involved, as at the beginning of their twenties, both Burley and Odimayo will now seek first team experience as they attempt to break into the side at Reading after the end of their loan spells. Their acquisition was the latest in a very shrewd set by Alan Reynolds in the close season, and so far, it looks as if the rest of the league may be tearing their hair out that they didn’t tap them up first.The English duo will only improve with each passing game, and it’s a long long season ahead.