All-Ireland Intermediate Camogie Club Final ( copy over page 2 and 3 please)
Gailltír 1-13
Saint Rynagh’s 0-13
Úna Jackman smashed a match-winning goal in the fourth minute of injury time to snatch victory for Gailltír in the AIB All-Ireland Intermediate Club Camogie Final at Croke Park on Sunday. 12 months on from a heart breaking one-point loss to Clonduff on a freezing cold day at Croke Park, Orla Murphy’s side made no mistake this time around as they fought back from two points down to win in the end through the only goal of the game.
3,705 made their way to way to G.A.A. Headquarters for the biggest day in the Camogie Club Calendar.
Most possibly did so to see Sarsfields and Slaughtneil in the senior decider but anyone that didn’t arrive early missed the better of the two games.Playing with the breeze at their backs in the first half, Gailltir were the happier of the two sides at the break as they turned around with a 0-7 to 0-4 advantage. St Rynagh’s came out on fire for the second half and hit six points in the opening 12 minutes with only one reply from Gailltir. 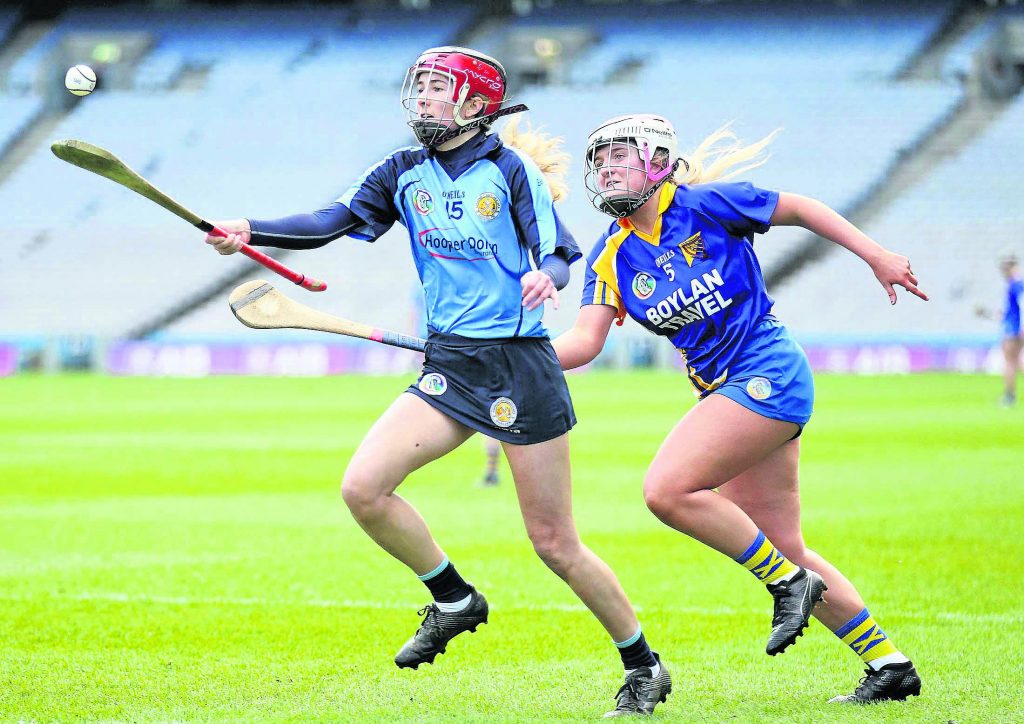 However, with only four minutes left to play it looked like the match was heading for a draw with the teams locked on 12 points apiece. Then Siobhan Flannery put over a superb free to give St Rynagh’s a one-point lead with just two minutes to go. Deep in injury time Gailltír hit the vital scores to ensure victory as the heartbreak of last year’s defeat was finally banished.
Gailltir were first to score in this game, which was played in sunny but windy conditions at G.A.A. Headquarters, when Ciara O’Sullivan shot over the head of Ellen Gilligan in the Saint Rynagh’s goal at the Hill 16 end of the ground.
The Offaly champions were soon on level terms when their brilliant teenage star Kate Kenny shot over at the other end three minutes later. Ciara O’Connell picked up an early yellow card for the Midlanders and from the resulting free Annie Fitzgerald, who top scored for the Sky Blues over the course of the championship, made no mistake and when her cousin Aoife Fitzgerald pointed it was starting to look good for Gailltír. The Waterford Champions have a nice blend of youth and experience in their set up and it was the experienced Áine Lyng, who captained this year’s side, who shot over the next score for the Sky Blues and then followed up with another to put her side 0-5 to 0-1 in front with 18 minutes played.
The Offaly side came more into the game after this and made it a three-point game when Siobhan Flannery put over her first of the game on 19 minutes. Aoife Fitzgerald and Anne Corcoran followed up with scores for the side in Sky Blue with four minutes of the half remaining, but St Rynagh’s finished the opening half strongly with points from Siobhan Flannery and centre back Linda Sullivan to send the sides to the dressing rooms with Gailltir holding a much deserved 0-7 to 0-4 lead.
The second half started as the first half did with an early score from Ciara O’Sullivan to stretch her side’s lead to four, but St Rynagh’s came roaring back into the game.
Siobhan Flannery reduced the deficit with a point from a free and when Kate Kenny put over a brace of scores and Flannery added another, the sides were level at eight points each after 40 minutes. Siobhan Flannery punished Gailltír for any frees given away and on 42 minutes she pointed again to give her side the lead for the first time.
Gailltir scored for the first time in 13 minutes when Annie Fitzgerald once more split the posts and it was followed up with scores from Shauna Fitzgerald and other from Annie Fitzgerald to give Gailltír a 0-11 to 0-10 lead with 52 minutes played. Annie Fitzgerald put over her third score of the game but the Offaly side hit back with a quick-fire double from Gráinne Dolan and Siobhan Flannery to take the lead once more with seven minutes remaining.
Annie Fitzgerald levelled matters but within sixty seconds Siobhán Flannery shot her seventh point and what seemed a worthy winner, with a free from the middle of the field with two minutes of regulation time remaining. But Gailltir were not going to throw in the towel without a fight. There was no way that they were going to make that journey down the M7 without the Agnes O’Farrelly cup.Deep in added time Gailltir won a free under the Cusack Stand.
No side would want anyone other than seven-time All-Ireland Púc Fada champion Trish Jackman to stand over it. Her effort, driven with precision, landed in the danger zone and was won by Shauna Fitzgerald. Surrounded by a number of Royal Blue shirts Fitzgerald managed to pick out Úna Jackman who let fly into the roof of the Saint Rynagh’s net to give Gailltír a two point-lead.
Before the roars of the Gailltír players had died down they won another free which Trish Jackman once more stood over and this time her effort did not fall short as it sailed over the crossbar at the Canal End of Croke Park to secure the win for Gailltír who became only the second Waterford club side to win at Croke Park on All-Ireland Final Day.