Brilliant Away Win for Waterford Youths

AI Inter League Youth Cup
Cork League 0 Waterford League 1
The Waterford District League defeated the Cork League with a goal inside of three minutes in the Youth Inter League Cup on Saturday afternoon at Moneygourney.Waterford opened the scoring with their first chance when John Kavanagh intercepted a loose clearance and squared the ball to Stephen Imiren, who fired it across the face of goal to give his side a 1-0 lead.Cork responded well to this set back and had a great chance to equalise not long after. A free from Killian O’Brien dropped seemingly inch perfect into the box, but referee Chris Sheehan signalled for a free out.
Stephen Imiren almost gave Waterford a two goal advantage when he got on the end of the visitor’s first corner of the game but the towering Thomas O’Connell cleared.
Cork created another chance when Eoin Ryan broke out of defence but his pass to Dylan Flaherty was just too short and the ball went out for a goal kick.
Cork’s best chance of the first half came on the stroke of halftime. 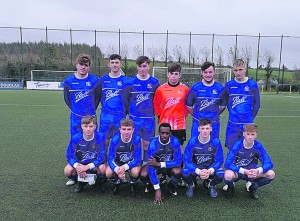 The Waterford Youth Inter League team that defeated the Cork League in Moneygourney on Saturday last.

O’Flaherty squared the ball to Eoin Ryan who, with the keeper at his mercy, was denied by the tracking back Stephen Imiren who cleared the ball for a throw- in.
Waterford had a good chance to extend their lead early in the second half. Billy O’Connor got on the end of a John Kavanagh pass and fired at goal but Cork keeper Callum Finnegan gathered O’Connor’s tame effort.Waterford keeper Kyle Gahan made a superb save when he tipped a stinging volley from Adam Murphy around the post and from the resulting corner Stephen Imiren fired in another shot, but it was easily saved by Finnegan. Cork almost grabbed an equaliser in the 89th minute but Nathan O’Connell’s shot was inches off target as the Waterford defence held firm for a super win. Next up for Anthony Brown and his charges is a home game in Ozier Park on Sunday, November 25th against the Clare League and victory in that game would see them reach the knockout stages.