Ballygunner manager Fergal Hartley went ‘West Wing’ following his post-match interview on TG4, opting for a ‘walk and talk’ with the print media, en route to the Walsh Park tunnel while digesting an extraordinary afternoon’s hurling. “A win like that has nothing to do with systems, it has nothing to do with tactics,” he began, as the rain fell at an unfriendly level for journalists brandishing dictaphones. “It’s down to the person behind the hurler and about character. There’s 40 minutes in every game for systems and tactics. The first 10 minutes are always manic. Tactics work for 40 minutes and then, particularly in games like this, Munster hurling, every game we play – it’s the last 10 minutes, no rules.” 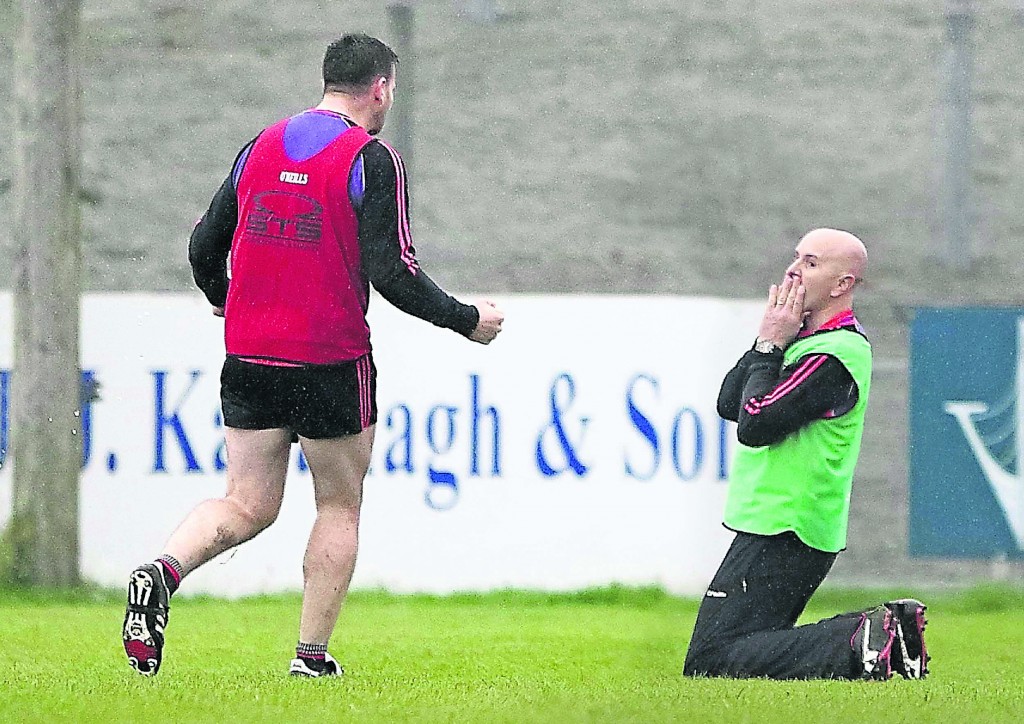 Ballygunner manager Fergal Hartley sinks to the ground as Wayne Hutchinson comes rushes to congratulate him at the final whistle of an extraordinary contest.

Hartley continued: “Last year against Sixmilebridge, against Thurles Sarsfields, even against Na Piarsaigh, those games were won and lost in the last 10 minutes. That’s the way it goes. At that stage there are no tactics, there is no game plan. It’s just man for man and may the best man win; win your battle. It’s as simple as that: every ball you win can be a match winner at that stage. That’s what it’s about – just win your ball, simple as. No game plan.” Philip Mahony’s last gasp goal, the most memorable one of its kind scored at this ground since Sean Hogan broke the Gunners hearts in the 2013 County Final, was, by his manager’s admission, pure ‘Hail Mary’ stuff. “Yeah. It was and we were lucky,” he stated. “We got the rub of the green and Ballyea will probably feel very hard done by on that basis. It was flick of a coin stuff. I know it’s a cliché but no-one should have lost that. My heart goes out to Ballyea – a huge team, a huge club and the legendary Tony Kelly but we’re just happy to come out the right side of it.”
Familiar opponents await in the November 18th Final, an outfit Ballygunner have yet to beat competitively.
“I hope these last two matches will stand to us,” said Fergal Hartley. “They’ve been two huge games under huge pressure an we know the pressures we’ll be under against Na Piarsaigh. I haven’t even started thinking about it! We’ll sit down in the next couple of days and plan and see what we can do. We’re under no illusion about the scale of the challenge. It’s generally accepted that they’re the best club team in the country. What we can do – I don’t know at the moment is the honest answer but the next couple of days will probably tell a lot in that regard.”