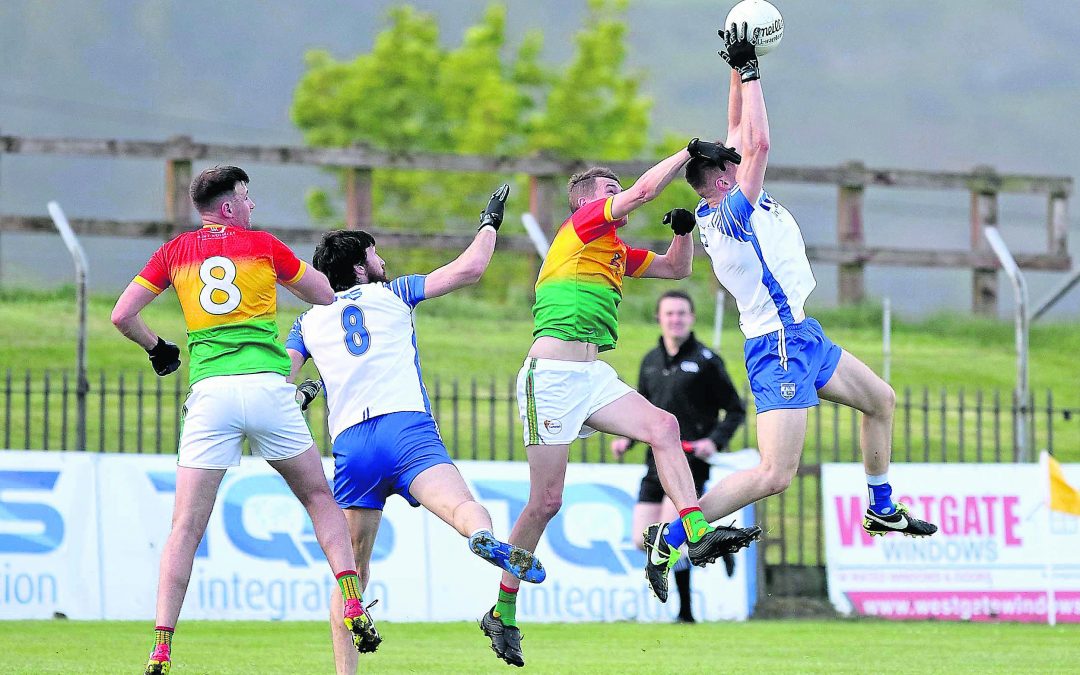 A clinical performance from Carlow left a wilting Waterford for dust, as the visitors romped to victory at Fraher Field on Saturday night.

The Déise made a bright start in the first game under the instructions of new manager Shane Ronayne, but as the game grew old – Carlow exerted their influence, with goals from Jamie Clarke, Colm Hulton and a stunning effort from Conor Crowley proving pivotal.

Waterford started brightly with Stephen Curry pointing from close range after a Jason Curry free had come off the upright. Darragh Corcoran was found in space in the fourth minute and called the mark, popping over the requisite dead ball to give the home side a two-point cushion.

Déise captain Conor Murray shot wide after a great run up field from Darach O’Cathasaigh – before the Barrowsiders got on the scoreboard from a free. Ross Dunphy made a driving run at the Déise defence, and 2018 All-Star nominee Paul Broderick did the rest.

Darragh Foley levelled the scores with an eighth-minute free, before Conor Murray showed a glimpse of his brilliant best – the Rathgormack man receiving the ball on the right hand sideline and slicing the ball between the posts with the outside of his boot. 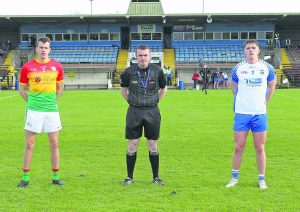 The narrow lead did not last for long however as Conor Crowley offloaded to Broderick who kicked a great score before a Jason Curry effort dropped just short. Crowley then got his first of a stellar individual performance as he turned Brian Looby and found the radar. Debutant Sean Boyce was in the wars for Waterford, making a brilliant block on a Chris Blake attempt.

Eoghan Ruth could not find the required distance for his effort soon after, before Brickey Rangers man Mark Cummins slalomed through a few bodies to make it four points apiece.

Darragh O’Brien finished off a team move for Niall Carew’s side as Carlow led 5-4 at the first water break.

A Jason Curry free levelled the scores once more before a close-range point from Paul Broderick and a Darragh Foley free pushed Carlow ahead.

Carlow had a goal disallowed when Paul Broderick picked up a loose clearance from goalkeeper Paudie Hunt, he slipped the ball into Chris Blake who in turn off-loaded to Conor Crowley who tapped in to an empty net – but fortunately for Waterford, the corner-forward was adjudged to have been in the small square before the final pass was made.

A beautiful individual score by Jamie Clarke and a super strike from distance by John Murphy somewhat eased the grievance felt by Carlow – who deservedly led by 0-09 to 0-05 at the sound of the half time whistle. 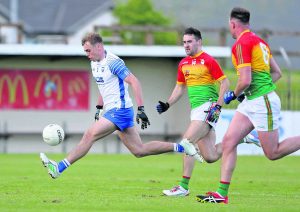 Waterford full back Brian Looby on the move.

Carlow further pushed the boat out at the beginning of the second period courtesy of two frees from the boot of Darragh Foley. These came either side of a missed attempt on goal from Conor Murray when he shot first time on the turn, but it went agonisingly wide for the hosts.

Darragh Corcoran then kicked the Déise’s first point in half an hour when he curled an effort over the bar. The home challenge was well and truly killed on the 46-minute mark, Jamie Clarke firing to the far left hand corner of the net for the game’s opening goal.

Ross Dunphy then tacked on another point in a fine individual showing, before Conor Crowley was played in on goal by Sean Gannon, but Paudie Hunt was alert to deny him with a point-blank save.

Jason Curry did his utmost to arrest the Déise slump with another free, before Darragh O’Brien laid off to Conor Lawlor and the corner-back grabbed a good score.

1-13 to 0-07 was the score going into the final quarter, and it was here that the Barrowsiders left the Déise in their wake.

A Curry free was cancelled out by another Ross Dunphy effort, before substitute Colm Hulton called the mark and slotted over. 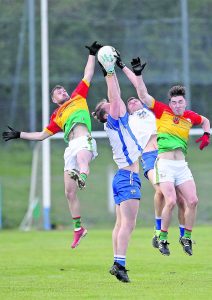 Waterford’s Caoimhín Maguire makes a great catch during the second half against Carlow.

Rathvilly clubman Conor Doyle then squared for Hulton with his first touch, and he obliged to bury the ball to the roof of the Déise net. Paul Broderick was found in space to knock over another score before Hunt did the required from a ‘45.

A Brian Lynch free put the Déise into double figures at least, but Conor Crowley then nearly took the net off with a rifle to the top left corner with the final kick of the game – and the gulf in quality was never more apparent come the sound of referee John Ryan’s full-time whistle.

Next up for Waterford is a trip to Wexford, and they will need to improve if they are to pick up any points this campaign.