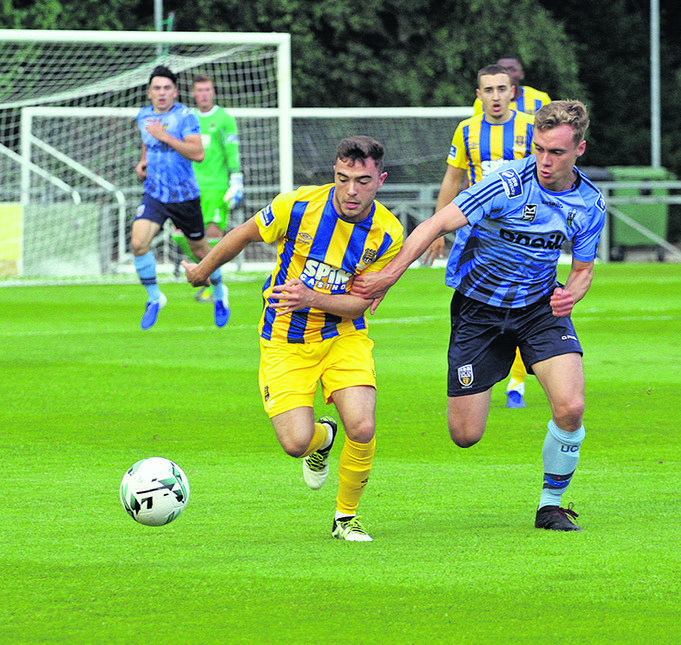 Premier League
UCD 1
Waterford FC 2
Following a run of poor results Waterford FC made the journey to the Belfield Bowl on Friday night hoping to get back on track once again. A nervous Blues team took to the field because this venue has proved troublesome in the past and the last three visits to the campus produced three defeats.
On this occasion the return of Zack Elbouzedi was warmly welcomed by his colleagues and supporters and it was a case of ‘Zack is Back’ when he opened the scoring after only eight minutes of play.
This was far from a vintage display by the Blues but a win is a win and everyone from the Déise went home in a happy frame of mind. 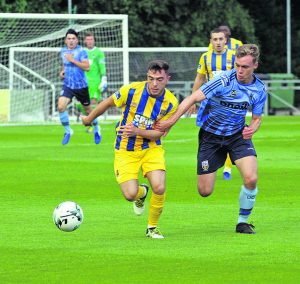 Corey Galvin on the attack for the Blues

Dean Walsh, who had replaced Michael O’Connor, scored the golden goal which halted the recent run of dismal results. He came on in the 74th minute and scored his wonder goal in the 86th minute. It was a strike right out of the top drawer. Blues goalkeeper keeper Matt Connor denied the students a breakthrough goal on seven minutes when Liam Kerrigan out muscled Maxi Kougoun inside the area and latched onto a through ball from Jason McClelland, but his shot was superbly saved.It was a crucial moment as the visitors struck the front at the other end seconds later.Zack Elbouzedi, who was returning to the side after picking up an injury on international duty, took a pass from Michael O’Connor and showed great skill to turn onto his right-foot to beat Tom Murphy with a neat strike from 12 yards.Matt Connor showed his class between the sticks when he kept UCD at bay with a top class save on 25 minutes when Mark Dignam set the ball up nicely into the path of Liam Kerrigan 20-yards from goal and his effort, that seemed destined for the right-hand corner, was brilliantly turned around the posts by the netminder.
A teasing Rory Feely cross into the penalty area nearly yielded a second Blues goal on 33 minutes when the skipper put in a brilliant delivery looking for Michael O’Connor, but the clearance from UCD defender Evan Farrell struck the crossbar before JJ Lunney shot straight at the keeper from the resulting corner kick.
Waterford missed a golden chance to double their lead with four minutes played in the second half. Cory Galvin fed O’Connor, who in turn sprayed the ball out to Shane Duggan who picked out the unmarked JJ Lunney six-yards from goal but he somehow diverted the ball wide of the target. Michael O’Connor was the next player to go close for the Bluers when he got on the end of a right-wing Rory Feely cross on 52 minutes but his header went wide of the back post.UCD showed their threat in attack and Matt Connor made a fine save to keep his side in front four minutes later when Jason McClelland set up Paul Doyle but his left-footed strike was parried away.
The Blues were pegged back on 68 minutes when, against the run of play, they conceded a soft goal.
Skipper Paul Doyle played the ball from the left-wing position, Rory Feely failed to clear and when it fell nicely for Liam Kerrigan just inside the area, he beat Connor at his near post with a right-footed strike.
Blues boss Alan Reynolds introduced Dean Walsh in the hope of getting a winner and he proved to be the key when he unlocked a resolute UCD defence with a stunning winner four minutes from time.
The striker met a delivery from John Kavanagh and with a swing of his left-foot, he arrowed an unstoppable strike to the far corner to send the Waterford faithful into wild celebrations.