Home » Sports » Dixie Hale – A Majestic Player For The Ages

Dixie Hale – A Majestic Player For The Ages 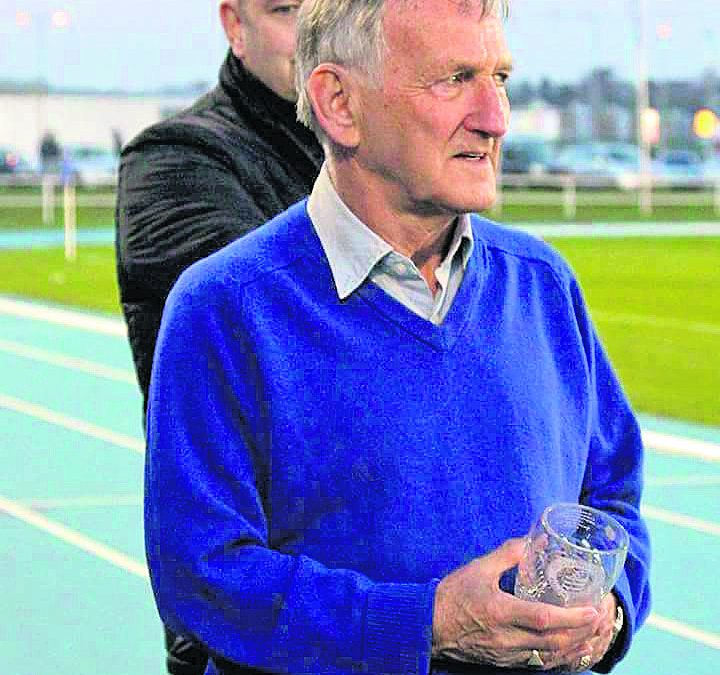 Many people who love football were saddened on Wednesday last when the news broke that Richard Dixie Hale had lost his fight for life in his adopted home of Swansea. Born in Waterford on the 29th of May, 1935 – the Ard na Greine man was one of the four Hale brothers who made their mark in football following in the footsteps of their father Alfie ‘Snr and their three uncles. Georgie, Alfie, Harry and Alfie ‘Jnr all wore the blue jersey of Waterford and in some cases the green representative shirts of Ireland in some guise or another.

Dixie began his football career with the Glenard club who came from the Stephen Street area of Waterford. Billy Galgey was the man who got him to sign for the club. He then signed for St Joseph’s just like all of the Hale brothers did at one time or another and he created history on one special occasion when he won the Under 15 League and the Waterford Senior League on the same day. At the tender age of 16 years he went to Kilcohan Park and he played under the guidance of Jimmy Nelson. His displays with the Blues caught the attention of the Cunningham family in Dublin who were the owners of Shamrock Rovers.

He signed a professional contract with the Hoops but as things turned out in Milltown he was the only full-time professional at the club and as a result the days in Dublin proved long and boring and after just one season he returned to Waterford. 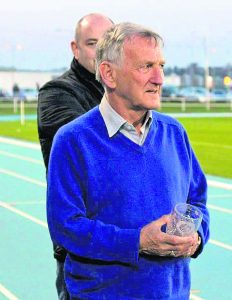 Dixie Hale pictured in the RSC in 2014 after being honoured by Waterford FC.

He played in the FAI Cup final for the Blues in 1959 (plus replay) and in doing so he became one of the youngest ever players to play in a cup final in Dalymount Park. In September 1959 Dixie moved to Swansea City and he played with the ‘Swans’ for two seasons and he played with some great players with that club including Len Allchurch, Harry Griffiths and Mel Charles. He played 34 games for Swansea and scored three league goals. In 1961 he moved to the North of England to play with Barrow where he lined out on 118 occasions and scored 16 goals. Workington was his next port of call and he enjoyed three excellent seasons with ‘The Reds’ scoring 10 goals in his 131 games for the club.

Ken Murphy, who had signed him for Workington, had moved on to Watford and in his role as manager he was determined to get Dixie to Vicarage Road and the deal was completed in 1968. Watford won the Division 3 League with Dixie (1968-69) and they held the mighty Manchester United to a 1-1 draw in Old Trafford in front of 63,000 fans. Between seasons 1967-68, 1968-69 and 1969-70 Dixie played 98 games for Watford and scored seven goals. After three wonderful seasons with Watford he returned to live in his adopted home of Swansea in 1972 and he went into management with clubs in the Welsh League. He retired playing professionally at the age of 35 years, but he continued to play part time up to the age of 48 years and his last playing appearance was as a substitute when he was 54 years old.

The classy wing-half was certainly a man for the ages. Dixie Hale has often been described by many as the best ever Irish born player never to be capped at full International level for the Republic of Ireland but there is a reason for this although it has never been made public. The Cunningham family of Shamrock Rovers never really forgave him for leaving their club and at that time selectors used to pick the Irish team and they were members of the selection committee. In fairness to Dixie he never held a grudge and he never regretted not playing for Ireland (at least publicly). He did however play five games for the League of Ireland including games against Northern Ireland, Scotland and England. Bobby Collins, the legendary Celtic, Everton, Leeds United and Scotland player, described Dixie as one of his toughest ever opponents. The clubs who had the pleasure of Dixie’s presence as a player or manager paid their tributes to him last week. 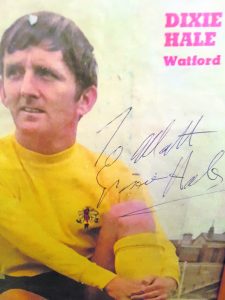 One of my prized possessions; a Dixie Hale autographed photograph from a Goal magazine of 1969.

Pontardawe Town FC (Dixie managed them): “We are sad to have lost one of our own today in Dixie Hale. A club favourite and an outstanding manager who was well liked and respected throughout football and he will be missed by us all. We are Ponty. RIP”.

Workinghton FC: “It is with deep sadness that we have to report the passing of one of our heroes from the Reds Third Division team, Dixie Hale. The number four shirt became his own personal property during his time at Borough Park and he was a great favourite with all of our supporters. Our condolences go to his family at this sad time”.

Watford FC: “We are deeply saddened to learn of the passing of our former player Dixie Hale. The Irish midfielder was part of Ken Furphy’s 1968-69 history-making promotion winning team and his time with the Hornets will never be forgotten.”

Waterford FC: “Waterford FC wishes to share its deepest sympathies with the Hale family on the passing of former Blues midfielder Dixie Hale. Dixie left us for Swansea in 1959. May he rest in peace.”

Dixie was a regular visitor back to Waterford and loved meeting Alfie and the Hale family and enjoying a few pints in Alfie’s Bar on Ballybricken. He also enjoyed playing in the Waterford Golf Club with Alfie and all of the other people who play there. Dixie was also a wonderful host when Waterford people went to Swansea to see him and many people have fond memories of their trips to Dixie’s adopted home. 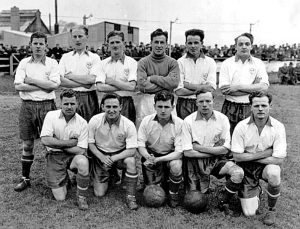 He was a charming man who at all times had a broad smile on his face.  An extremely modest gentleman Dixie preferred to talk about the wonderful deeds of other people rather than himself. He was a truly amazing person and his passing has left many people heart-broken, not least the entire Hale family. He would have celebrated his 86th birthday on May 29th. He is survived by his wife Janet (a proud Swansea lady) his daughter Andrea, son Neil, grandchildren and extended family. Thanks for the memories Dixie and sleep well now my friend. May God’s soil rest easily on your gentle soul.