Drama on Drama as ‘Courty advance

County Senior Football Championship Quarter Final
Ballinacourty 4-6
Kilrossanty 3-5
Seldom have we seen a game with more twists and turns than we saw a Fraher Field on Friday evening last when near neighbours Ballinacourty and Kilrossanty clashed at the Shandon Road Venue.This was always expected to be a close game and the players of the two respective sides did not let the sizeable attendance, paying in just under €3,000, at the game down as the game went right to the wire. 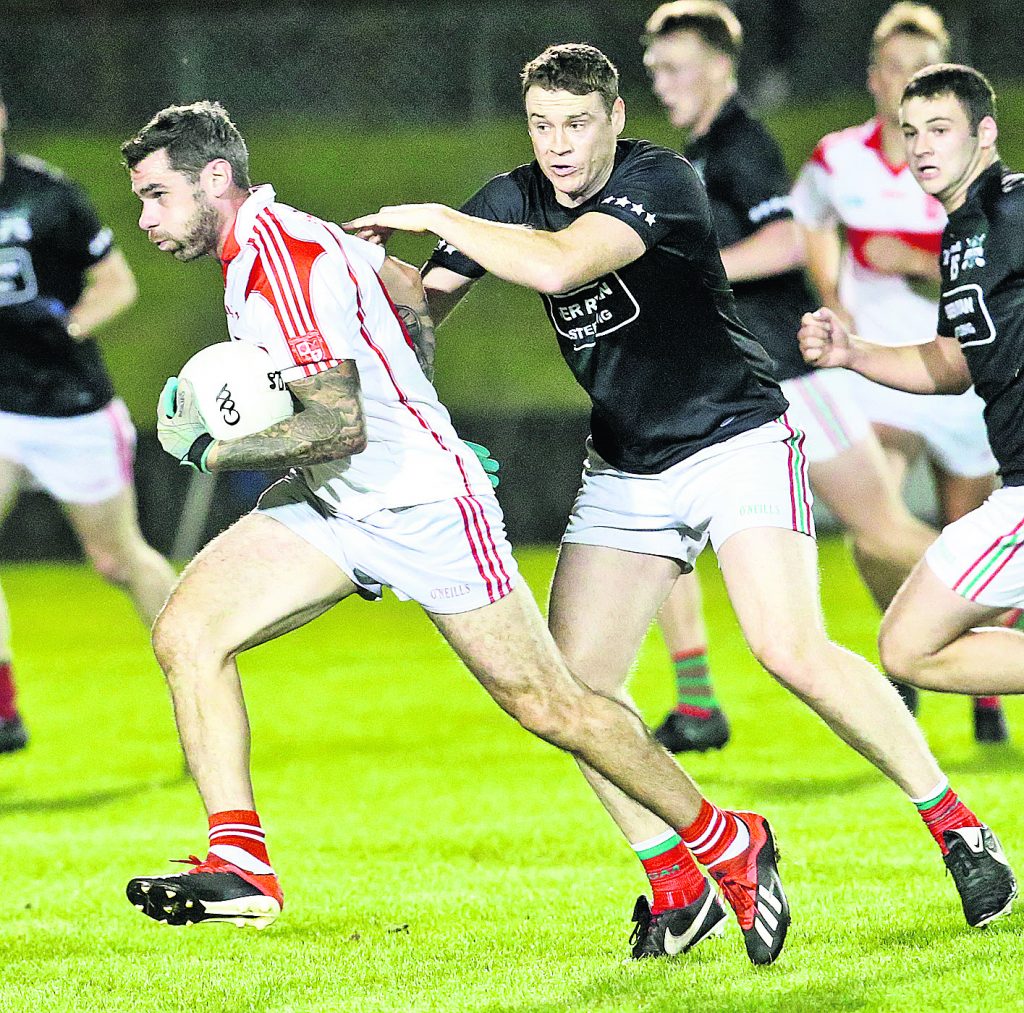 Stradbally's Shane Lannon in possession against Clashmore/Kinsalebeg's Jason Seward during the quarter-final of the J.J.Kavanagh & Sons Waterford Senior Football Championship in Fraher Field.

From the off this game had the makings of something special. As you would expect when two neighbouring sides clash in a game of this magnitude there was cards a plenty with yellow, black and red getting flashed at the players.There were penalties; four in total, there was sendings off on straight red cards, one for each team, there were mistakes made on the line when it came to substitutes and there were chances for both sides.Ballinacourty had a chance to win in added time at the end of the hour which they missed and Kilrossanty had a chance to send the game to extra time deep in stoppage time which they availed off.
There was less than 30 seconds on the clock and Kilrossanty had taken the lead through Paul Whyte.
But last year’s runners up were chasing the game after the next score as Conor Prunty who was tasked with trying to keep Tommy Prendergast quite was picked out by Neil Montgomery on five minutes and the inter county hurler made no mistake in dispatching past Dwayne Kirwan for the games’ first goal.An exchange of scores from Mark Ferncombe and Joey Veale followed for the two respective sides before the first major talking point of this game arrived on 14 minutes.
Patrick Hurney appeared to lash out at Pa Whyte in front of linesman Tom Mansfield and the Ballinacourty man was sent straight to the stand on a red card.
Kilrossanty’s first goal came on 22 minutes and appeared to be somewhat controversial from the stand. Tommy Prendergast was attacking the Ballinacourty goal and seemed to lose his footing and went to ground, but referee Anthony Fitzgerald judged that he got some help to go down from Brian Looby and he awarded a penalty. Paul Whyte shot straight down the middle of the goal beating Stephen Enright in the Ballinacourty goal to send his side back in front.
Three minutes later last year’s runners up further stretched their lead when Tommy Prendergast picked out Paul Whyte who again beat the former inter county net minder to give his side a double score advantage on the score board.The drama was not over yet however as a minute from the end of the opening 30 minutes, referee Anthony Fitzgerald awarded the second penalty of the evening, this time at the other end of the field as Neil Montgomery played in Conor Prunty who was pulled down.
David Looby was tasked with facing Dwayne Kirwan one on one from 12 metres and he made no mistake in reducing Kilrossanty’s lead to the minimum.However as he came back out to face the restart he appeared to have been struck by Mark Prendergast and after consulting his umpires the Kilrossanty man was forced to watch the rest of the game from the stand after he picked up a straight red card.Trailing 2-2 to 2-1 at the break Ballinacourty quickly levelled matters in the first minute of the second half and five minutes further in more drama arrived.
Mark Ferncombe was pulled down by goalkeeper Dwayne Kirwan who was issued with a black card and a penalty was awarded.
As with the rules applying to the black card Kilrossanty could not replace their goalkeeper until the next break in play so Stephen Prendergast stood between the posts for the kick but was beaten by Mark Ferncombe.For the restart Seamus Veale came on between the posts for Kilrossanty but word began to spread around the stand and onto the field that the Kilrossanty man’s name was not given to the referee as an official sub before the game meaning he had to be replaced minutes later by Josh Kay, who it seems was coming on initially.
Mark Ferncombe and Paul Whyte swapped scores before Michael O’Halloran with the aid of the crossbar levelled matters with five minutes of play remaining. Between Whyte and Ferncombe’s effort Kilrossanty struck a third goal as Donal Fitzgerald found Pa Cunningham to edge the Comeragh Men in front by one.On the hour mark the games fourth penalty was awarded when Brian Looby was pulled down but this time Kilrossanty’s third penalty in this game guessed right and Josh Kay saved from Mark Ferncombe to keep the scores level.
Five minutes into stoppage time Ballinacourty appeared to have won the game when Sean Whelan Barrett fisted over the Kilrossanty crossbar, but the game was not over. Paul Whyte made a late surge on the Ballinacourty goal but he saw his effort put out for a ’45. Josh Kay was brought up field to kick from 45 metres and he kicked high over the Ballinacourty crossbar to send this game into extra time.Both sides were back up to their full complement of players for the extra 20 minutes as David Looby came back on for Ballinacourty and Michael Walsh came on for Kilrossanty.Scores in extra time were hard won.
Midway through the opening first added ten minute period Sean Whelan Barrett gave his side the lead, and deep in stoppage time in the second added ten minutes the only other score of extra time arrived, again going to Ballinacourty as Darragh McGrath found Michael Maher who fixed to the net to book his sides place in the final four of the competition.