League of Ireland, Premier Division
Waterford FC 2 St Patrick’s Athletic 0
Waterford FC notched up their first home win of the season, at the third time of asking, following a 2-0 victory over St Patrick’s Athletic at a rain lashed RSC on Friday last.
Aaron Drinan, on loan from Ipswich Town, was named in the Republic of Ireland squad earlier in the week and he celebrated that fact by scoring the two goals in this contest.
Manger Alan Reynolds made three changes from the team which lost away to Dundalk the previous week and the partnership of Drinan and Scott Twine up front made a huge difference.
This was a match the Blues dominated from flag fall and they fully deserved the three points on offer.
There were many top class displays by the Blues players and now they would appear to have recovered fully from what was a really vicious opening set of fixtures which included away games on the plastic pitches of Derry and Dundalk. The attendance of over 2000 went home in a happy frame of mind and rightly so. In an explosive start to the contest, Jamie Lennon sprayed a brilliant ball out to the right-side of the penalty area for Dean Clarke on three minutes, but his effort was hacked off the line by Maxi Kouogun before Matthew Connor made a fine save with his legs to deny Chris Forrester seconds later. 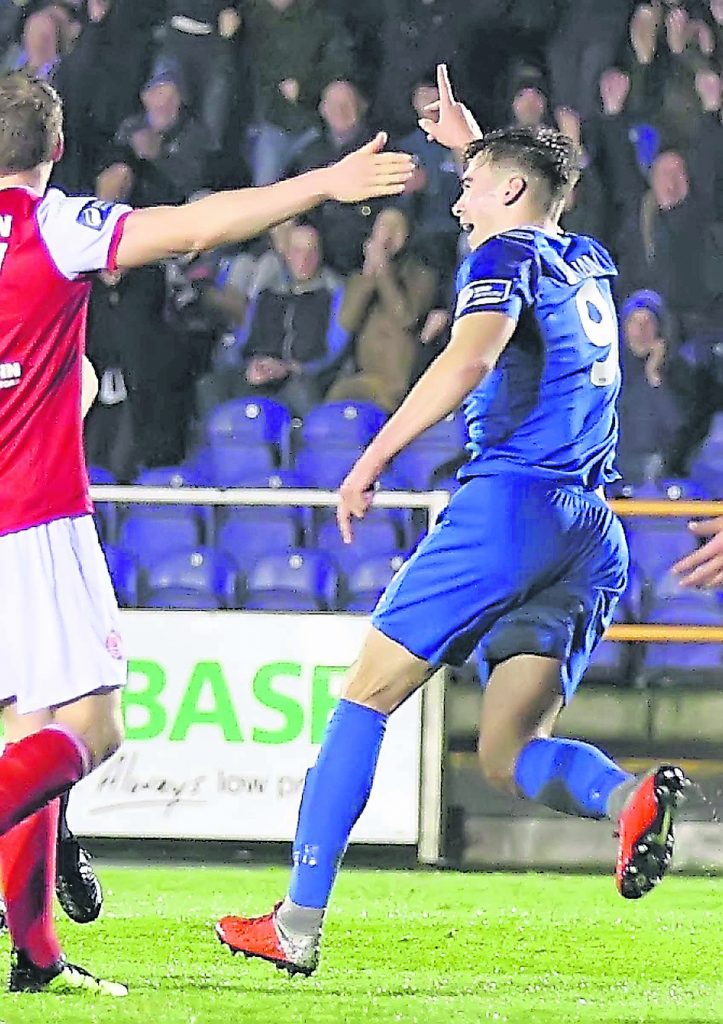 JJ Lunney picked out the run out on the left of Scott Twine a minute later, but his effort was saved by Brendan Clarke.The Blues had a great chance to open the scoring on 13 minutes when Scott Twine slipped the ball into the path of Zack Elbouzedi and his inviting cross to the back post looked a certain tap in for Aaron Drinan, but the striker failed to get a touch on the ball.Drinan made amends for that miss five minutes later when he opened the scoring.
Kevin Toner picked up a yellow card and for a foul on Bastien Héry and Kevin Lynch’s delivery from the resultant free kick was only cleared to Drinan whose header deceived goalkeeper Brendan Clarke from 10 yards.
There was a big let off for the Saints on 40 minutes when Aaron Drinan knocked the ball down to Zach Elbouzedi but his close-range shot came crashing back off the near post.
Drinan should have added his second goal in the first minute of the second half when he rose unchallenged to meet a Shane Duggan, who replaced Bastien Héry at the break, cross but the Under 21 International headed over from six yards.JJ Lunney forced Brendan Clarke into a fine save on 62 minutes when he cracked in a shot from 25-yards, but his left-footed effort along the wet surface was stopped.The Blues added a second goal a minute later.
Lunney picked up possession out on the left-side of the penalty area and put the ball on a plate for Aaron Drinan who finished past Clarke from close-range.The visitors had the ball in the back of the Blues net on 67 minutes when Brandon Miele cracked in a shot that came back off the post into the path of Mikey Drennan, who finished past Matthew Connor, but assistant referee Emmet Dynan ruled the goal out for offside.
Drennan went close once again to pulling a goal back for the ST Pat’s ten minutes later when he raced to the near post to meet a Simon Madden delivery, but he couldn’t direct his header
A brilliant last-ditch tackle from St. Patrick’s Athletic defender Lee Desmond denied Izzy Akinade a goal on 86 minutes and the Blues attacker had another chance two minutes later, but his shot was deflected out once again by the visiting defence.