Munster Youth Cup Quarter-Final
Tramore 8 Cahir Park 0
Tramore put the disappointment of losing to Drogheda Town in the FAI Youth Cup well and truly behind them on Saturday when they ran Cahir Park ragged to reach the semi-final of the Munster Youths Cup.Star of the show was Cameron Kent who scored an incredible five goals.
Kent had the first chance on seven minutes when he met a Niall Long cross but visiting keeper Adam Gallagher saved at his near post.Tramore took the lead on 12 minutes when Niall Long swept a Michael Brennan corner to the net at the back post. 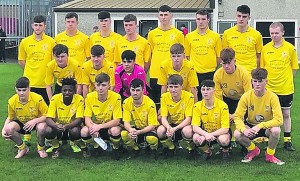 Cahir Park thought they had equalised on 23 minutes when David Brannigan’s wind-assisted free kick from the halfway line sailed over the head of Dylan Nolan but referee Gary Fitzgerald rightly ruled the goal out after a push on defender Eoin Hayes.Tramore went on the counterattack from the resulting free kick.Niall Long put the ball on the head of Cameron Kent whose header rebound off the crossbar. The clearance was deflected off the match referee into the path of Conor Butler, who finished to the back of the net from 16 yards.Dylan Nolan produced a top save to keep out a cracking effort from Cathal Berrigan on 25 minutes and Rhys Byron had a great chance to reduce the deficit for the visitors just before half time but he blazed wide from an advanced position.
Cameron Kent got the first of his five goals five minutes into the second half when he drilled a low right-footed shot under the body of Adam Gallagher from 14 yards.Tramore scored their fourth goal on 57 minutes Cameron Kent fired a rebound to an empty net after Michael Brennan’s shot was parried. Kent netted his hat-trick three minutes later when he beat Adam Gallagher with a cracking effort from the edge of the penalty area.Tramore scored another three goals in the second half with Cameron Kent responsible for two of those goals.
They were similar type goals as Kent cut in from the left on both occasions and fired two well struck right-footed shots past Gallagher.The seaside outfit scored a stunning eighth goal with the last kick of the game when Niall Long was fouled and Conor Butler beat Adam Gallagher with a brilliant left-footed free kick.