Deise aim to go one better

Ladies National Football League Division 3
Waterford v Tipperary
(Saturday, 2pm. Venue TBC)
Thomas Keane reports
All-Ireland Intermediate Ladies Football Champions Waterford play their first competitive game of 2016 on Sunday afternoon when they take on Tipperary in the first round of this years National Football League campaign.
Waterford have reached the division three final in the last two years but had to play second fiddle to both Armagh and Sligo respectfully at Parnell Park in both 2014 and 2015.
After winning the Intermediate Championship last year, the league is possibly the number one priority for Waterford in 2016 as a return to Croke Park on All-Ireland Final Day may well prove to be a step two far for a side which contains some outstanding footballers but may well need a year or two to establish themselves in the senior ranks.
Last year the Waterford management team used the league to blood new players into the intercounty set up and also to re-introduce players that were not available in recent years as well as get seasoned campaigners used to playing in new positions and this may well be the route used by Waterford again.
When the sides clashed in the league last year at Ardfinnan, Waterford were made to work very hard to ensure they remained unbeaten in the league up to that stage of the competition. 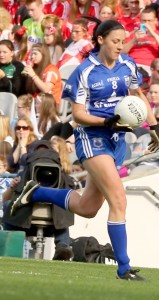 : Experienced players such as Linda Wall will be vital to Waterford’s quest for league success.

Tipperary proved to be the better of the sides in the opening half as goals from Laura Dillon and Aoife Ryan gave the home side a 2-4 to 0-6 lead at the break.
Tipperary came out for the second half hitting a third goal and a second for Aoife Ryan but Waterford when they called on their big guns as the second half wore on and ran out winners as Lauren McGregor and Michelle Ryan finished to the net to give Waterford a 2-12 to 3-5 victory.
When the sides met later in the Championship things were much more clear cut as Waterford ran out easy 6-18 to 1-4 winners at Fraher Field.
Both sides should include in their panel some very experienced players.
For Tipperary they will be looking to the likes of Lauren Fitzpatrick, Teresa McGrath, Louise Cadell, Bernie Ryan, Laura Dillon, Gillian O’Brien, Aisling McCarthy, Shauna Ryan, Sheelagh Carew and Niamh Lonergan and may also include some players from recent successful college sides like Scoil Mhuire from Carrick-on-Suir, the Loreto from Clonmel and Colaiste Dun An Iscaigh from Cahir.
It remains to be seen how many of the Waterford team which won last years Intermediate All-Ireland will feature in the league this year.
Sinead Ryan was recently named as captain for the year ahead with Katie Hannon as vice captain so both are expected to feature.
Last year players like the Murray sisters, Megan Dunford, Caoimhe McGrath, Mary Kate Morrissey, Nicola Fennell, Kate McGrath all got time to impress in the league and they took their chances and by the end of the year many of them were first choice players for Pat Sullivan.
While youth may well be given its chance again its important that experienced players like Mairead Wall, Louise Ryan, Maria Delahunty, Grainne Kenneally, Aileen Wall, Karen McGrath and Hannah Landers play along side them.
Tipperary last appeared in the All-Ireland Final in 2013 and while they have slipped back somewhat since then, with some exciting prospects coming through they will be hoping that 2016 will be good for them.
However Waterford’s greater experience and with the players hungry to add a league medal to the All-Ireland medal they won last year, Waterford should have enough to collect the points on offer in this game. 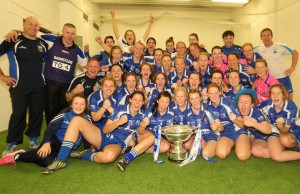 Waterford players celebrate following their All-Ireland IFC Final victory over Kildare at Croke Park last September. Waterford will be hoping to begin their league campaign when they take on Tipperary next Saturday.