County Senior Football Championship Group One
Ballinacourty 1-10
An Rinn 1-10
Liam Ó Lonáin produced a man of the match performance at Fraher Field on Friday evening last to help his side earn a draw in the opening fixture in their second Senior Football Championship outing.
Playing on the edge of the square he was instrumental in much of what his side did on the night and well have felt somewhat unlucky not to have got something more from this fixture.
It was Ballinacourty that opened the scoring on three minutes when Shane O’Donovan from a Mark Fives pass beat Odhrán Ó hUallachain for an early goal. 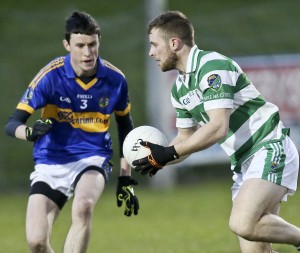 An Rinn however soon got into their stride and were unlucky not to have had green flags waved on four and six minutes as Liam Ó Lonáin drew good saves from Stephen Enright and Eoin Bergin.
The Gaeltacht men opened their account on four minutes when Cory Dé Róiste converted a ’45 following Stephen Enright’s save from Liam Ó Lonáin.
Ferdia Ó hAodha and Mark Ferncombe swapped points before Lorcán Ó Corraoin cut in from the stand side of the field to blast past Stephen Enright for a well-taken goal.
Shane O’Donovan and Mark Ferncombe followed up with points for Ballinacourty but An Rinn finished strong as Liam Ó Lonáin, Lorcan Ó Corraoin as well as Shane and Fergal Ó Cuirrin added points to give them a 1-6 to 1-3 lead at the break.
The third quarter proved to be an even affair as Patrick Hurney Mark Ferncombe and Cory De Róiste added scores. 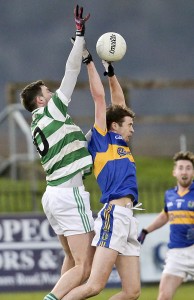