National Football League Division Four
Wicklow v Waterford (Sunday, 2pm)
Thomas Keane reports
Travelling to Aughrim to play Wicklow on their own patch is never an easy task but Tom McGlinchey’s Waterford are aiming to open their National League campaign with a win over Johnny McGee’s charges for the second successive season.
Twelve months ago the sides also clashed in Round One at Fraher Field, a week after Waterford’s win over UCC in the McGrath Cup Final at the same venue and recorded a fifth win in a row, emerging victorious by 0-14 to 0-10.
However, Waterford failed to secure their next competitive win until Sunday week last when they defeated Limerick by 2-7 to 0-7 in their McGrath Cup outing at Rathkeale.
Following that reversal, Wicklow picked up only one win over the remainder of the NFL, finishing below Waterford at the bottom of Division Four on scoring difference, and they’ve been slow to rise out of the blocks this year.
McGee’s side lost all three games played in the O’Byrne Cup, 1-14 to 0-13 to Westmeath, 1-15 to 0-9 against NUI Maynooth and in their most recent competitive game, went down by 1-9 to 1-5 against Longford.
While the Garden County have proven traditionally hard to beat on their own patch, it’s worth noting that since 2013, upwards of two dozen players have called time on their inter-county football careers.
Leighton Glynn, undoubtedly one of Wicklow’s greatest ever footballers, called time on playing football for the county in 2014 and since then has thrown his lot in with Wicklow’s hurlers.
In the last few weeks stalwarts like Patrick McWalter, Paddy Dalton, James Stafford and Alan Byrne have all retired while Paul Cronin and Tommy Kelly have declared that they can no longer give the commitment required by Johnny McGee. 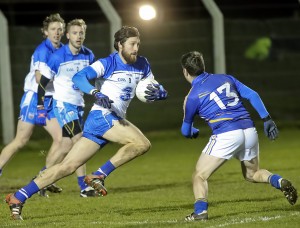 New Deise captain Tommy Prendergast will be keen to see his side get off to a winning start in Aughrim next Sunday. | Photos: Sean Byrne

However, Wicklow can still call upon some strong players for this game and will be looking for the likes of Robert Lambert, Dean Healy, Paul McLoughlin, Rory Finn, Anthony McLoughlin, Darren Hayden and Paddy Byrne to produce the goods this Sunday.
Much has been said in recent weeks about the non inclusion of any player from County Champions Stradbally in the Waterford panel in the early games played this year.
Waterford Manager Tom McGlinchey recently pointed out that between October and December last year he contacted over 50 players checking on their availability to be part of his 2016 set-up, with over 30 players committed to the cause.
It remains to be seen if and when any player from Stradbally will return to the fold but it should be pointed out that with them or without them, Waterford will still be able to field a strong team.
While the McGrath Cup yielded a mixed bag for Waterford – a 20-point reversal to Cork in Mallow followed by the 2-7 to 0-7 win in Rathkeale, the win in Limerick will no doubt have buoyed McGlinchey’s men ahead of the trip to Aughrim.
“The aim is to go a bit better than last year and to get out of Division Four,” the Deise boss told Kieran O’Connor at last Saturday night’s Park Hotel Awards.
“We’ve a fine panel assembled this year; Ephie Fitzgerald has come in as coach and the players are delighted with how training has gone so far but we’re aiming to get into Division Three for 2017. The win against Limerick was very pleasing, it’s always good to win on the road and to do so after the disappointment against Cork was also satisfying and it was great to see the lads pick themselves up and get a win, which we’ve not had for a while.
“We know it’ll be tough heading off to Aughrim next Sunday to take on Wicklow but we hope we’ll do the business, and that should set us in good stead for the rest of the campaign should we come away with the win we’re looking for.” 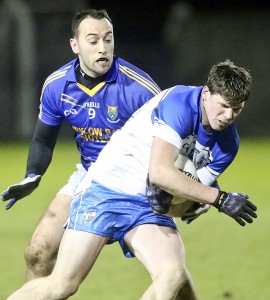 Waterford may well field a team similar to that which played Limerick which ought to mean that Stephen Enright will start between the posts with Tadhg Ó hUallacháin playing along side the O’Gorman twins in the full-back line.
James McGrath from The Nire looks as if he has settled into the number six shirt and will pick two from the likes of Stephen Prendergast, Michael Curry and Ray Ó Ceallaigh play alongside him.
In the middle of the field Conor Prunty and newly appointed captain Tommy Prendergast could be a pairing that will cause problems for most sides at this level of football in the year ahead.
In attack, Waterford have plenty of options open with the likes of Donie Breathnach, Michael O’Halloran, Declan Allen, Shaun Corcoran, JJ Hutchinson, Paul Whyte, Gavin Crotty, Patrick Hurney, David Power and Liam Lawlor all available to the management team.
Wicklow, probably by virtue of home advantage, go into this game as slight favourites, but Waterford will take great encouragement from their win in Limerick, which they’ll be aiming to build on come Sunday next.
WATERFORD’S NFL FIXTURES
January 31st, 2pm: Wicklow (a)
February 7th, 2pm: Louth (h)
February 28th, 2pm: Carlow (a)
March 5th, 7pm: Wexford (h)
March 13th, 2pm: Antrim (a)
March 27th, 1pm: London (h)