Cats legend backs Waterford to take next step
DJ Carey believes a long-awaited All-Ireland senior hurling title ‘is not far away’ for Waterford, but has also spoken about the need for supporters in particular to manage expectations about the Deise’s Championship chances.
Speaking at the WLRfm/Granville Hotel GAA Awards, the five-time All-Ireland winner expressed his wish to see his neighbouring county finally make it across the finish line – should all-conquering Kilkenny fall short, that is!
Wishing Pauric Mahony well on his recovery from injury, Gowran’s most famous son said the level headedness and humility of Derek McGrath’s panel would stand them in good stead given the challenges that lie ahead of them.
“I think one of these years that Waterford will win an All-Ireland, and it’s not that far away,” he told a packed Tapestry Room at the Granville, “but expectations have to kept level headed – you can’t get carried away”. 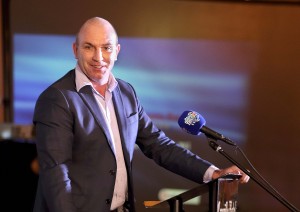 Carey feels that this year’s National League campaign, which opens against Kilkenny at Walsh Park on February 14th, will be of enormous significance for the Deisemen.
“It’s going to be a big step up from where you were at last year,” he said, directly addressing the players in the audience. “You’re going to be coming up against the very best teams and what I’d be looking for this year, if I were part of the management team, is to find a few more players to add to the mix, rather than winning the National League…
“So I’d encourage, if I could at all, to sit back and encourage the players and enjoy the hurling – whatever way the League goes, it goes, but give these guys a chance. I played under five or six managers under Kilkenny and obviously the most successful of those and one of the greatest managers there has ever been is Brian Cody, but it took him five years to sort himself out, the players out and the management out, to get the right formula…on and off the field.
“Success will come, and it will come in the not so distant future, but it has to be managed by the manager, but from a supporter’s point of view, give the team every drop of blood and every fibre you have, but also you must praise them, you must give them credit and don’t knock them.
“When I played the game – I retired once – and a lot of that was down to our supporters, who put the team and myself up on such a level, but whenever I played and Kilkenny played badly, I felt it was down to me, and at times that can hold you back, when as a player all you want to do is press on and go forward.”
Congratulating Maurice Shanahan on a remarkable year on and off the field, DJ Carey said he would be fully behind Waterford in their bid to land the glittering prize in the event of Kilkenny falling short. “And you’ll have a lot of support from Kilkenny people if we’re not playing you or if we’re gone out of the Championship – I’ll be right behind you, 100 per cent.”
DJ Carey’s own humility is an example to any young athlete about how to conduct one’s self both on and off the field. Arguably the most electrifying attacker to ever pick up a strip of ash, he’ll never lack for a deserved and fulsome welcome when visiting Port Láirge.