Goals the difference as Dubs prevail

National Ladies Football League, Division 1
Dublin 4-5
Waterford 0-13
Three in a row All-Ireland Champions – Dublin were made fight hard to earn a second win in this year’s Ladies National Football League when they took on Waterford at a cold and wet Fraher Field on Sunday last. The old adage that goals wins games proved true once again as Mick Bohan’s side hit a brace in each half to help them to a four-point win.
Waterford played with the wind at their backs in the opening half and raced into a six- point lead by the 13th minute a lead which they had stretched to seven by the 24th minute.
Two late first half goals however brought Dublin back into the game they trailed by just two points at the break, 0-10 to 2-2. 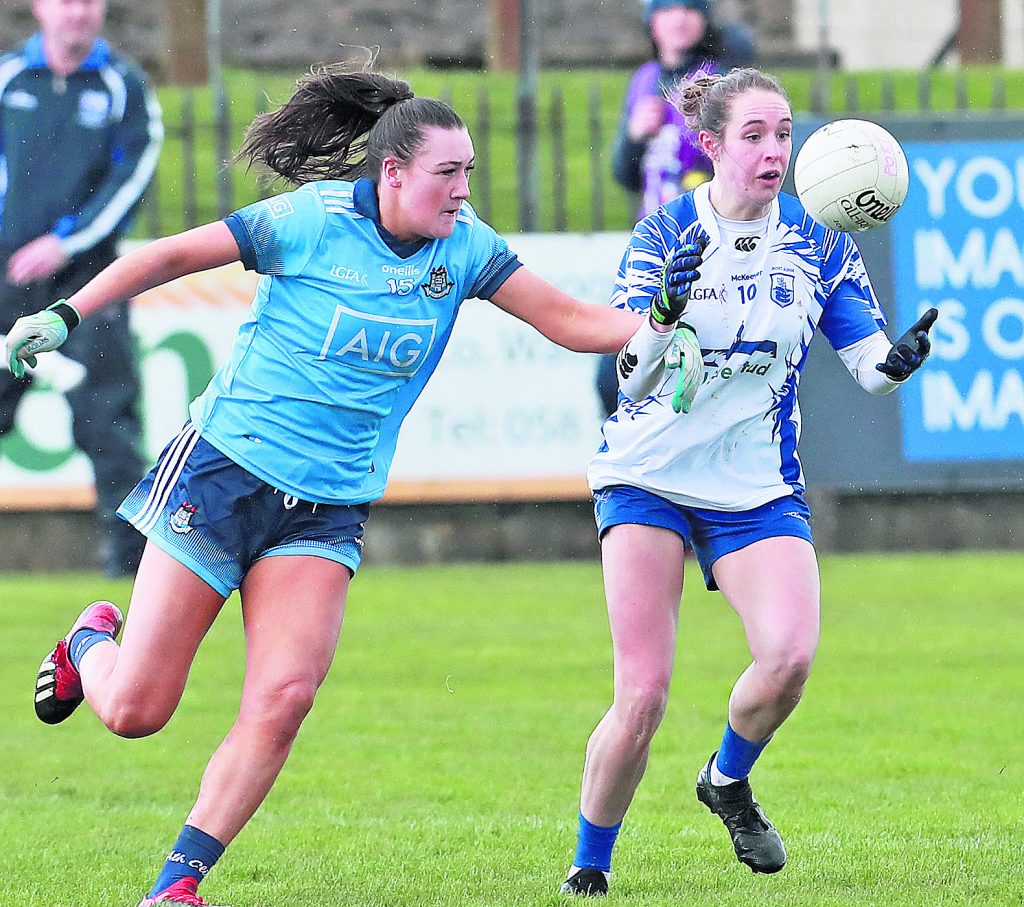 : Waterford's Roisin Tobin about to catch the ball against Dublin's Niamh Hetherton

Róisín Tobin, who is one of the longest serving players in this group, opened the scoring in the first minute and the home sides lead was doubled a minute later when Kelly Anne Hogan put over from a free. Róisín Tobin hit her second of the game on four minutes to put Waterford three up. Kelly Anne Hogan stretched Waterford’s lead to five by the ninth minute with a brace of frees and when Chloe Fennell put over four minutes later it was looking extremely good for Waterford.
Dublin hit their first score of the game on the quarter of an hour mark when Siobhan Woods pointed from play and three minutes later Carla Rowe pointed from a free. Katie Murray extended Waterford’s lead on 21 minutes and Kelly Anne Hogan followed up with a brace of successful frees putting Waterford in the driving seat. But Dublin are not All-Ireland Champions with the past three years for nothing and they began to call on all the experience garnered over the last few years.
Siobhan Woods netted their first goal on 26 minutes and while Róisín Tobin hit her third point of the game on the half hour mark, Dublin gave themselves renewed hope going into the second half when Noelle Healy netted their second goal of the game in added time which left them trailing 0-10 to 2-2 at the break. Caoimhe McGrath and Katie Murray landed scores for the home side in the first ten minutes of the half without the visitors responding.
But two Dublin goals in two minutes proved decisive.
Carla Rowe pointed on 42 minutes and two minutes later netted from the penalty spot, after a foul by full back Róisín Dunphy who was sent to the stand the next ten minutes after receiving a yellow card. On 46 minutes seven-time All-Star Sinead Ahearne netted a fourth goal to put the Dubs 4-3 to 0-12 in front. Once the visitors had taken the lead they were not going to give it up easily and they added points from Carla Rowe and Eabha Rutledge to go further in front.
Both sides decided to send on replacements over the following minutes which broke the flow of the game, but there was time for one more point in stoppage time and it went to Waterford with Caoimhe McGrath pointed the last score of the game.
Next up for Ciaran Curran’s side are two away sides firstly against Westmeath and then a very tricky game against Munster Rivals Cork. With the way results panned out on Sunday last the importance of a win against Westmeath cannot be highlighted enough if they are to retain their Division One status for 2021 as they won’t want to be going to Cork to secure a win to have a chance in avoiding relegation.