Home » Sports » Soccer » “He (Griffin) does that in training all of the time”. Alan Reynolds

“He (Griffin) does that in training all of the time”. Alan Reynolds

When Shane Griffin scored the stoppage time winner Alan Reynolds jumped higher than he had ever jumped before. The Blues manager had pulled a rabbit out of his hat and needless to say the Tramore native was in great spirits when he spoke after the match.
“We were on the front foot and put them under pressure during the opening 25 minutes. I also felt that we needed to score while we were dominant at that stage, but we didn’t. They gradually came back into the game and scored from a set piece. 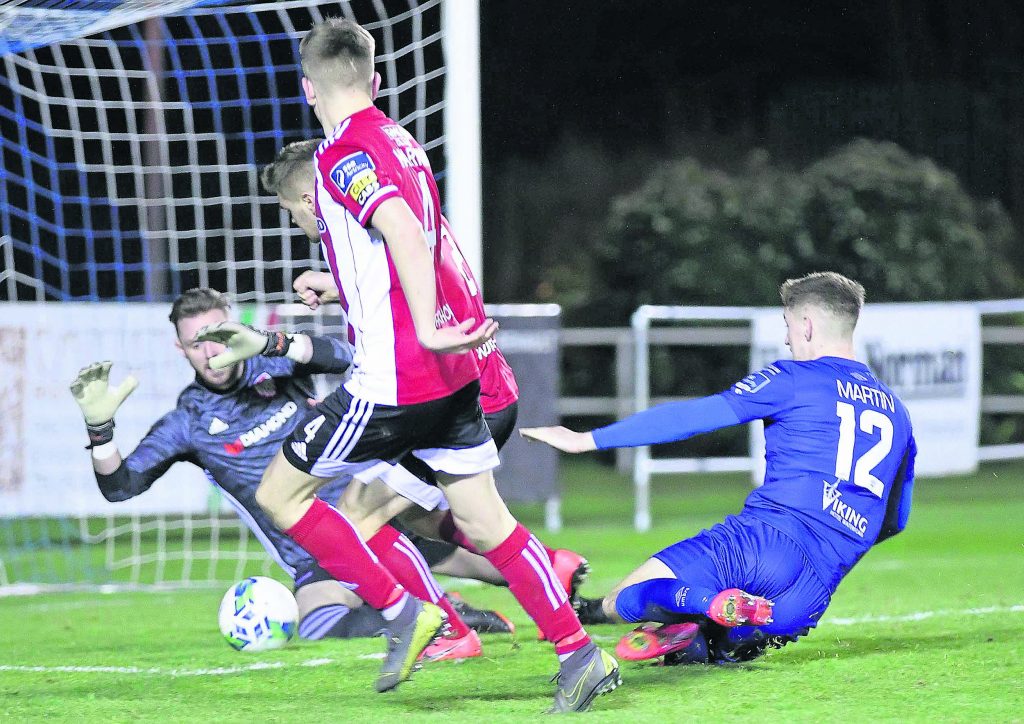 Waterford FC’s John Martin went close with this effort late in the game.

“I didn’t think that we started well enough against Shamrock Rovers where we were two nil down and the game was over, so we spoke about that. People were surprised tonight with our line-up and how we went about the game, but as I said that if we had capitalised early on, we could have built on it.
“They did get on top and it was a killer to concede, but the goal that we got just before half time gave us a lift. It’s a great goal from Sam and he wants to play further up because we’ve been playing him at right-back.
“He tells me that he can chip in with a goal or two, but he is just a great fella and a great professional. It was a great goal from him. The second half was scrappy, really scrappy and probably not as entertaining as the first half.
“I brought on Shane to get a stranglehold on the game because he can hold onto the ball, but he frustrated me a bit and I gave him a bit of stick. I’m glad that he put me back in my box with that strike! He is a local lad and he is eager to do well here. He does that in training, all of the time so it’s not something that I’m surprised to see him score that goal, but he needs to step up now the same with John Martin. I look at the Derry lads and they have young lads playing.
“We haven’t time anymore for they are young lads; they need to step up now. We still have a couple of players to come back, but we’re far from the finished article that’s for sure. I’ve seen things tonight that were pleasing, but we’ve also seen somethings that I wasn’t happy with. That result will help them though.
“I’m really pleased with the character that we showed tonight because we’ve come from a goal behind to win the game with two wonder goals. We kept at it and we dug deep. Can we be better? Of course we can, and we’ll always strive to be better, but it’s great and we look forward to Shels. It’s six points and all to play for.
“It’s great to get a home win. We’ve had a difficult start with games against Bohs and Shamrock Rovers so it’s good to get a win. I look at Dundalk and Rovers and it’s fair to say that they are miles ahead. I don’t think that there is much between the rest of us so it’s a great to get the win.
“The lads can now get to see what the crowd are like and I thought that early in the game we gave them something to cheer for and get behind us. Hopefully we can continue to do so. They’re happy tonight, but if we didn’t score at the end you could be asking could it have been better, so I suppose goals change everything.
“We have a lot to work on and we’ll do that. I know people will say that we were the better team tonight, but I was looking at it at times when they got a stranglehold like I said on it. They are a good side, they are in Europe this year, good investment, so to shade it and win is a real credit to the players.”
—