Noel Hunt, the 35 year-old Waterford born native last week took up an offer to become the assistant manager of League Two outfit Swindon Town, which of course is owned by Lee Power, the man who saved Waterford from possible extinction from League of Ireland football when he arrived here in 2016.
Swindon have been struggling somewhat this season and the club decided to relieve Phil Brown of his managerial duties late last week and they moved quickly to appoint Richie Wellens as his successor. 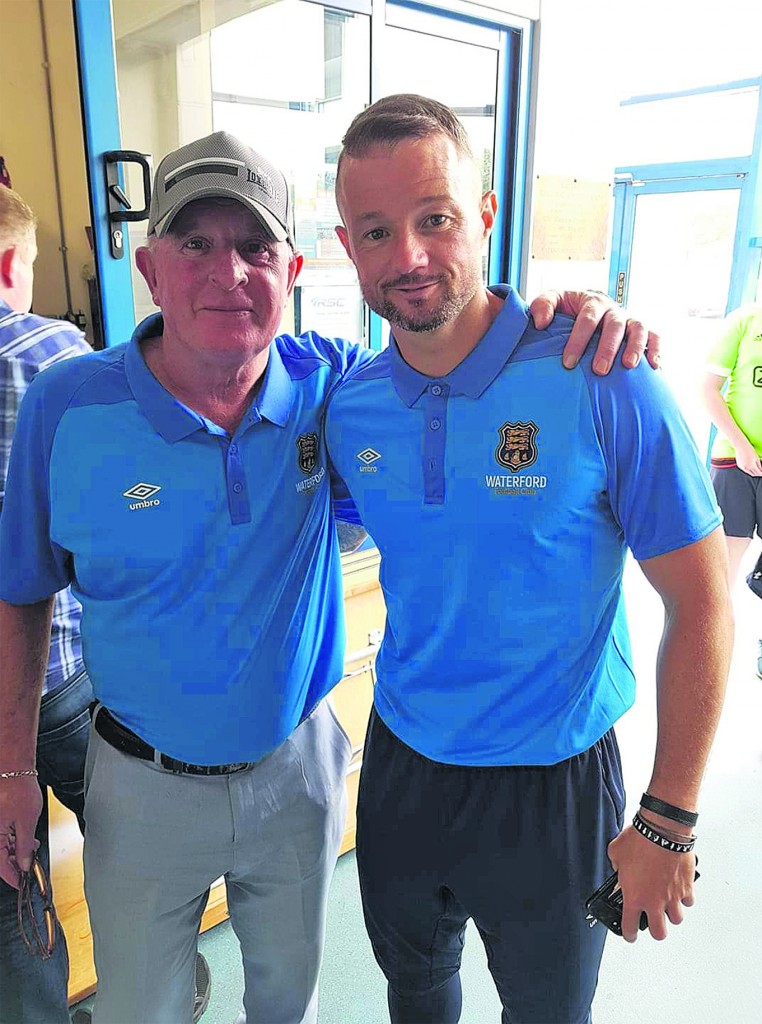 Wellens, who began his playing career with Manchester United, has managed Oldham Athletic and Blackpool in recent times also. The club are currently in 17th place on the league table. During the announcement of the Wellens appointment it was also announced that Noel Hunt would be his assistant and that of course meant that the popular Waterford player-coach would be leaving his post at the RSC and taking up his new position with immediate effect. Speaking on Wednesday last from the County Ground, the home stadium of Swindon Town FC, Noel explained how the appointment came about and he also spoke about his sadness at leaving the Blues.
“The move came completely out of the blue to be honest. When I was offered the position I just had to take it because my family live just 40 minutes away from Swindon as they have done for the past ten years so it was an offer I just could not turn down. Having said that me and the family were committed to coming back to Waterford in January and remaining on for the season but when I weighed up all the options this is a great move for me because I eventually want to manage over here in England and this is a great first step for me.
It’s sad that Phil Brown had to lose his job but that’s the way professional football works. It’s a results driven profession.”Noel then spoke about his period of time with Waterford FC this year and how much he loved it. “I cannot thank Alan Reynolds enough and that goes also for Franny Rockett, Paul Cashin, Dirk Heinen and all of the boys on the coaching staff. During the months I was at the RSC I learnt so much in that time and I will be grateful to them for ever more. The way ‘Rennie’ worked in the dressing room was incredible. The time and effort he put in was something I had never seen before during my long career in Scotland and England. The same goes for him on the training ground during the week. I will always be proud to call him a friend for ever more. Franny Rockett is another remarkable and enthusiastic character. Last week he was in Germany and traveling around to different clubs who play in the Bundesliga and watching their training methods. His thirst for knowledge for such a young man is truly amazing. Then we had Paul Cashin. ‘Cash’ is the old hand who never gets flustered and I suppose at times he kept us all in place and in order when things got heated. He has seen it all over a long period of time and his experience was invaluable not only to us but also to the players. 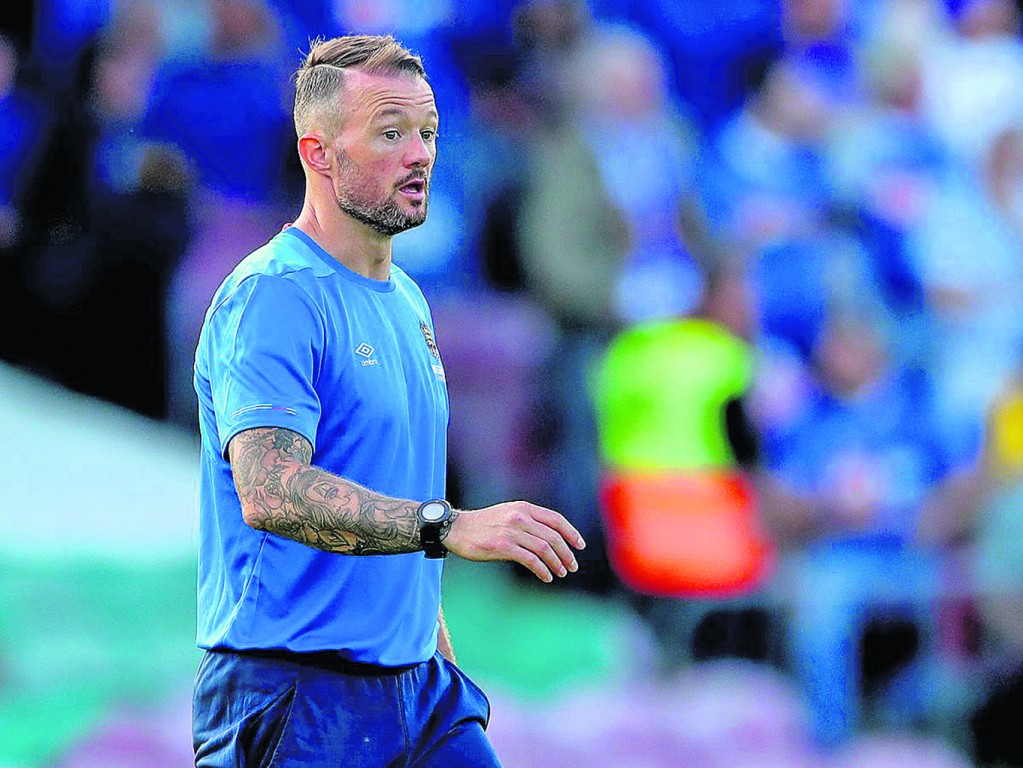 Noel Hunt coaching at the RSC

“What can I say about Dirk Heinen ? He has played at the very top level and has made Matt Connor and Niall Corbet better goalkeepers. He even improved Lawrence Vigouroux when he played here with us. At the moment he is working with Paul Martin and you can see him coming on in leaps and bounds during the past few months. Add in Doctor Sinead Fitzpatrick and physio Michael O’Sullivan and you get an unbelievable team who work so hard between the scenes every single day of the week, both day and night. Then there is ‘Snackbox’ (Pascal Keane). He is a legend, pure and simple. Just like Paul Cashin he has done and seen it all and his input since he came back to the club has been amazing. “The club are back in European football for the first time since 1986 and I am truly thrilled and delighted for ‘The Boss’ of the club, Michael Walsh. Yes, Michael is ‘The Boss’. What a man. He is like a father to each of us and all of the players adore him. I will miss ‘The Boss’ big time. He hugged me when I came back to the Blues this year and my only regret is that I did not get the opportunity to hug him before I came back over here. I will be back to see the Blues play next year and I will hug him then. When I was with the club on loan many years ago his grandson Richie was only a little boy but look at him now. He is huge and it’s wonderful that Richie is now helping Michael in the gear room.
“What I noticed when we played away this season was the way the home club officials and indeed managers described us as a family knit squad. That remark was said to us in places like St Patrick’s Athletic, Shamrock Rovers and Sligo Rovers and it was lovely to hear it. It was correct and it was all down to the people I have mentioned.”
Noel was delighted when he played a major role in getting Waterford FC back on the European stage once again and he was keen to talk about this achievement. “I genuinely believe the magnitude of what the players achieved has not been realised to be honest. At the start of the season the pundits said we would do well to hold our place in the Premier League, considering we had just come up from the First Division.“However every single player played their part into getting us a top four position and I genuinely mean ever single player. Some may have played more often than others and we did have bad times as well as good times but we saw it through to the bitter end and looking back now my time with the Blues this year was perhaps the most enjoyable period of my life to date. I think some people thought I was coming to Waterford to bring the curtain down on my playing career and pick up a few quid but was definitely not the case.
“I got a warm welcome from everyone, especially the fans in Block E of the stand in the RSC. To hear them chanting ‘Hunty’, ‘Hunty’, ‘Hunty’ from the moment I arrived was amazing and I would like to think I played a part in making it a season to remember for them and of course even the people who thought I was coming back for an easy ride. I just hope everyone will continue to support the club in 2018 and I will definitely be back from time to time to support the team when I get the chance next year. It could be a huge season for the lads. “There are two more people I would like to mention also. Martin Dunphy works hard to get money into the club and he has a good working relationship with Jack Power. Tony Burke, over in the office, is another vital cog in the wheel and those guys must not be forgotten. Darren Sealy and Keith Fitzgerald are two more lads who played a huge role this season. The training pitches and of course the main pitch are pristine and there is no doubt that the facilities at the RSC are every bit as good as any pitches in England.”
Noel concluded by speaking about his new chapter in his football career with Swindon Town. “As I said earlier it is not nice when someone loses their job but I will now crack on with Richie Wellens. We had our first training session on Monday and we had them in again on Tuesday and they are a decent bunch of lads. We are in 17th place on the league table but when you look at the positive side we are just nine points off a play-off place. We are working hard on getting them playing properly in the right positions and not wasting energy in the wrong positions. We will have to improve defensively but many hours of hard work on the training ground will help on that side of our game.
“I have already been on the road to Port Vale to see them play because we play them in two weeks time. We play Carlisle United this weekend at home and Richie and myself will have the lads well prepared for that game. We are looking forward to our time with Swindon but I will always have a special place in my heart for Waterford FC and all of the people in the club and the supporters.”