Lee O’Connor, who joined Manchester United from the Villa in the summer of 2016 was called into the full Republic of Ireland squad for yesterday’s (Monday) UEFA Nations League game against Denmark. Martin O’Neill, the Irish manager invited 18 year old Lee to join the squad for training ahead of last Thursday’s friendly game against Northern Ireland and after impressing in those sessions, O’Neill drafted him into the squad for yesterday’s game. 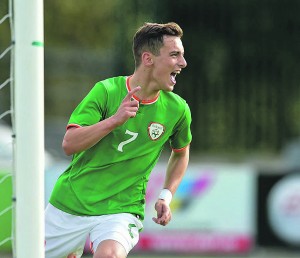 Lee O’Connor was called in to the Republic of Ireland squad last week.

Captain of the Irish U19 team, O’Connor has been hugely impressive during his two seasons at Old Trafford and there is no doubt he is destined for greatness in the game.
In the recent past Waterford born players Jim Beglin, Noel Hunt, Stephen Hunt, John O’Shea, Jim Goodwin, Eddie Nolan and Daryl Murphy have been capped at full level and it’s wonderful that we have another star to watch wearing the green jersey for many more years to come.