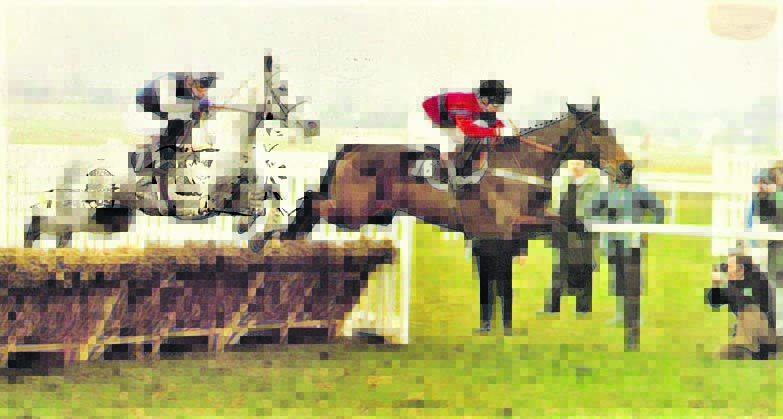 Every now and then, a horse captures the heart of an entire nation. Such was the case in entirety, when it came to Dawn Run.

TG4’s Laochra na Rásaíochta takes a look at Ireland’s most famous National Hunt horses from the 1970s right up to present day, recounting their most brilliant feats through wonderful archive footage and interviews with those at the heart of their respective successes. The remarkable story of Dawn Run was placed under the spotlight for the penultimate episode of the much applauded series, the super mare who was trained by Paddy Mullins, and owned by Waterford woman Charmian Hill.

The documentary provided a remarkable level of insight into one of the most famous stories of jump racing, with Dawn Run remaining the only horse ever to win both the Champion Hurdle and the Gold Cup at the Cheltenham Festival, a feat unlikely to be ever repeated. From hands-on ownership, jockey rivalries and ultimate tragedy – the documentary held a stranglehold on its viewership right from the beginning.

Punters outside Davy Sauvage’s on the morning of the 1986 Gold Cup were pictured in droves, all laying on the same horse – ‘the best mare in the country, you’ll never get another one like her’.

Tony Mullins, who rode Dawn Run to many a victory said ‘any discipline, hurdling or chasing, two miles or three miles – Dawn Run could do it’.

One horse ever won the top race in Ireland, England and France in the same year. Again, this was lauded as a feat highly unlikely to ever be replicated.

The story of Dawn Run began in the village of Goresbridge, which lies on the border of Carlow and Kilkenny. The yard was the base of one of the greatest ever trainers, Paddy Mullins – father of Willie, Tom & Tony Mullins.

Training horses on his eye, by 1982, Mullins had enjoyed almost 30 years of glory. That same year, a horse arrived that had surpassed any ever in his possession in times prior. Tony Mullins recounted that an early temperament noted in the mare wasn’t in fact that, but purely determination.

An unusual horse was coupled with an equally unusual owner, as Charmian Hill would come to Mullins’ yard to ride Dawn Run herself. Paddy’s wife Maureen Mullins, told of how Hill came out one day and fell, breaking her leg on the gallops. When she came back, she was twice as keen! The horse and owner were very well matched, as two strong characters. 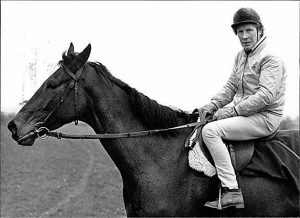 Mrs. Hill also rode in races. Her determination to stay racing into her twilight years earned her the tag of the ‘Galloping Granny’. Her son, Jeremy, admits she was fearless. Journalist Brendan O’Rourke’s first time seeing Dawn Run was at Tralee in 1982, and he admitted that when he saw a woman in the saddle, he said he could not bet on this horse. When he found out she was 62, he was gobsmacked – but lone behold, she succeeded and they won the race. A few days later, Mrs. Hill’s license was revoked on account of her age.

Dawn Run’s early races showed huge promise. The promising young horse was then coupled with a promising young jockey, in Mullins’ son Tony. He recalled his father grabbing his elbow going into the winners enclosure at Leopardstown, and quietly whispering ‘I think this is the one we’ve been waiting for all our lives’. Tony won aboard Dawn Run at Aintree & Punchestown in 1983, but later that year after a win at Down Royal, Mrs. Hill approached the jockey.

“I won quite well and when I came in, Mrs. Hill said now that she looks like a Champion Hurdle mare, you won’t be riding her for the rest of the season. I nearly fainted.”

The owner was adamant that she wanted someone with experience, and that proves to be the twice British Champion Jockey, Jonjo O’Neill, from Castletownroche, Cork. Willie Mullins admitted that no one in the family agreed with the decision, but there was little that could be done about it.

It sparked a source of debate throughout the country at the time. Many felt Mullins needed to be shown loyalty, and O’Neill admitted that he got a better tune out of the mare than he ever could. O’Neill narrowly won the Christmas Hurdle at Kempton, before scoring aboard Dawn Run in the Irish Champion Hurdle at Leopardstown.

As the run in to Cheltenham 1984 intensified, extensive press coverage of Dawn Run became widespread, something that her trainer found hard to handle. Dawn Run had lost at Cheltenham the previous year, and it became incredibly important to Irish people that this year would yield success.

Long-time rival Buck House was among the challengers, but it was a 50/1 shot Cima gaining ground on the front-running Dawn Run, who was looking for a big jump. Dawn Run just about managed to hold the lead to the end, in a great relief for all that led to euphoria.

Tony’s next chance to ride Dawn Run came when O’Neill was injured for the French Champion Hurdle. Having won in Ireland & England, victory in Paris completed a historic treble. 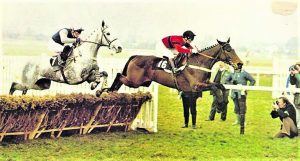 Dawn Run on the way to winning the 1984 Champion Hurdle at Cheltenham.

Mrs. Hill decided now was the time for Dawn Run to jump fences. In her first run over fences, Dawn Run was injured and missed the next twelve months of racing.

Tony Mullins was back in the saddle for the first two races on return, and she won both with ease. All eyes were firmly upon the Gold Cup.

“She went into the Gold Cup in her fifth run over fences. He (Paddy Mullins) was worried about it, he knew she wasn’t a natural jumper.”

The Holsten Chase proved the perfect preparation, a four horse race in January that Dawn Run was expected to win with ease. It was seen as Tony Mullins’ chance to secure the Gold Cup ride.

Dawn Run was coasting in the lead, in her best jumping performance to date – before unseating Mullins at the last open ditch.

“About halfway to the ground that day, as I left the saddle – I said there’s my Gold Cup gone.”

Mrs. Hill admitted she blamed Mullins for the fall and claimed he jumped too freely throughout. An awkward situation to say the least, if the hype for the 1984 Champion Hurdle was bad, the lead-up to the 1986 Gold Cup was a wholly different level.

Local pride shone through at the Waterford bookmakers on the day, most betting of course being on Dawn Run. Nearly everyone in Waterford backed the horse, as bookmakers reported a ‘hell of a lot of interest’. It would be ‘better than an All-Ireland’ if she won. The expectation was unprecedented.

After the third last, the field started to crowd up around the mare. O’Neill couldn’t believe the proximity of the competitors, as they had ‘gone some gallop’. They passed Dawn Run as if she were standing still. Going down to the last, it looked like Dawn Run was beaten. No one could believe their eyes.

Willie Mullins said to himself at the time that she was beaten, he closed his eyes, turned away and said there’ll always be next year as he walked in back beneath the stand. Forgive & Forget held the lead along the near side, and then came the famous words. 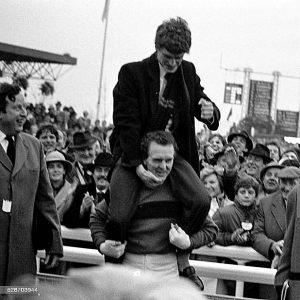 Jonjo O’Neill lifts Tony Mullins on his shoulders after winning the Cheltenham Gold Cup in 1986.

“The mare’s beginning to get up.”

Dawn Run had won the Gold Cup. A magical moment, it was the thrill of a lifetime for many a punter. The boisterous natural reaction of the Irish crowd drove Paddy Mullins mad, to the point where he left the parade ring! It was an outstanding training achievement. It was like a former featherweight boxer becoming world heavyweight champion.

A journalist turned to Tony Mullins and asked if he was disappointed that he had missed the Gold Cup. The response was emphatic.

“Do you realise my family have just won the Gold Cup? I thought it was a horrible question. The excitement outweighed losing the ride myself.”

By surprise, over came Jonjo O’Neill to put Tony on his shoulders over to the presentation. It became an iconic photo in racing history that showed the measure of O’Neill as a man.

“He made the mare. I didn’t make the mare. I was just lucky enough to get on her. Tony had done nothing wrong to me, all he had done was help me.”

However, an anti-climax followed. Brendan O’Rourke noted that on the way back from Cheltenham a couple of years later, he was sitting beside Paddy & Maureen Mullins, when O’Rourke happened to mention Dawn Run. The response was “I’ve never been able to look at that tape”. Paddy had never gotten over his son not riding the Gold Cup winner.

Tony Mullins would never ride a winner at the Cheltenham Festival, but a famous victory on the mare was just around the corner. Dawn Run would take on Buck House, the Champion Chaser in a famous match.

Tommy Carmody was aboard Buck House with Tony on Dawn Run. It was a one-off in history and an enormous novelty at Punchestown. Money came in from all sides to build a winner takes all prize of £25,000. All sides, except one.

Mouse Morris, trainer of Buck House recalled that Coolmore Stud put in £10,000, Seamus Purcell put in £5,000, the Racing Board put in £10,000 and Punchestown Racecourse also put in £5,000. There was zilch from Mrs. Hill, who felt that she did not need to put in any money as Dawn Run was the star attraction. 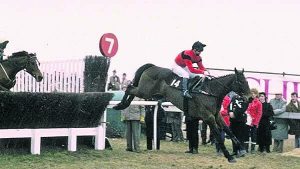 Dawn Run went off at 1/2 with Buck House 11/8. The distance was two miles, which suited the latter perfectly. The weight would also give Buck House the advantage, the weights being 10-7. Paddy Mullins said they could carry whatever weight they want. For Tony, it was a chance to exercise some demons.

Stride for stride, Dawn Run was the narrow leader before meeting the second last all wrong. Carmody slipped through on the inner, Mullins nearly fainted. Dawn Run in the end held out by a couple of lengths in a tremendous spectacle.

“In all the times he didn’t ride her, winning the match made up for all of that.”

Now, Mrs. Hill had her eyes set on an even bigger prize – The French Champion Hurdle once again. A move seen by many as greed, and not a wise decision to head back hurdling. It was likely the prize money that talked.

Tony Mullins was among many that considered it a mad decision, which was again likely why French rider Michel Chiroi was trusted with the booking.

On a blistering hot day in Paris, Dawn Run was running her first race over hurdles in two years with a jockey that had never ridden her. Falling while going at a hurdle on the back straight, the fifth last, and never again got up, having broken her neck. Dawn Run was only eight years old.

It was no longer a sports story or a racing story, but a massive news story – Dawn Run carrying the front page of the following day’s Irish Times. The entire nation was crestfallen. It was an unthinkable tragedy.

To this day, Dawn Run’s stable remains empty and silent. When a racehorse dies, the trainer normally moves on quickly without a backward glance. Dawn Run was different. Paddy Mullins couldn’t bear to think of her.

Like many of history’s great tales, it ended in tragedy. Dawn Run left behind a legacy like no other, still being a household name almost 40 years later. For people in Waterford and across the world, she will always be the mare that captured the heart of the public. It was not beauty that killed this beast, but rather a regretful decision that still hits a nerve for many, and likely always will.