FAI Cup Quarter-Final
UCD 2 Waterford FC 1
A rather disjointed Waterford FC side bowed meekly out of the FAI Cup in the Belfield Bowl on Friday night last. The Blues did not manage a decent shot on goal during the contest and unfortunately they brought the form they displayed in the second half against St Patrick’s Athletic the previous week into this game. The home side scored with their first attack of the match and from then on it was clear that the Waterford team were going to play second fiddle for the remainder of the game.Blues boss Alan Reynolds made four changes to the side that lost to St. Patrick’s Athletic with Niall Corbet, Garry Comerford, Paul Keegan and Dean O’Halloran coming into the starting eleven in place of Matt Connor, Rory Feely, Sander Puri and Courtney Duffus and there were also some positional changes but sadly the new look outfit did not cut the mustard on the night. The Students played a nice brand of counter attacking football and three of their players really stood out.
Central defender Liam Scales was rock solid at the back. Greg Sloggett ran the show in the middle of the park and Gary O’Neill once again proved what a really wonderful servant he has been to his club. 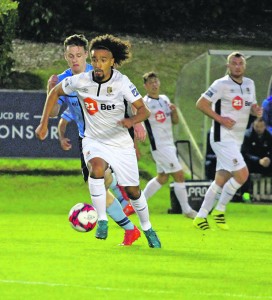 Bastien Hery takes on the UCD defence in the FAI Cup last Friday.

The best team won this game and now Waterford will have to buckle down and get back to the business of winning league points beginning this Friday with a home game against Bray Wanderers.
The Blues fell a goal behind on 20 minutes when Greg Sloggett got the better of Bastien Héry and played the ball in for Conor Davis who toe-poked it past Niall Corbet from deep inside the penalty area.The Blues were rattled by this goal but conceded a second goal six minutes later. Jay McClelland’s delivery was not cleared by the visitors and Timmy Molloy beat Corbet with a cracking drive from just outside the penalty area.Waterford made a change on 37 minutes with Courtney Duffus coming on in place of Izzy Akinade as the Blues reshuffled the deck.
It yielded their first chance on 41 minutes when Gavan Holohan latched onto the ball 22-yards from goal, but he failed to trouble UCD keeper Conor Kearns as the ball went high over the bar.
The Blues made their second change of the game at the break with Stanley Aborah replacing Dessie Hutchinson and he showed his capabilities inside the opening minutes of the half, but still the Premier League side didn’t make UCD keeper Kearns work.
The Students could have grabbed their third goal only for a brilliant Niall Corbet save on 57 minutes. Jay McClelland started the move when he sent in a cross that was laid off by Conor Davis into the path of Timmy Molloy, but his cracking effort from 16 yards was superbly tipped over the bar. The Blues were awarded a penalty and a lifeline back into the game on 78 minutes when Gary O’Neill upended Rory Feely inside the area and referee John McLoughlin pointed to the spot. Up stepped Stanley Aborah and he beat keeper Conor Kearns to give hope to the travelling faithful.
One would have thought at that stage that the visitors would kick on and try and secure a replay but they simply did not have the guile to score for a second time against the talented