Waterford FC 4 Cobh Ramblers 2
Waterford FC secured three vital points when they defeated Cobh Ramblers at a rain lashed and windswept RSC on Saturday afternoon.
Jamie Lee gave the Blues the lead after 12 minutes with a well taken free-kick. Three minutes later they went two goals in front when Dean Larkin scored from the penalty spot after Jamie Lee had been fouled.Cobh Ramblers pulled a goal back on 39 minutes through Sam O’Driscoll who headed home from deep inside the penalty area. 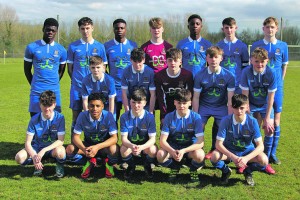 The Waterford FC U15 squad

Lakon Oki regained Waterford’s two goal advantage after 52 minutes. He headed home after Paul Kiely’s right-wing corner kick was not properly cleared.
Back came the visitors and Sam O’Driscoll scored his second goal on 78 minutes with a fine header but shortly afterwards Charlie Binnions secured the win for the home side. This was a much needed boost for Derek O’Brien’s charges and hopefully they will kick on from here and start moving up the table.