Home » Sports » ONCE MORE UNTO THE GAA BREACH

ONCE MORE UNTO THE GAA BREACH

The ever-decreasing window between the end of the club season and the resumption of inter-county activity is one of the pressing thoughts ahead of next weekend’s inter-county bows for Waterford’s senior teams.
Both our hurlers and footballers are scheduled to play at 2pm next Sunday, with Derek McGrath’s charges taking on Limerick in the rebranded Munster Senior League at Carriganore. Out west in Páirc Uí Shíotcháin, An Rinn, Tom McGlinchey’s McGrath Cup holders take on Cork, whom they famously defeated in last year’s competition.
Fresh from a break, and the Club Deise NHL medal presentation night at the Park Hotel on December 27th (see Sport 4 and 5), Derek McGrath will be keen to see his men hit the ground running against TJ Ryan’s Limerick, who defeated Kerry by 2-23 to 0-18 on Sunday last. 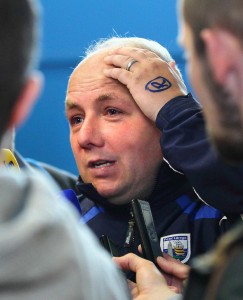 That win at the Gaelic Grounds featured 10 different scorers, and it would be a brave man who’d suggest they’ll get anything remotely similar in scoring terms against a Deise defence which proved so resolute throughout last season.
With several young introductions to the panel made over the close season, it would be a surprise if McGrath didn’t use the initial rounds of the League with some level of experimentation.
And with the panel being put through their paces on Bobby O’Byrne’s gallops in Kilmacthomas once more, it would be naive to suggest Waterford will produce anything like their optimum next Sunday. But of course, a win would nonetheless prove welcome.
Meanwhile, the McGrath Cup winners will seek to hit the ground running and pull off a repeat of their surprise win over the Rebels at ‘Fortress Clashmore’ 12 months ago in a rare foray into An Ghaeltacht.
With Laurence Hurney on board as selector and Ephie Fitzgerald signed up as the Deise’s coach, Tom McGlinchey is hopeful that the promise yielded by another positive January will not dissipate come the National Football League campaign.
Cork will come into this weekend’s game with the advantage of having already played, seeing off Limerick in Mallow by 1-10 to 0-12 on Sunday last, thanks to two late points from Daniel Goulding.
The Rebels, under new management in Peadar Healy, fielded an experimental side and one would expect something similar from the men in red on Sunday next.
Cork, of course, will travel to Ring as favourites. The new players brought in for the Limerick match will be hoping to get another run out this weekend, hoping to stake a claim for a starting berth come the NFL campaign.
For Waterford, the emphasis will very much be on producing a performance, while also hoping that lightning may indeed strike twice against their illustrious neighbours.
Also down for decision this week, at least provisionally given the lamentable weather of late are the Eastern Under-21 ‘A’ Hurling Final between Mount Sion and De La Salle (Carriganore, Thursday, 7.30pm), with the subsequent County Under-21 Final against Dungarvan due to be played in St Molleran’s on Sunday next at 11.30am