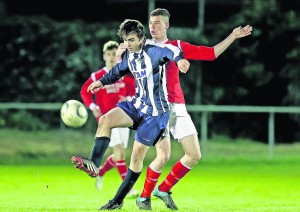 The first ever Inter League game to be played under the new floodlights in Ozier Park proved a disappointing affair for the local league.
Waterford had won their opening fixture away to the Desmond League from Limerick but they rarely looked like repeating that success against an extremely strong Cork outfit who had a number of extremely talented players within their ranks.
No one could fault Waterford for effort but for long stretches they were left chasing shadows by the visitors.
Cork created the first chance on 11 minutes when Dean Swords got down the left channel before crossing into the penalty area and after Blues defender Alex Browne headed the ball clear, midfielder Patrick Crowley failed to hit the target with his left-footed shot from 16 yards.
The visitors struck for the breakthrough goal ten minutes later when a throw from the left side from Scott McCarthy caught out the Waterford defence as Dean Swords took full advantage to crack a brilliant left-footed shot past Craig Dunphy from 12 yards.
A stunning save from Waterford keeper Craig Dunphy kept his side in the tie three minutes later when Shiprim Gashi fouled Ciaran Kearney on the left side of the penalty area and O’Regan’s free kick was magnificently tipped onto the bar and over at the expense of a fruitless corner kick.
With timing ticking down at the end of the first half, the home side levelled when a long ball from keeper Craig Dunphy saw Kyle Collins slip the ball in for centre forward Micheal O’Neill and he brought the ball onto his left-foot before slotting it past keeper Owen O’Sullivan from 14 yards.
Cork got their noses back in front on 51 minutes when a long ball from central defender Troy O’Sullivan picked out striker Jordan O’Regan and after controlling the ball superbly, he beat keeper Dunphy with a stinging right-footed shot from the edge of the penalty area.
A third goal for the visitors arrived less than three minutes later when the Waterford defence was caught out again from a throw in as O’Regan found Darren Murphy in space on the right side of the penalty area and he beat Craig Dunphy with a powerful right-footed shot from an acute angle.
Jordan O’Regan turned provider once again for another Cork chance on 63 minutes when he sent in a great cross from the right that picked out Ciaran Kearney, who looked certain to score but his left-footed strike was just inches wide of Dunphy’s near post.
The Leesiders then notched their fourth goal when Dean Swords got on the end of a through ball down the left after the Waterford defence failed to deal with the ball and his cross picked up Jordan O’Regan for a simple finish from deep inside the penalty area.
WATERFORD LEAGUE: Craig Dunphy, Eoghan Rea, Corey Gallagher, Seanie Martin, Alex Browne, Shiprim Gashi (Dean Kiely `55), Daniel Ogundele, Ethan Phelan, Micheal O’Neill, David Walsh (Brandon Mylett `81), Kyle Collins (Wale Yusuf `63)
CORK LEAGUE: Owen O’Sullivan, Bryan Cotter (Chrissy Hull `58), Scott McCarthy, Troy O’Sullivan, Matthew Draper, Shay Daly (David Hurley `68), Darren Murphy, Patrick Crowley, Jordan O’Regan, Dean Swords, Ciaran Kearney (Matthew Whelan `83)
REFEREE: Paul Butler assisted by John Ferncombe and Gavin Keyes