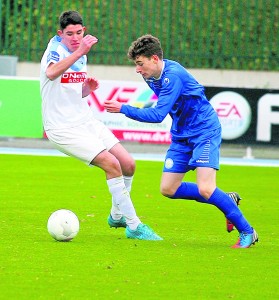 A Waterford United team who had already qualified for the last eight knock-out stage and who were missing a number of regular players proved no match for a slick moving UCD team at the RSC on Saturday afternoon last.
The visitors from Belfield held all of the aces throughout and condemned Blues to what was only their fourth defeat of the season.
Hopefully this defeat will act as a wake up call for Gary Power’s young team.
The visitors took the lead with their first attack on seven minutes.
Neil Farrugia got free down the left side of penalty area before crossing for centre forward Sean McDonald, who powered a header past keeper Jack Dolan from deep inside the penalty area
McDonald waltzed in for this second on 15 minutes when he linked up with Dylan Rowe before slipping the ball to Sean Quinn, who fed the ball back to McDonald who finished with the outside of his right-foot past a helpless Jack Dolan.
The rampant visitors increased their lead with their next attack seven minutes later when Farrugia got too much space down the left side before sending the ball to the back post where winger Brandon Perry beat keeper Dolan with a left-footed finish from ten yards.
UCD added a fourth goal with five minutes remaining in the first half when a defensive header fell straight to Brandon Perry out on the right side where his cross picked out Jack Ryan and he beat keeper Jack Dolan with a close range finish.
Sean Roche scored a stunning goal for the Blues to give them a lifeline two minutes into the second half when he picked up possession of the ball on the left side of the penalty area before skipping past four players to beat keeper Tom Murphy from 12 yards
Blues keeper Jack Dolan produced a top quality save on 56 minutes when Cian Flanagan fouled Sean Quinn on the left side of the penalty area but the well struck free kick from Luca Lovic was superbly tipped over the bar at the expense of a fruitless corner kick.
When UCD keeper Tom Murphy dropped a delivery from a Walsh right-wing corner kick on 74 minutes, the ball fell into the path of Darragh Corcoran hooked a right-footed from deep inside the penalty area just over the visitors crossbar as the Blues pressed for another lifeline back into the game.
Darryl Walsh brought the best out of Murphy less than three minutes later when the defender cracked in a fierce drive from the left-side of the penalty area that seemed destine for the roof of the net but the ball was clawed around the posts for a corner kick that saw Sean Roche have a close range effort also kept out.
WATERFORD UNITED: Jack Dolan, Dean Beresford, Darryl Walsh, Darragh Corcoran, Sam Hickey (Shane Ryan `46), Cian Flanagan, Adam Feeney (Tommy Teer `58), Justin Croke, Gearoid Murphy, Sean Roche, Sean Martin (Jordan Molloy `46)
UCD: Tom Murphy, Evan Farrell, Dylan Rowe, Joe Manley, Luke Boore, Jack Ryan (Yaya Camara `83), Brandon Perry (John O’Keane `74), Luca Lovic, Sean McDonald (Ryan Hannon `74), Sean Quinn (Ryan Meaney `68), Neil Farrugia (Mark Dignam `83)
REFEREE: Adam Tszample assisted by Christopher Maher and Noel Purcell