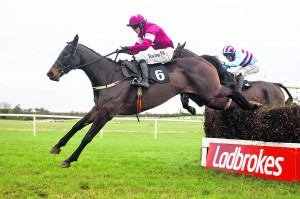 It’s always endearing to see the return of a top-class steeplechaser from injury and the 2013 Cheltenham Gold Cup runner-up Sir Des Champs overcame a lengthy absence to win the Boomerang Animal Bedding And Boomerang Horse & Country Store at Thurles on Thursday of last week.
The Willie Mullins-trained Sir Des Champs, absent since finishing fourth in the 2013 Lexus Chase at Leopardstown in December of that year, looked a somewhat unlikely winner as Rubi Light still held a commanding advantage before the second last.
Sir Des Champs however quickly moved into top gear with Bryan Cooper and the Gigginstown House Stud-owned nine-year-old took command before the final fence to beat Rubi Light by a comprehensive two and three quarter lengths.
Sir Des Champs, who came into this race with a 173 rating, is now likely to contest the Grade 1 Lexus Chase over three miles at Leopardstown on December 28th.
Mullins went onto complete a double as Myska easily justified odds-on favouritism with Ruby Walsh in the Thurles Mares Maiden Hurdle. Myska, owned by the Supreme Horse Racing Club, survived a slight mistake at the final flight to thwart Princess Lir by one and three quarter lengths.
Walsh similarly departed with two winners for he was later on the mark with Pat Fahy’s Micras in the Horse & Jockey Handicap Hurdle. The four-year-old filly Micras overcame slight interference on the run-in to lead as the line approached en-route to defeating Shay Barry’s Lake Field, whom she was in receipt of six lbs from, by a half-length.
There was racing at Gowran Park on Saturday and Henry de Bromhead’s phenomenal season continued when the local Knockeen-based handler sent out Smashing to win the Morrison BMW Chase.
The 145-rated Smashing, who finished a fine third in last season’s Grade 1 Powers Gold Cup at Fairyhouse, had Tennis Cap for company at the head of affairs until going for home from the third last.
It was soon all plain sailing as the victorious French-bred six-year-old stayed on stoutly for Johnny Burke to contain Followmeuptocarlow by four and a half lengths.
Smashing seems a horse that should attain quite high-profile success this season and he’s now likely to be seen in action during the festive period.
Sean Flanagan is in the midst of a purple patch at present and the Co Wexford-based jockey partnered his first winner for Noel Meade aboard former top-class hurdler Monksland in the Irish Stallion Farms European Breeders Fund Beginners Chase. The eight-year-old Monksland led from before the third last to see-off favourite Roi Des Francs by one and a half lengths.
Willie Mullins has an embarrassing array of talent at his disposal this season and the Closutton maestro took the wraps off Douvan who made his first start over fences a winning one by coming home as he pleased in the Irish Stallion Farms EBF Beginners Chase at Navan on Sunday. Douvan, a Grade 1 novice hurdle winner at last season’s Cheltenham festival, made all the running with Ruby Walsh to beat Rogue Trader by an unchallenged nine and a half lengths. Douvan will more than likely be upped in grade on his next start over the larger obstacles.
Mullins went onto to complete a double when Augusta Kate, a Yeats-sired daughter out of Colm Murphy’s former prolific winning racemare Feathard Lady, hardly came out of second gear with his son Patrick in the closing Coolmore NH Sire EBF Mares INH Flat Race. The four-year-old Augusta Kate effortlessly assumed command in the valuable listed contest approaching the final furlong and she duly defeated Cashelard Lady by an unchallenged seven lengths.