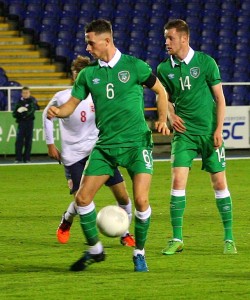 Storm Barney battered the region in the hours leading up to the U21 friendly between Norway and Republic of Ireland last Tuesday but the game itself at the RSC was a rather tame affair that resulted in a nil all draw.
The Republic of Ireland and Norway played out a rather tame draw in this international played at the RSC on Tuesday last.
The Irish team and the supporters were in great spirits following the terrific victory over Bosnia and Herzegovina the previous evening at the Aviva Stadium at full international level.
Norway on the other hand were not so happy because their senior team had lost out to Hungary in their play-off games and as a result they missed out on Euro 2016.
The Irish U21 manager Noel King was hoping his side would be capable of recording a victory having lost 3-1 away to Lithuania the previous Friday but they could not find the net and he will be hoping for more firepower up front when they play Italy at the RSC in March.
That will be a must win game to keep any realistic hopes of qualifying for the U21 European Championships alive.
Ireland created the first opportunity on eight minutes when midfielder Harry Charsley took possession on the left side of the penalty area but his well struck effort was just off target before the same player did have the ball in the net but it was ruled out by the offside flag of Waterford’s Adam Tszample.
Norway should have went in front on 19 minutes when a brilliant delivery from left-winger Alexander Sorloth to the back post found the head of the unchallenged Iver Fossum but he failed to hit the target of the goal guarded by Ireland goalkeeper Eric Grimes.
Charsley called the Norwegian keeper Per Kristian Bratveit into a smart save on 33 minutes when he took a pass from Sean Kavanagh but his left-footed effort was well saved before the ball was hacked clear by defender Thomas Grogaard to the relief of the visiting bench.
Sean Kavanagh brought the best out of the visiting netminder six minutes later when he cracking in a stunning strike from outside the penalty area that looked destine for the bottom corner of the net of the net but Bratveit sublimely tipped the ball around his right-hand post.
The brilliance of Kavanagh nearly unlocked the key to the Norway defence with the first chance of the second period on 48 minutes when he put the ball onto the head of Conor Wilkinson with a left-wing delivery but substitute keeper Sondre Rossbach made a fantastic save to claw the ball over the bar.
With the remainder of the tie failing to reach any great heights, it came as no real surprise that the game petered out to its scoreless conclusion.
The Republic of Ireland U-21 will return to the RSC when they take on Italy in an UEFA U21 Qualifier on Thursday, March 24 in what will be a massive game for manager Noel King and his squad of players following that recent defeat in Lithuania.
REPUBLIC OF IRELAND: Eric Grimes (Ian Lawlor `46), Sean Hoare, Lee Desmond, Darragh Lenihan, Shane Griffin, Alan Browne (Seani Maguire `88), Harry Charsley, Sean Kavanagh, Conor Wilkinson, Dylan Connolly (Brandon Miele `83), Kevin O’Connor (Noe Baba `83)
NORWAY: Per Kristian Bratveit (Sondre Rossbach `46), Kristoffer Haraldseid, Jonas Gronner, Thomas Grogaard, Anders Trondsen (Morten Agnes Konradsen `61), Fredrik Aursnes (Martin Ronning Ovenstad `46), Eirik Hestad (Ghayas Zahid `61), Alexander Sorloth (Morten Thorsby `70), Petter Strand, Iver Fossum, Ulrik Yttergard Jenssen
REFEREE: Bryn Markham Jones (Wales) assisted by Michelle O’Neill (Wexford) and Adam Tszample (Waterford)