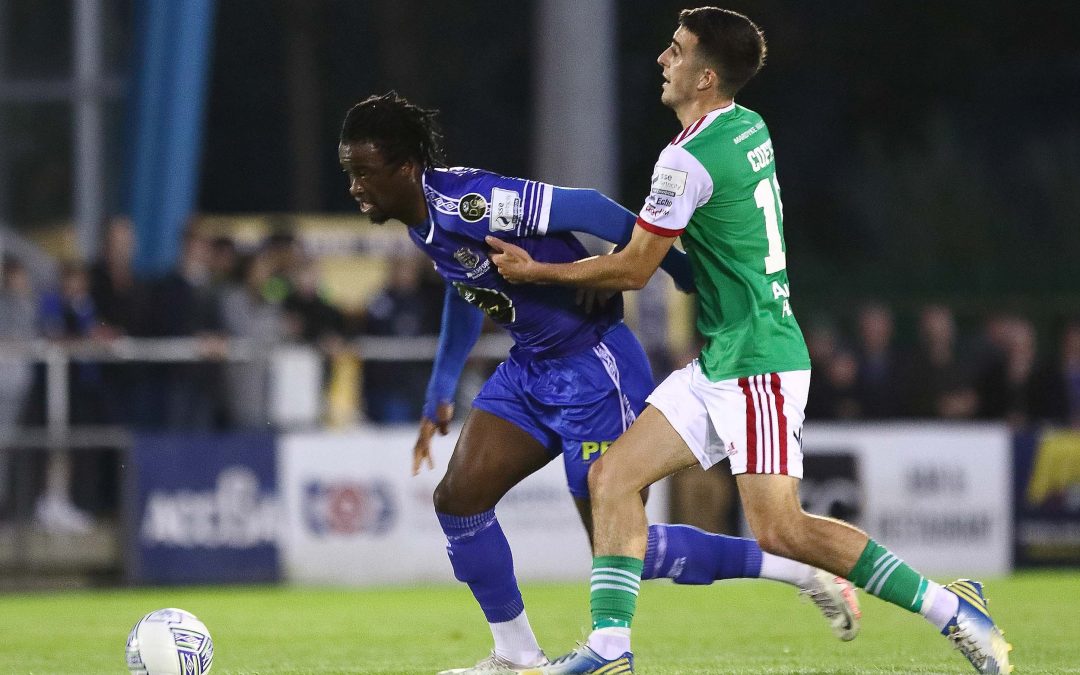 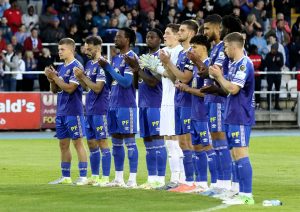 The Waterford FC team joined in a minute’s applause for the late Jack de Bromhead and the late Dale
Byrne, a great Waterford FC supporter.

game as owner of the club, it was a sensational finish to the tie that saw the equaliser and Cork’s match-

winner arrive in the dying minutes.

Not for the first time this season the referee was the main talking point when the game came to an end.
Alan Patchell let everyone in the stadium know he was in charge of this game which really took off
following a rather tame first half.
His red card shown to Tunmise Sobowale appeared to be extremely harsh and the penalty awarded to
Cork City deep into stoppage time was hard to fathom also.
It looked as if Ally Gilchrist just threw himself on the ground and in doing so he won a spot kick for his
side. 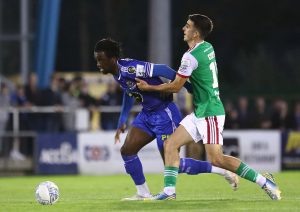 Patchell also red-carded the Waterford manager Danny Searle following the full time whistle.
This was the third time this season that the Leesiders had defeated the Blues and they are now champions
elect.
Waterford showed two changes from the side that drew with Wexford the previous week.
Richard Taylor and Niall O’Keeffe returned from suspension and Dean Larkin and Yassine En-Neyah
returned to the substitutes bench.
Raul Uche became the first ever Spanish born player to play for the Blues when he came with 15 minutes
remaining.
He went on to score and set up an incredible finish to the contest but alas it was not to be for the home
side.
There was a nervy moment for Blues defender Tunmise Sobowale inside a minute when he just got his
hand out of a way of a Ruairi Keating shot, and when the ball came back into the area for Barry Coffey,
his header was saved by Paul Martin. 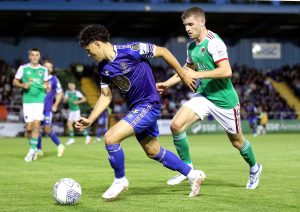 Matt Healy cracked in a shot from distance soon afterwards that took a deflection off the Blues defence,
but keeper Martin saved, before Junior Quitirna burst through the other end on 12 minutes only for Healy
to get back with a vital block.
Paul Martin got a brilliant hand to a teasing Keating right-wing cross on 21 minutes with the rebound
from Cian Bargary saved at the near post before the visitors had another chance five minutes later, but
Ruairi Keating volleyed over after a long throw from Cian Bargary.
A disappointing first-half sparked into life when Cork City struck the front on 55 minutes when Matt
Healy sent over a left-wing delivery that saw Barry Coffey’s shot saved by keeper Paul Martin, but Cian
Murphy hammered the close-range rebound to the net.
The game swung big time in favour of the league leaders two minutes later as the Blues were reduced to
ten men when Tunmise Sobowale received his marching orders with a straight red card after clashing with
Cork midfielder Aaron Bolger.
This left the home side with a mountain to climb in trying to get back into the game, but they nearly
replied immediately when Roland Idowu fired in a shot from the top of the penalty area, but Bolger got in
a brilliant block.
The crossbar denied the hosts an equalising goal on 65 minutes when Phoenix Patterson whipped over a
brilliant left-wing corner that picked out the run of Darragh Power, but his close-range header came
crashing back off the woodwork.
Patterson put in a cracking free-kick from the right looking for the run of Wassim Aouachria on 78
minutes, but the striker failed to get on the end of the ball.
It was a super Phoenix Patterson corner-kick in the final minute that yielded the equalising goal for the
Blues when his delivery found the head of new Spanish signing Raúl Uche, and he planted a header past
David Harrington from six yards. 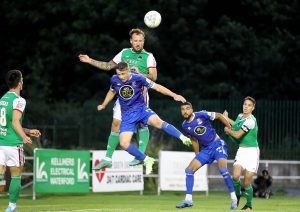