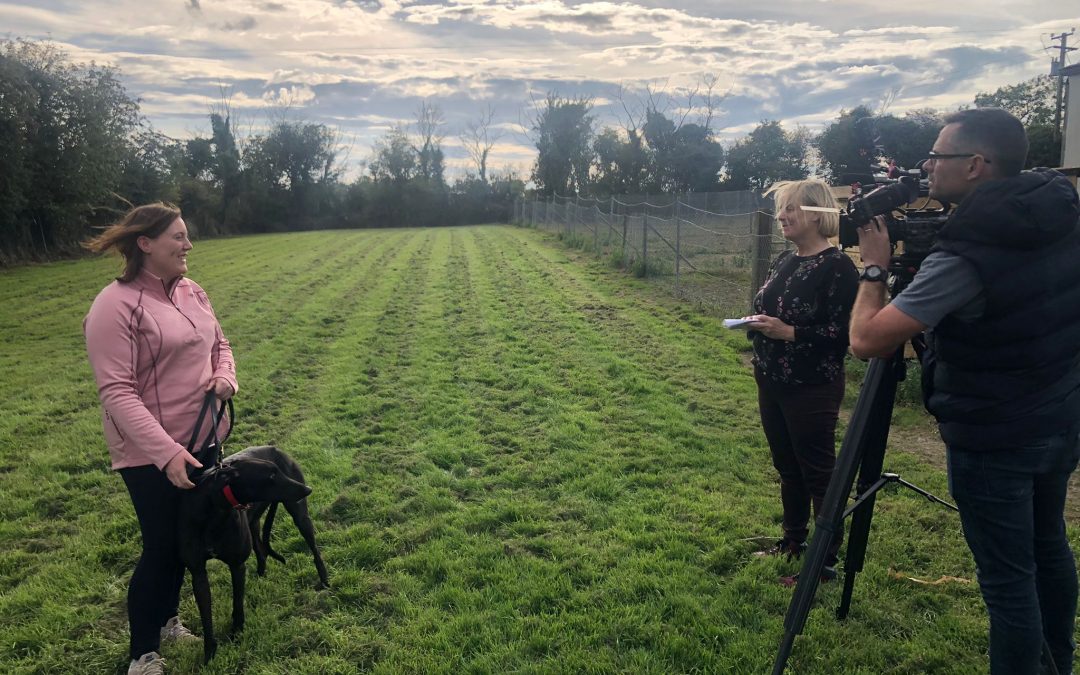 Ahead of the Irish Greyhound Derby Final at Shelbourne Park last month, I was asked by Rásaíocht Con
Éireann (otherwise known as Greyhound Racing Ireland) if I would be interested in interviewing the six
trainers with greyhounds in the final. The interviews would be part of Virgin Media 2’s live coverage of
the Boylesports Irish Greyhound Derby Final.
Although I had no idea until the weekend of the semi-finals where I would be travelling to, the timeline
suited me well and I was delighted with the opportunity to do something a little different.
The outcome of the semi-finals saw trainers from Co Galway, Kerry, Meath, Kilkenny and two from
Tipperary qualify for the final, to be run at Shelbourne Park on Saturday, September 24th

a lot of travelling to do around the country over a couple of days.
Day 1, Tuesday September 20th
:

My first port of call is to Peter Divilly, trainer of Crafty Kokoro in Claregalway, Co Galway. With an
early start on the Tuesday before the final, I decide it’s better to make the journey to Galway on Monday
evening.
The Clayton Hotel in Galway offers a reasonable rate and with my room boasting views of Galway
racecourse, I feel right at home.
Crafty Kokoro made her way to the final after some outstanding finishes and it was clear on arriving at
the Divilly kennels that trainer Peter and his family are quietly confident that if Kokoro or ‘Star’, as she is
affectionately known by her owners/trainers, can re-produce that flying finish, she will be in with a great
chance of victory.
With the interview in the bag and after a feast of delicious Divilly rashers, sausages and pudding, which
I’m reliably informed are available in Waterford, it’s on to my next stop, the kennels of Keely McGee
near Oldcastle, Co Meath, 177 kms from Clare Galway.
Thank goodness for the Galway/Dublin motorway as it certainly makes the journey to Co Meath
relatively easy.
Keely McGee is the trainer of Marie’s Wedding who was lucky to survive the first round of the Derby in
August, only qualifying as one of the fastest fourth place finishers.
Keely trains Marie’s Wedding, otherwise known as ‘Mesa’ for Tamara Butler and although she is a 6/1
outsider, Keely is adamant that if Marie’s Wedding can put in her very best performance, she will be there
or thereabouts.
Martin ‘Murt’ Leahy trains his dogs in Co Kilkenny and his ‘Village Kennels’, 150 kms from Oldcastle is
the final stop on day one.
Negotiating my way through the traffic coming from the Ploughing Champions at Ratheniska, Co Laois is
not the easiest of tasks but I eventually make it to Murt Leahy’s kennels to chat about the chances of
Droopys Nice One, the third bitch in the final.
Murt Leahy claimed a big prize in June when Raha Mofo won the Irish Oaks and the trainer is hoping for
another big win, although he readily acknowledges Droopys Nice One has it all to do, heading into the
final as the 12/1outsider.
Day 2, Wednesday September 21st
.

Travelling the road from Lismore to Mallow the following morning en route to the Ballymac Kennels in
Ballymacelligott, just outside Tralee,is without a doubt the most challenging part of the entire drive.
Having been caught behind multiple trucks and tractors, I vow never to travel the road again and I’m very
happy to have set off just after 7.30am for an 11.30am start.
The Ballymac Kennels of Liam Dowling are set in a beautiful part of the country. Nestled in the Slieve
Mish mountains with views of the Gap of Dunloe in the distance, I could easily spend what is a lovely
September day chilling in this lovely part of the country.
There’s work to be done though and Liam Dowling, who trained Ballymac Matt to win the Derby in 2015,
tells me he is quietly confident his 2022 finalist Ballymac Finn will run a huge race.
As reluctant as I am to leave Co Kerry, there’s two more interviews to complete and so I set off for the
150 kms drive to the Premier Kennels of Owen McKenna at New Inn, Cashel, Co Tipperary.
McKenna knows exactly what it takes to win the Derby, having trained Susie Sapphire to win the 2021
final. He’s responsible for 7/4 favourite Callaway Pro Am, who like Susie Sapphire, reached the final
unbeaten. Two-in-a-row is always going to be a tough ask but if anyone can do it, surely ‘Cal’ can.

My final visit is a drive of a mere 35 kms to the kennels of Jennifer O’Donnell outside Killenaule in north
Tipperary.
Although running a small operation O’Donnell is steeped in greyhound racing.
Her father Matt trained three Irish Derby winners while her mother Frances also trained an Irish Derby
winner. No pressure on Jennifer then! She however takes it all in her stride and is hopeful that Born
Warrior, affectionately known as ‘Nelson’ (after Nelson Mandela), will fly out of the traps, as he has done
throughout, and stay on to the line.
Having met all six trainers over my two-day road trip, I certainly had more interest in the outcome of this
year’s Derby final.
Born Warrior did, as Jennifer O’Donnell hoped he would, get off to a flying start and this time he stayed
all the way to the line to take the €125,000 first prize. Liam Dowling’s Ballymac Finn gave chase down
the home straight but had to settle for second while Crafty Kokoro was baulked at the third bend and had
to be content with third. Callaway Pro Am finished fourth while Marie’s Wedding didn’t run her best race
and came home fifth. Droopys Nice One finished sixth. 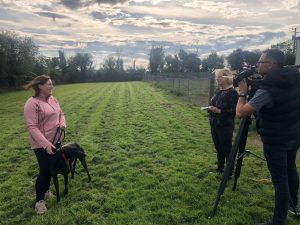 Getting the views of Jennifer O’Donnell, trainer of 2022 winner Born Warrior. 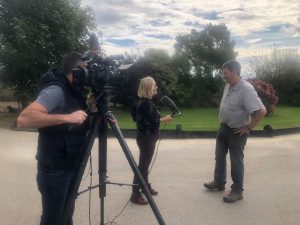