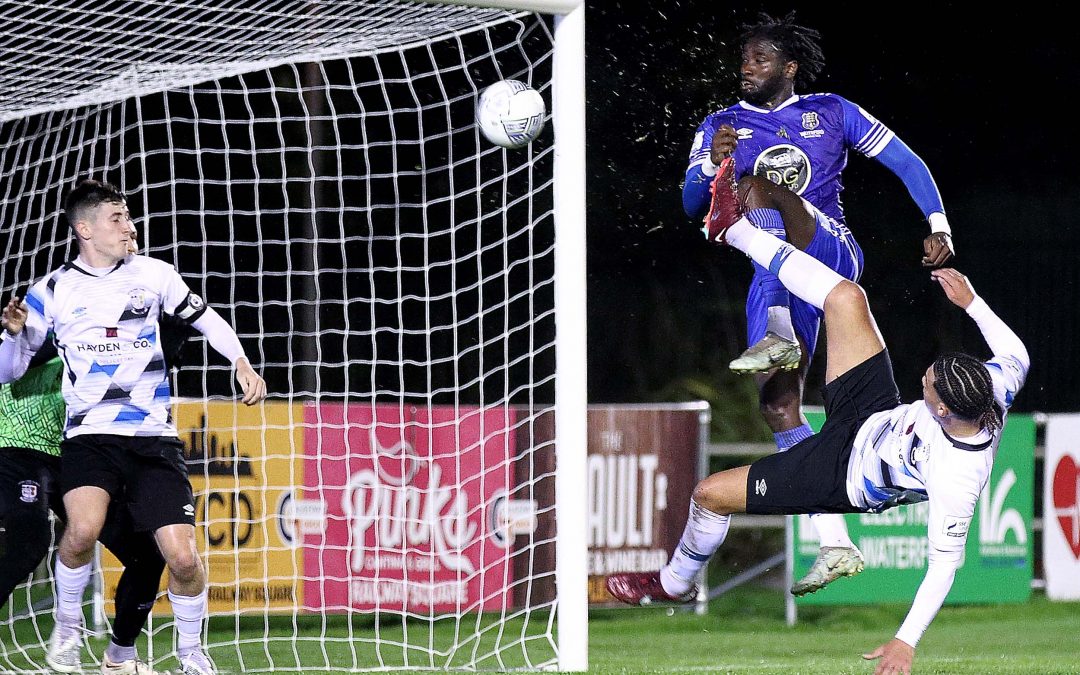 One fact was guaranteed this season. When Waterford FC and Athlone Town locked horns, the supporters
were treated to goals aplenty and that was the case once again on Friday night last at the RSC.
During the four meetings the Blues scored 15 while the midlanders netted 6 goals.
This was the fourth time Waterford defeated the visitors and that included two 5-2 victories.
Still smarting from the FAI Cup exit at the hands of Shelbourne the previous Sunday, the Waterford team
showed three changes from the starting eleven which started the cup semi-final.
Out went Raul Uche, Niall O’Keeffe (on the brink of suspension) and Roland Idowu (injured).
In came Wassim Aouachria, Yassine En-Neyah and Richard Taylor.
A three at the back policy was adopted for the first time this season and at times it looked as if it took
some time for the new setup to settle.
That said the hosts went in at the interval leading 3-0 and it looked as if the three points were well and
truly secured.
However, two quickfire goals by the midlanders turned the game on its head but Wassim Aouachria
scored his second goal of the match on 82 minutes to wrap up the points for Waterford.
A draw would have secured a two legged play-off against Treaty United so it was a case of ‘job done’
from a Blues point of view.
Danny Searle’s men will now have to prepare for those play-off games. The first-leg will be played at the
Market’s Field on Wednesday before Saturday’s return leg at the RSC.
Both ties will kick-off at 7.45pm.
Waterford created the first chance on six minutes when Shane Griffin pinged a ball down the left-flank for
Phoenix Patterson who turned his marker, but his curling effort went wide of the near post.
Waterford took the lead on 18 minutes when Phoenix Patterson swung in a left-wing corner-kick that was
touched on by Darragh Power for Richard Taylor, whose close-range header was saved, but Wassim
Aouachria headed the rebound home.
Patterson sent in another brilliant ball from a free-kick two minutes later, but neither Taylor nor
Aouachria could convert from close-range as the ball went wide of the far post as the Blues dominated the
contest.
It came as no real surprise that the second Waterford goal on the half hour mark came from the brilliant

Phoenix Patterson who took a pass from Darragh Power and found the far corner with an exquisite left-
footed finish.

A third Blues goal arrived on 39 minutes with another well-worked effort.
Darragh Power slipped the ball into the path of Aouachria, who played the ball back to the penalty spot
for Junior Quitirna and he finished a left-footed shot past Athlone keeper Vladi Velikin.
The second-half was four minutes old when the visitors pulled a goal back.
Jack Kavanagh swung over a left-wing cross that seemed to be controlled by the hand of Adam Lennon in
front of referee David Dunne, but he waved play on, and the youngster rifled a left-footed shot past a
helpless Paul Martin.
Darragh Power was harshly judged to have fouled Lennon on 52 minutes and it allowed Athlone the
chance to really get back into the game as defender Jarlaith Jones powered an unstoppable left-footed
strike to the far corner past Martin.
A goal of quality put the Blues back in the driving seat seven minutes later when Junior Quitirna showed
neat control to set Uche into the clear, and he crossed into the centre for Wassim Aouachria, who turned
brilliantly onto his right-foot and blasted the ball past Enda Minogue.
Waterford FC: Paul Martin, Tunmise Sobowale, Richard Taylor, Kilian Cantwell, Alex Baptiste (Dean
Larkin ’79), Darragh Power (Jeremie Milambo ’86), Shane Griffin, Yassine En-Neyah (Timi Sobowale
’79), Junior Quitirna (Remi Thompson ’86), Wassim Aouachria, Phoenix Patterson (Raúl Uche ’68). 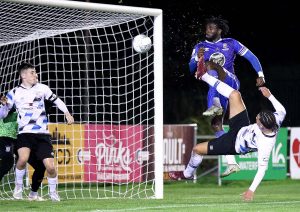 Waterford FC’s Richard Taylor had this effort saved by Athlone Town goalkeeper Vladi Velikin but
the rebound was headed to the net by Waterford FC’s Wassim Aouachria. 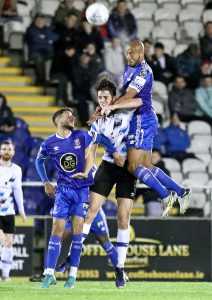 A towering header from Waterford FC’s Alex Baptiste over the back of Athlone Town’s Patrick
Hickey. 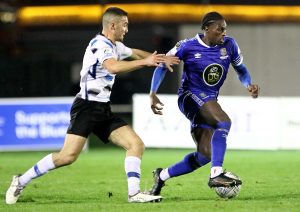 Waterford FC’s Tunmise Sobowale about to set up another attack for his side.