Rovers and Blues draw for a third time

League of Ireland, Premier Division
Sligo Rovers 0
Waterford FC 0
Sligo Rovers and Waterford FC cancelled each out for a third time this season when they met at the Showgrounds on Saturday night last. The two teams failed to score a goal when they first met at this venue and a few weeks later they drew 3-3 at the RSC. Following three defeats on the trot, the Blues were determined to get something from this game. Following a week which saw the departure of Bastien Hery to Lingfield, manager Alan Reynolds made three changes to the side which lost 2-1 to St Patrick’s Athletic the previous week. 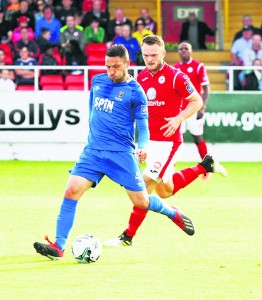 J.J Lunney replaced Hery while Tom Holland came in for John Martin and new signing Michael O’Connor made his debut. Dean Walsh was the player who made way for the player signed on loan from Lingfield.
Sligo Rovers started brightly but Blues defender Maxim Kouogun was alert to clear from Romeo Parkes.
At the other end, Tom Holland’s quick-thinking free kick found the run of Michael O’Connor but it was well blocked.Michael O’Connor was threatening for the Blues and his header from Tom Holland’s free kick was narrow over Ed McGinty’s crossbar.On 16 minutes Matthew Connor produced a stunning save from Romeo Parkes and the Blues keeper denied the home side the lead two minutes later when he made a great save from a Parkes penalty after a Michael O’Connor foul on Danny Kane and then did brilliantly to save the rebound from Ronan Murray.
JJ Lunney went close for the Blues midway through the first half when he beat three players but his right-footed strike was narrowly wide.The Blues had the first attack of the second half but Shane Duggan saw his free kick blocked and JJ Lunney’s strike was off target. On 68 minutes Cory Galvin had a good chance to try make the Blues possession count but his powerfully struck shot went over the bar.
Minutes later the Blues striker struck the post. David Cawley fired straight at Matthew Connor before the Blues had a great chance for the opener.
Alan Reynolds brought on another new signing, William Fitzgerald to partner Michael O’Connor up front with 14 minutes of play remaining. Dean O’Halloran was the player who was called ashore.
Shortly afterwards Tom Holland’s free kick wasn’t cleared and Maxim Kouogun made space but just couldn’t keep his left-footed strike down. Waterford had another great chance three minutes later when Cory Galvin set Michael O’Connor free but his powerful strike drifted narrowly wide of McGinty’s post.
Sligo Rovers were reduced to ten men when Dante Leverock picked up a second yellow card for a foul on Cory Galvin after 85 minutes.
The Blues pressed for a late winner but had to settle for a point in the end to stop a run of three successive defeats. Overall the Blues were the better team but try as they might they simply could not find the union sack for one reason or another.