Home » Sports » Sean Houlihan: “My mam thought I’d be back after a year to go to college”

Sean Houlihan: “My mam thought I’d be back after a year to go to college” 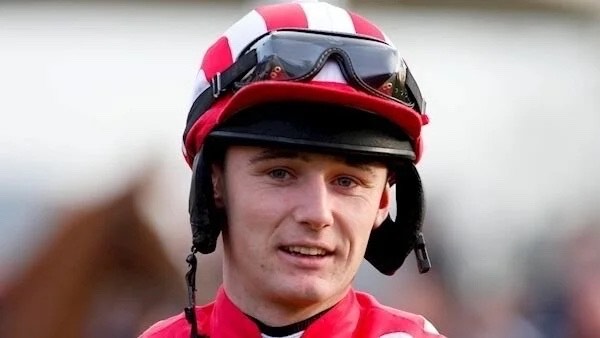 Jockey Sean Houlihan chats with the Munster Express on his career, brotherhood and future ambitions

When Sean Houlihan headed to England after sitting his Leaving Certificate, his mother thought he’d be back in a year.

Seven and a half years later and there’s still no sign of him – but there’s been a multitude of successes squeezed in between, with Houlihan now just 14 wins away from professional jockey status, and younger brother Niall now also making a name for himself.

The Brickey man has been based with Philip Hobbs ever since first departing the Emerald Isle, and caught up with the Munster Express on Friday afternoon last having finished 3rd in a novice hurdle and 6th in a handicap hurdle at Newbury, while brother Niall also finished among the places. He rides as a conditional jockey with Gary Moore in West Sussex.

To say the Houlihans are steeped in racing pedigree would be an understatement. Their grandfather was a renowned producer of racehorses, while uncles Pat and Maurice Phelan have both trained, with Sean riding winners for both of them. Their uncle Eamon bred the 1993 Cheltenham Gold Cup winner Jodami, while on the fathers side – the Houlihans’ late uncle Johnny rode for Francis Flood and Phonsie O’Brien. David Kiely of the famed Kiely brothers is an uncle through marriage, with John Kiely also someone the Houlihans would’ve grown up around. Cheltenham winning jockey and trainer Emmet Mullins is also a first cousin – but despite all the connections, Sean was keen to stress to the Munster that racing is something that the pair were never forced into.

“We’ve definitely been around good people. Mam and Dad never really worked in racing, Dad rode out in a few point-to-pointers but it was in the rest of the family. We got our first pony when I was about 11 or 12 and we never really looked back from there. They never stopped us from going into racing. Mam thought when I came to England seven and a half years ago that I was going for one year and that I’d come back to go to university afterwards but in fairness they never stopped us from going into it, and at the same time – we were never forced to go into it.”

While there may have been an expectation from people to head down the racing route, the reasoning behind the excursion for the Houlihan brothers wasn’t out of any familial duties, it was purely on the basis of a love for the sport.

“100%. It was something that I just always wanted to do. I remember going into the career guidance counsellor in St. Augustine’s College, Ms. Elaine Moore and she was asking me what was I planning on doing when I was in sixth year – and I said I’m going to be a jockey. She said fair enough and whatever but at the same time she tried to get me to apply for a few college courses which I did – but I just always wanted to be a jockey. I love the support we get, I love racing and I love horses, and to me it just seemed to be a case of natural progression when I finished my Leaving Cert to go to England and just give it a go.”

Sean has been based with Philip Hobbs ever since leaving for England and has learnt the trade from the likes of champion jockey Richard Johnson among others. He describes Hobbs as ‘a great boss’ and ‘a gentleman’. 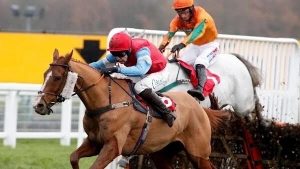 “They run a tight ship and it’s a good yard to be in. I get plenty of rides off them and I do get a fair few winners off them, like I’d love to be getting a bit more but there’s a pecking order there and you just have to bide your time – Dickie (Richard Johnson) is number one, Tom O’Brien is number two and then myself and Ben Jones are the conditional jockeys. There’s a pecking order but in fairness we all get our rides and we all get our winners. It’s great to be based in a yard like that because when I was starting out – I probably got plenty of rides just on the premise of being based here. I built up plenty of contacts too and over the years, that’s definitely helped.”

As years have gone by, Houlihan admits that he has felt himself getting better with time as part of a sense of natural progression, and says experience is standing to him.

“I’d like to think I’m getting better anyway with all the rides I’m getting and the experience too. As long as I can put it to good stead and just keep going forward. We’re down a small bit on the numbers but that’s only natural because you will have lull periods. I’m on ten winners for the season, my best is 20. There’s only about six or seven weeks left and it’ll be tough to get to that level – I’d need a good run, but if I rode one or two more winners and kept my head down going into the summer – who knows I might be back up to the 20-winner mark again now next season.”

Sean struck gold with a 1182-1 treble at Hereford before Christmas, something he describes as one of the good days.

“After lockdown and COVID, I think I had two winners up until then and it was a bit slow both rides-wise and winners-wise and then I went to Hereford that day for Sheila Lewis and I was lucky. Ben Jones ended up going to Huntingdon so I picked up another one of Sheila’s called Knight Commander which I’d never ridden before and haven’t ridden since. Yeah, it was great to win three there. I quietly fancied my chances on Straw Fan Jack. The horse was unexposed and I felt he’d improve. I actually got a fall off him the month before at Bangor and tore my lung, but I felt that he’d be in the first three that day, and Cotton End was a humdinger last season. She started off among the lowest grades and was definitely competitive off a mark of 115, we were always wondering when going up the grade would catch her out – but thankfully, it didn’t catch her out that day.” 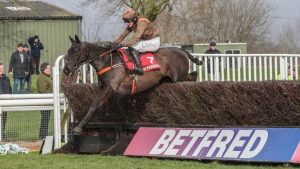 Sean Houlihan elicits another fine leap from Regal Flow as the 11-year-old gallops to victory
in the Midlands National.

Despite being overseas for a long time now, Sean says the support from home is stronger than it has ever been over the last seven years. The support became all the more apparent to them after a day of success at Plumpton.

“It’s stronger than ever, especially since lockdown. You’d go home in the summer and have everyone telling you you’re getting on great. When you’re out for a few pints with the lads and looking for a nice quiet night and people start chatting away to you about the racing – it’s great. Myself & Niall were just talking about it the other day. There was one day at Plumpton where he had two winners and I had one. It was just a run of the mill meeting. It was a Monday, there was nothing spectacular in the races we won but the amount of messages the two of us got after it – you’d swear we were after riding Saturday winners. It’s great. We’ve got a great local support behind us – we still have all our friends from school. We’ve friends from the Brickey Rangers and all the other GAA Clubs around Dungarvan and it’s fantastic to have.”

Being a jockey is a dream come true for Sean but being able to share the career with his brothers Niall and Conor certainly makes it all the more special.

“It’s brilliant to have the success between us all. Unfortunately for Conor, he’s very tall and weight will be a struggle for him over the next few years so myself and Niall really get a lot of pleasure out of seeing Conor ride winners. We know it’s probably not going to be a prolonged career for him and what it’s like to be doing light weights. If I’m not in the race I’m shouting for Niall and I’d like to think vice-versa, but we wouldn’t give each other an inch on the track, that’s one thing for sure.”

The brothers give each other credit where due, and their healthy competition has proved a boost to their parents as it doubles their chances at welcoming success! 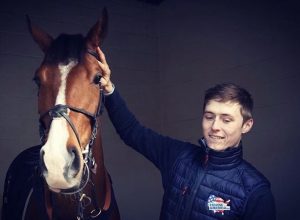 Sean’s younger brother Niall is making a name for himself in racing having had an impressive
string of winners which saw him ride out his 7lb claim.

“We will congratulate each other. There’s been a couple of times where I’ve beaten Niall and Niall’s beaten me and we’d be saying ‘well done’ but at the same time, it’s well done but I can’t speak to you for a few minutes until I calm down. That’s the way it is, but sometimes even though I find it great when Niall’s won, we do have that extra little bit of competitiveness between us. It’s healthy. It’s great for Mam and Dad when we jump the last and the two of us are upsides – they don’t shout but they know at least one of us are going to win!”

Going forward, Sean plans on taking things as they come and keep them going the way they’re going.

“The last few weeks have been very busy for me which is brilliant. Of course I’d love to ride more horses and have more winners, but the main aim is to stay injury free and to stay fit and healthy. My next aim would be to ride my 3lb claim out and become a fully fledged professional jockey. I’m 14 winners off that and in the long run, get on a better quality of horse and hopefully win these better quality races.”

Sean went on to speak of his pride in how well Niall has been doing, and hopes to ride in the Martin Pipe Conditional Jockeys’ Hurdle at the Cheltenham Festival. 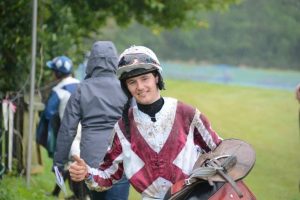 Whatever the Houlihan brothers are doing, they’re doing something right. As was signed off on this interview by Sean, we’ll keep riding winners and giving you something to write. The future is bright for the Brickey based brothers, who display a modesty with their abundance of talent that can only serve them positively in future.