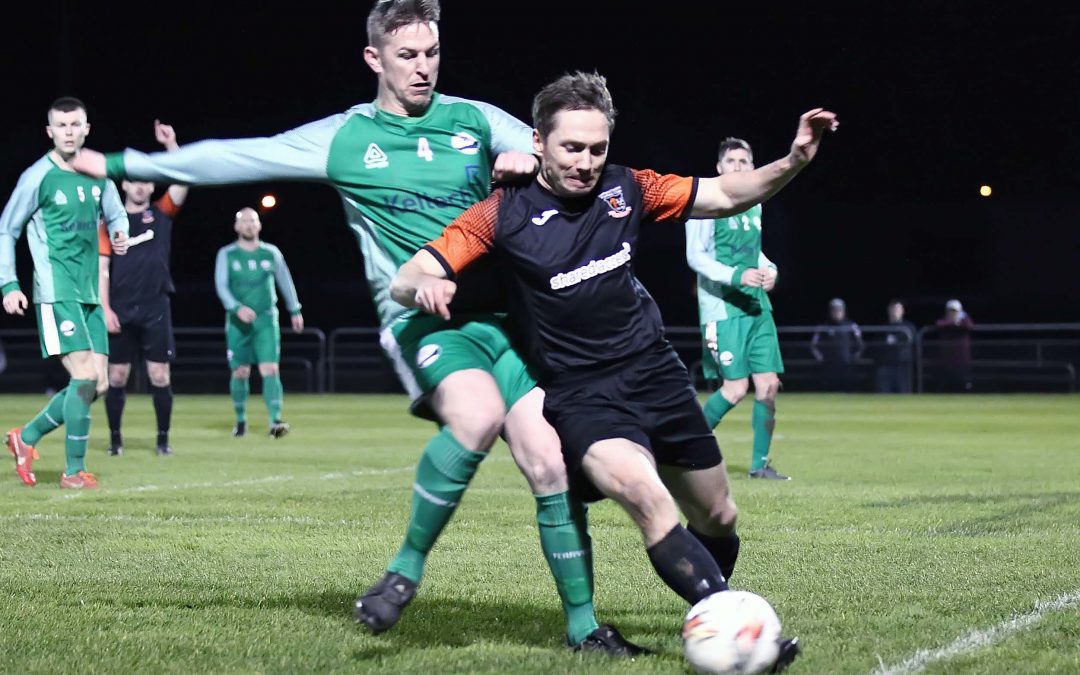 Matt Keane
Ferrybank got back into the title race on Friday night at the Village Grounds in Abbeylands by defeating struggling Southend United.
Two goals inside the opening ten minutes put the hosts in the driving seat and they never looked in any real danger during the remainder of the contest.
Southend remain on a total of three points from their campaign to date and are battling to avoid relegation.
Richard Gaffney’s side got off to a flying start by scoring with their first attack of the game after just two minutes of play.
Eoin Rhodes played a wonderful through ball to Meshac Babatu and he found the net after rounding the visiting goalkeeper Graham Cleary. 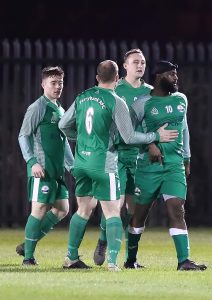 Ferrybank’s Meschac Babatu is congratulated by his Ferrybank team mates after opening the scoring in the first half. PHOTO: Noel Browne

Six minutes later the young Ferrybank goalkeeper Billy Griffin did well to save a free–kick taken by Paul Carey.
The home side doubled their advantage on 10 minutes. Paul Phelan whipped over a superb crossx from the right. Graham Cleary tried to catch the ball underneath his crossbar but he was unable to do so and when thed ball fell to Ethan Phelan he had the easy task to tap the ball over the line from close range.
The visitors were creating very little at this stage and they were depending on set pieces for their opening.
Jack Twomey hammered in a free-kick from 30 yards on 23 minutes but his effort did not trouble Billy Griffin in between the Ferrybank posts.
Ferrybank almost made it 3-0 on 37 minutes when Meshac Babatu cracked in a low drive from 20 yards but Graham Cleary did remarkably well to turn the ball around his right upright.
The visitors went close after 39 minutes when Paul Carey picked out Aaron Connolly but he ran into a tight angle and all he could do was hit the side netting.
The home outfit had a really good chance on 55 minutes when Paul Phelan crossed to Meshac Babatu but he headed high over the crossbar from a great position. 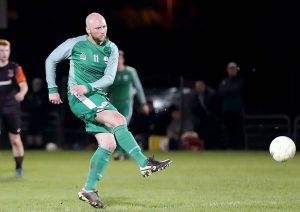 Four minutes later at the other end Jack Twomey rattled the Ferrybank upright with a crisp shot from eight yards.
Justin Croke, who was only on the pitch for six minutes, put Ferrybank three goals in front on 71 minutes when he tried his luck from 30 yards and the unsighted Graham Cleary was unable to prevent the ball entering thed back of the net. Goal number four arrived in the 83rd minute. Eoin Rhodes whipped in a fierce shot from outside the penalty area and when Graham Cleary parried the ball, Justin Croke stroked home his second goal of the game. Eoin Rhodes completed the scoring one minute later by brilliantly finishing off a neat pass from Thomas Whitty. 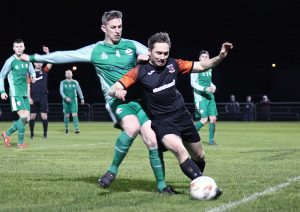