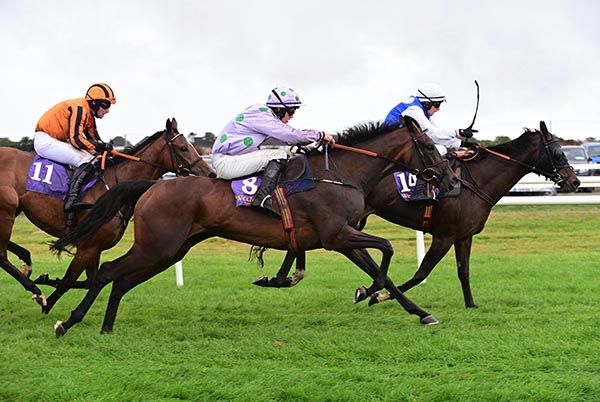 Neil O’Donnell
The racing action last week commenced on Monday August 29th with meetings at Downpatrick and
Roscommon. There was a jumps meeting at Downpatrick and the Joseph O’Brien-trained Uhtred recorded
a facile success in the Dara Gapska Miss Northern Ireland Opportunity Beginners Chase. On what was his
initial start over the larger obstacles, the seven-year-old Uhtred was always positioned close to the pace
with first-time partner Richie Condon and he stylishly made his way to the front on the run-in to beat
Blackstair Rocco by eight and a half lengths in the familiar Gigginstown House Stud silks.
Also the winner of a Downpatrick hurdle race in early August, Uhtred was scheduled to be offered at this
Wednesday’s Goffs UK horses in training sale at Doncaster.
Denis O’Regan is experiencing a good run at present and the Youghal native combined with handler
Shane Broderick to win the Downpatrick Best Dressed Lady Handicap Hurdle aboard Sphagnum.
A Sligo winner in mid-July that then finished second on his two subsequent outings, the five-year-old
Sphagnum was always positioned close to the pace and he assumed command from two out to dismiss
Rare Conor by a widening four and a half lengths. Sphagnum, who was fitted with first-time cheekpieces,
is owned by farrier Ray Loughnane from Shinrone and the five-year-old could now run at the Listowel
festival later this month.
At Roscommon’s flat fixture, the Jim Bolger-trained Dancila won the Lecarrow Race over one and a half
miles.
The five-year-old gelding Dancila, also homebred by handler Bolger, was posting his third success of the
campaign and the winning son of Teofilo benefited from frontrunning tactics by making all the running
with Kevin Manning to defeat Magellan Strait by one and three quarter lengths. It seems that the 90-rated
Dancila is improving the whole time and he should prove well capable of sampling further success
between now and the end of the season.
It was then onto Gowran Park on Wednesday for another flat meeting and Joseph O’Brien kept his many
supporters happy by sending out Zaynudin to record a well-supported success with Shane Crosse in the
closing Racing Again September 17th Maiden. 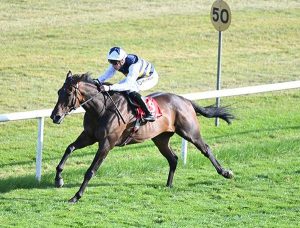 Zaynudin and Shane Crosse winning at Gowran Park on Wednesday.

The four-year-old Zaynudin was returning from a 10-month lay-off, having finished either second or third
on all five previous career starts in 2021, and the son of Fastnet Rock eased to the head of affairs over two
furlongs out to slam Pahlavi by 10 lengths. This race was over one mile six furlongs, the furthest that
Zahnudin has raced over to date and the likelihood is that he will now run over hurdles at some stage
whilst continuing to mix it on the flat.
There was also flat racing at Clonmel on Thursday evening and Goresbridge-based handler Tom Mullins’
Dazzling Spirit justified strong market support by triumphing in the St Patrick’s Well Handicap.
The 46-rated Dazzling Spirit stepped up from her most recent fifth-placed effort at Sligo in late June by
overcoming a somewhat tardy start with seven lbs claimer Jamie Powell by sweeping to the front inside
the final 100 yards to dispose of Cursory Exam by a widening two and a half lengths.
At Kilbeggan on Friday evening, Kilmacow native Donagh Meyler experienced a virtual armchair mount
aboard Emmet Mullins’ recent Tramore festival runner-up So Scottish in the Sean Hughes Memorial
Maiden Hurdle. So Scottish, a point-to-point winner at Corbeagh House in Co Longford last December,
eased through to lead after two out and he then swept clear to contain Pats Choice by a comprehensive
nine lengths. So Scottish was leased for the race to Alan and Conor Hughes and the race was run in
memory of the pair’s late father Sean Hughes. It’s likely that So Scottish will now run in a rated beginners
chase. 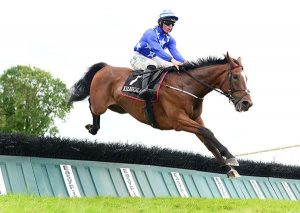 So Scottish gave Kilmacow native Donagh Meyler an armchair ride on way to winning for Emmet
Mullins at Kilbeggan on Friday.

Davy Russell is riding as good as ever at 43 years of age and the Youghal jockey was witnessed to terrific
effect by bringing the Gordon Elliott-trained mare Country Queen from well off the pace to land the Pat
Doyle Memorial Maiden Hurdle. Country Queen, a Bellewstown bumper winner in early July, stayed on
powerfully in the closing stages to edge past odds-on favourite Carrarea in the closing stages to oblige by
a neck.
There was racing at Navan and Wexford on Saturday.
At Navan’s flat meeting, Fethard-based handler Nicky Stokes’ filly Curraheen Princess continued her vast
rate of progression by posting her third success of the season in the PF ‘Mutt’ Conlon Memorial Handicap
over five furlongs. 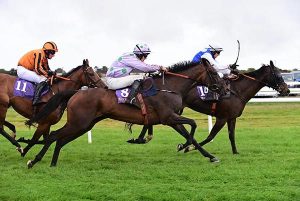 The Ronan Tynan Kellie’s Dream gets up to win at Navan.

The 81-rated Curraheen Princess, who was rated 64 when recording her initial victory of the year at this
same venue in late May, got into a lovely rhythm with Joe Doyle at the head of affairs and she was in no

mood to be denied in the closing stages as she held on valiantly to account for Tide Of Time by three parts
of a length. It’s probable that Curraheen Princess, representing Horse And Jockey hotelier Tom Egan, will
now be aimed at the Joe McGrath Handicap at The Curragh later this month on September 24th.
Meanwhile, the Andy Slattery-trained Kellie’s Dream continued the terrific run of success being
experienced by owner Dr Ronan Tynan (the acclaimed tenor) with his small string of racehorses by
winning the Dan Byrne Memorial Handicap Hurdle under seven lbs claiming amateur rider Cian Quirke.
Kellie’s Dream put some previously uninspiring form figures behind by making her way to the front in
the closing stages to deny the fast-finishing Search For A Myth by a neck. It’s probable that Kellie’s
Dream will now run in another handicap hurdle.
Bridgetown, Co Wexford-based handler Seamus Neville sent out his wife Ina’s Brideswell Lad to win the
Wexford Racecourse Racing Handicap Chase under JJ Slevin.
The late July Limerick winner Brideswell Lad had just picked up the running when not overly fluent two
out and the winning half-brother to Jonjo O’Neill’s talented staying chaser Cloth Cap then maintained the
momentum to account for Early Arrival by five and a half lengths. It’s probable that Brideswell Lad will
now run at the forthcoming Listowel festival.
Proceedings opened with a clearcut success for the Henry de Bromhead-trained filly Magical Zoe in the
Adare Manor Opportunity Maiden Hurdle for four-year-olds’. Magical Zoe, winner of a Cork bumper on
her only previous career start in March when under the care of Co Carlow-based handler Barry Fitzgerald,
arrived from off the pace with Conor Brassil to lead before two out en-route to dismissing Lenebane by
one and a half lengths. Magical Zoe, owned by Patrick Bryceland from Scotland, appears to be filly with
a particularly bright future.

DEEPEST condolences are offered to Henry de Bromhead and his wife Heather on the death of
their 13-year-old Jack in a fall at the Glenbeigh pony races in Co Kerry on Saturday. A twin
brother to Mia and older sibling to Georgia, Jack was a regular with his parents at the races. May
He Rest In Peace.